One little one did come up to Margueritte.  “We don’t hold with slavery neither,” he said, before he vanished into the woods.

“Of course,” Margueritte said.  That was one of her rules.  Then Roland got there to help her up while a whole crowd had gathered because of her cry.  They all laughed hard, with the great guffaws of her father sounding out above all.  Finnian, to preserve what remained of his dignity, pulled up his pants, only to hear them tear at the seam.  He had a smiley face painted on the butt of his slacks, and yes, the sign pinned to the back of his jerkin said, “Kick me”, in three languages.

Margueritte still giggled when she reached the inn to change for the night’s festivities.

The king’s house seemed festive, but on entering, she felt the air of tension underneath it all.  They had music, and though a couple of tunes were danceable, for the most part they were not.  Margueritte felt sure it was deliberate so as not to encourage the queen.  She thought it must have been nearly impossible for the musicians to fill a night with Breton music to which one could not dance.  They had food, also in abundance, and spread around numerous tables where one could help themselves whenever the urge might strike.

All felt wonderful, and Margueritte found herself quite shy despite being with Roland who became very gregarious and outgoing.  He seemed to know a lot of people for having been in town for all of a day and a half, and the ones he did not know seemed to know him.  They mostly knew 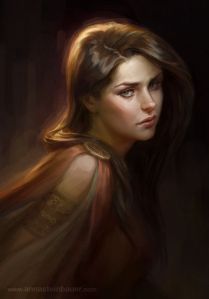 Margueritte as well, but in part her embarrassment came from being called such a sweet girl and, “My how you’ve grown,” and “You’re quite the young lady now.”  She knew she was only fifteen, but they did not have to treat her that way.  When she had just about had enough, her mother became her refuge and for a minute she wished she was back at the inn with Elsbeth and Squire Tomberlain.

Roland, for all his desire to be with her, kept so easily being dragged away by the men.  She told him, at last, to go and enjoy, and he did until the time came and the chamberlain called for quiet.  Roland stood beside Margueritte when the people attended the king.  The king sat in his place on the dais, and the queen beside him, but a bit further away and a bit lower than before.  Finnian filled the gap to the king’s left, and at the moment, he looked around the room with his hardest stare in case anyone should be tempted to smile in his direction.  Duredain stood to the king’s right, and he leaned over to whisper and the king then remembered.

“Gentlemen,” the king said.  “My lords.”  He paused.  “And ladies.”  He added.  “I have received correspondence from Charles, Aid decamp of the Franks.  He has suggested that Lord Ahlmored may pose a threat to our fair country.”  The king laughed and most of the Breton lords laughed with him.  Ahlmored, most not knowing him dead, had become the butt of quite a few jokes since his sudden departure.  The king waved for silence.  “Nevertheless, Lord Durin has volunteered to take a ride to the south coast a week hence.  When he returns, having sighted no African sails, I will return correspondence that we have indeed had our eyes on the coast.”  Most of the Lords snickered again as Lord Durin stepped briefly into the center and waved to all.

Duredain whispered in the king’s ear and the king waved him off, like he did not need to be reminded.  “Now as for this dragon,” he began, and many in the court smiled but those who knew became still and serious.  “I am not convinced there is such a beast.  I believe rather it is a petty chief or robbers, cleverly disguised.  Dragon stories are all around these days what with Beowulf and the stories around George the Saxon.  I say, we leave the dragon stories to the Danes and Germans.  Let us be more sensible about these matters, and let my petty chieftains settle their own squabbles as they see fit.”

“No, my Lord,” the king countered.  “I am not sure what you saw was really what it was.  I did say, cleverly disguised intentions.  Mark me, someone is growing rich off your delusions.  You must find the real culprit, and not bother me with such nonsense.”

“Enough!”  The king’s rage flared for a moment as he slapped the arms of his chair and rose to his feet.  He calmed and sat.  “I’ll not speak of it anymore, as it will merely distract from the real joy of this day.”  With this, the queen, even in her lowly position, sat up a little straighter in her chair.

“Judon,” the king called.  If someone stood in the wings, they did not respond.  “David!”  The king tried again, and slowly a young boy poked his head around the curtain.  One could almost feel the push his nanny gave him as he stumbled, recovered, and walked slowly like one overawed by the gallant lords and ladies that surrounded him.  At last the king grabbed the boy around the middle and pretended affection.  The boy did not resist, but he never took his eyes off the crowd.  He looked scared, and almost like a child who could cry at any moment, though surely, he was too old for that.

“His mother calls him David,” the king said patently ignoring the queen.  “I objected at first, but I understand this David was a great king in his day, and a valiant warrior.  His name, though, is Judon and by royal decree three weeks gone, Wednesday, I have declared him my son and heir.”  Many present were not surprised, and of those who were, most were accepting.  A short round of applause went up.  Margueritte thought it very short.