The king spoke again.  “I know he is young, having only turned twelve on the day of his declaration, but he has been given to be page into the hands of our faithful Bedwin.”  Bedwin bowed to his king and prince.  Lady Brianna and Margueritte looked quickly at the knight.  Margueritte could not tell, but Lady Brianna became convinced in her heart that this man belonged to Owien, son of Bedwin.

“Thomas.”  The king called quickly for the bard, mindful of his son’s discomfort, though not looking very happy about it.  “Tell us a tale of kings of old.”  And Thomas did in story and song.

He told the story of mighty King Bodanagus and his great love, young Esoulde the fair.  In her day, she was said to be the fairest of women, but she loved her king, and he loved her as men and women rarely do.  All this happened ages and ages ago, when the kings and great Lords of Gaul fought forever amongst themselves like dogs fighting over a bone.  They never had peace in those days, and the people suffered in grief for their fathers, husbands, brothers and sons taken by war, and great was the poverty and oppression that ruled over them.  Still the great lords and kings fought in Gaul and king Bodanagus among the mighty.  He won great honor and glory in battle, but never did he see the agony of the people. 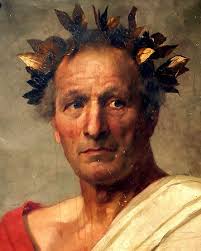 Finally, in Bodanagus’ day, the people could fight no longer.  Their spirits had fallen to the lowest, and there was no more strength in their bones.  It was then, by the three fingers of fate, that a man came from the south like an all-consuming fire, like the whirlwind.  It was the man named Julius Caesar.  None could withstand him and the power of Rome.  Those who took up arms against him were quickly put to the sword, and in almost no time all the Lords and kings of Gaul bowed knee to Caesar.  All, that is, but the Lord of the Nervii, King Bodanagus, the mighty.  He had never bowed knee to man nor beast, and he vowed himself to fight this Caesar and win great glory in battle.

When the two worthies met, they fought for three days and three nights without stop, first one giving way, and then the other.  At last, exhausted, they agreed to a truce of one month to rest and tend their wounds.  Never before had Caesar faced such a mighty foe as the king of the Nervii.  The outcome of it all remained uncertain.  But even as the truce began, fate intervened once again, for fate had decreed the victory for Caesar and became angry at the valor and might of the

king.  Under the dark cover of the new moon, the arrow of fate struck and Esoulde the young and fair fell, declaring her love for her king with her last breath.  All at once, mighty King Bodanagus, warrior without equal, saw the world as if for the first time.  He wandered from the battlefield, saw the misery of the people, and his heart went out to them in his grief.  He took all the treasure, both his and his forefathers and placed it around Esoulde, that she might forever be covered in gold. And he built a mound around her and so cleverly disguised it, that to this day, though it contains treasure more than a thousand kings could bear, no one has ever found the place.  They say, though, it lays somewhere near the place where I was born, which is why this tale is so near to my heart.

It was in the darkest part of the night, right before dawn, when mighty King Bodanagus came to the tent of Caesar.  They say he asked only for peace, that his people be secure in their homes and have a chance to prosper without fear of threat from Rome or their neighbors, and in return he granted to Caesar all of Gaul, Albion to the Firth of Fourth and the coast of Iberia, even inland to a certain degree.  Caesar agreed, and Bodanagus released his army and turned the crown to his beloved brother.  Then he wandered through the world.

That he went to Rome we know for certain.  It is well known that it was Bodanagus who tutored the young Octavian in the ways of men and kings.  Octavian was the one who followed after Caesar and was called Augustus.  Some say King Bodanagus wandered all the way to Egypt where he refused to place the crown on Cleopatra’s head and prophesied only doom for Egypt and the Egyptians under the queen.  Much is uncertain, but in his day, it is known that he did many mighty deeds and saw many wonders.  It is also known that under the new moon, he never failed to shed some tears for Esoulde, the fair and young.

Margueritte fell to tears.  The story made her ever so uneasy, but the tears she could not help.  Her father’s words did not help, either.

“Cheeky man,” Lord Bartholomew said.  “Giving away Gaul and Albion and Iberia as well, as if they were his to give.”

“Oh hush,” Lady Brianna said.  “That was always one of my favorite stories.”

“For the young Lady.”  A servant came and held out a cup to Margueritte.  “Soft cider.”  The servant assured Lady Brianna, and Margueritte decided she was indeed thirsty after her cry.  She drained the cup, and then turned her attention to the festivities because Thomas had finished, and the torches were being extinguished.  The great double doors at the side of the courtroom were flung open and the king’s great fire could be seen ready to burn.  The king lit it by his own hand, and then Duredain began the interminable ceremony which included several sacrifices like two young rabbits thrown into the open flames.

Margueritte put her head down.  She could not watch.  Besides, her head felt a little like it was spinning.  She did not feel quite right.  Suddenly, she felt a strong hand guiding her away from the light and she thought it was Roland.  She felt grateful because she felt like she might get sick.  They went outside, and she got lifted into a cart.  Then she did get sick.  Then she passed out.

A bit of the story of Bodanagus before Margueritte wakes up in a tower not even knowing her own name.  Until Monday (and Tuesday and Wednesday, as always) Happy Reading.