Chief Brian took a deep breath.  “Please understand.  I love our people and I expect the witch’s plans will not be in their best interest.  I assume, though I may be wrong, that you may have the power to undo her wicked scheme, whatever it may actually be.”

Margueritte paused once more to consider.  “But how do you know I am not also a witch, maybe worse than the other?” she asked.  Brian looked at her again, briefly before he looked away once more.  He seemed to laugh.

“Because I have seen you and know you, and your mother and family as well.  If there is anything in you, it is purity, not wickedness.  You have the Christ in you.  And you have shown no signs of wanting to take over anything or bend anything to your nefarious will.  Why, you are no more witch than I am.”

“But what of the king’s left ear?  Surely, he has some sense there,” Margueritte said, but Brian sighed.

“Alas, his left ear is occupied by Finnian McVey, and that Irishman is only in it for himself.  Lord knows his agenda, except he is nobody’s fool, not even for the witch. But you see, now, whether the king turns to the left or to the right it will not go well for us, not well at all.”

Margueritte had a lot to think about, though she was not sure there was anything she could do.  She hardly had time to think, though, because as she stood to walk, she found herself cornered by Finnian McVey himself. 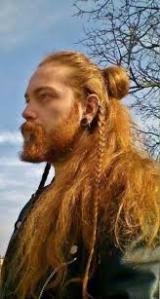 “Young Margueritte,” he said and turned up his thin lips in what Margueritte imagined he supposed was a friendly smile.  “A weard, if you would be so kind.”

“Of course,” Margueritte said, curious enough after what the village chief just told her.

“Over here, if you don’t mind,” he said and took her by the elbow and lead her to the edge of the woods.  “What I have to ask is delicate and I would not have untoward ears listening in.

Margueritte extracted her arm before she was pushed into the actual woods, but she found herself well within the shade of the trees and her back to one great tree, while Finnian blocked her way back into the light.  “I am sure there is nothing I might tell you which is worth such secrecy,” she said.

“Ah, but there is.”  He pressed his hands together and put his fingers to his lips as if deciding exactly how to phrase things.  He stepped closer, and she took a small step back, and so he moved her more surely into the shadows.

“I have it on authority that around your home there are certain powers in the world and spirits of the darkness.”

“Then your authority is wrong.”  Margueritte said quickly even as she wondered who else knew the supposed secret.  “For I would entertain no darkness around my house, and neither would my mother nor my father who is Count of the Frankish Mark, lest you have forgotten.”

“Light and dark,” Finnian said with a step to force her back.  “These are relative terms.  They say there is a god, Abraxas, who bears the burden for both.  Of that, I would not know, but of the cratures that surround you, I am certain,” he drawled.

“Sir,” Margueritte said.  “I must return to the grounds before the others miss me.”  She was not really with others apart from Roland, Tomberlain, Owien and her father, and they were engaged in the games, though Finnian did not need to know that.  She started to walk, but he put out his arm and stopped her steps.

“Not yet,” he said.  “For I also know these powers worship the ground you walk on and will do whatever you ask.”

“Sir.  Even if that were true, it would be in the asking,” Margueritte said.  “Your spirit belongs to you and for that only you are accountable.  Would it be any different with any other spirit?  I think not.  Whatever you have heard, each one belongs to him or herself, not to me.”

“Ah, but if you were to ask, you could give one to me and then I could see what is what,” he said, and Margueritte took two steps back on that note.

“I am not one to endorse slavery, especially to the likes of you.”

His hand came very close to her face, but he withheld his slap.  “I am not asking you, missy,” he said instead.  “I am telling you to give me one of the little people, one with power in this earth, and you will, soon, if you know what is good for you.”

“Never.”  Margueritte charged toward her freedom, but Finnian caught her and dragged her deeper into the woods.  Her eyes yelled for help, but her mouth got covered by his hand.  She dreaded the taste but bit him all the same.  He yelped and she got out one “Help!” before he hit her, hard.  The smile appeared long gone from Finnian’s face as his thin lips turned down in a growl.

Finnian let go suddenly when a little one ran up his back.  He giggled, even as he caught something out of the corner of his eye.  He spun round and round and tried to get a good look, but the fee moved too fast and stayed always just in his peripheral vision.  When he fell over from dizziness, an impish lady gave him a wet, slobbering kiss right before the two below pulled on the string that held up his pants.  He fell, face down into the puddle of mud, not there a minute ago.  Finnian got up, angry, but his pants stayed around his ankles and there came a great roar, like a lion got right behind him, though it came thundering out of the littlest dwarfish creature.  Finnian screamed for his life and ran.  He tripped several times because of his pants as he ran back to the ground of the games.  Margueritte fell-down, laughing.