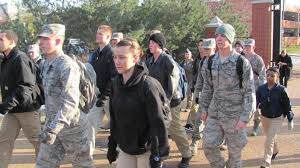 Thursday afternoon ROTC had time on the firing range in town. Normally ROTC consisted of class work in leadership, military operations and tactics, army customs and traditions and a whole section on goal setting. The physical part remained important, but got interspersed, with most of the time spent in the classroom. Captain Driver, however, seemed determined to weed out the weak and hopefully the women as quickly as possible, so he top loaded the class with activities like long hikes, running, drills, and the obstacle course and firing range. It seemed to be working. The boys in the class were down from twenty-one to eighteen.

“You should have become familiar with this weapon over the summer.” Captain Driver paused to look at 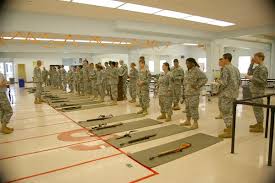 his roster, as if he did not already have a victim in mind. “Miss Hudson, please come up here and show us what you know about the weapon.”

Emily already got up before he spoke. It took her a whole hour over the summer to master the weapon, all the parts, and how to break it down and put it back together. It took some of the others days with the manual in front of their faces. Some never did figure it out. Emily went right into it. She snapped it apart, named every piece, its function and how to clean and care for it, and snapped it back together in short order.

Terrence put his head in his hand and shook his head. Carl stared, open mouthed, but he was getting used to it and did not hesitate to glance at Karyn. Karyn grinned broadly, not the least because Captain Driver picked on Emily instead of her. Karyn could have handled the weapon, but not nearly as well or close to as fast, and she probably would have forgotten some of the parts and other relevant information. Captain Driver actually smiled.

“Knowing the weapon and being able to use it may be two different things. Miss Hudson, if you would not mind continuing the lesson on the range.” It was not a request.

On the range, Emily went through the proper procedure for firing the weapon and for gun safety in general. She might as well have been reading it from the textbook except she showed and did not just tell. When she got ready, Captain Driver handed her a clip with three bullets in it. “Just try to hit the target,” he said.

“Sir, yes sir.” Emily turned and fired three shots with hardly a breath between. Then she stomped her foot and made a face before she returned to an attitude of attention. “Sir, my apologies, sir. Only two hit the bulls-eye.” One hit the edge but it was hardly a miss by much.

Captain Driver stepped up and whispered. “Is there anything you are not good at?”

Then it became everyone’s turn. There were only ten rifles for twenty students and most of the time got spent taking them apart and putting them back together, learning the various parts and practicing gun safety. Not many shots were actually fired that day, nor was that necessarily a bad thing for freshmen.

Emily relaxed and watched most of the time. She helped when she was asked, and that was often enough. The staff might have problems with her, but the company respected her. She spent the rest of her time hanging out at the office. The range manager, a kindly old man, had some interesting stories about the police when they came in, especially the rookies, and some about housewives, particularly those forced to come by their husbands.

The man was telling a particular juicy story about a gentleman who shot himself in both feet when Detective Schromer showed up. The detective had her nose in the air and asked what that foul smell might be.

“I smelled it, too,” Emily said. “But I didn’t think anything of it. I thought it was just the local sewer plant.”

“Hudson!” Terrence called out and Captain Driver came up to the office. Emily came to attention.

“Ma’am.” Captain Driver was respectful to the policewoman who spoke before he could give Emily a different order.

“I need to borrow Emily for a few minutes. Please excuse us.” Lisa grabbed Emily by the elbow and dragged her to the firing range while two things happened. Several people screamed, and the office manager shouted.

“Bill? That can’t be you. We buried you last week.” He stared in horror over Captain Driver’s shoulder and slammed the office door in the captain’s face. Then Lisa said something that frightened Emily half to death before it made her laugh, nervously.