It took a whole week before Margueritte felt well enough to sit on the bench under the old oak.  She loved her visit with Goldenrod, but she hardly got a word in edgewise.  Goldenrod had too much “newsy.”

“And Hammerhead got so ogerish it was scary to be around him, and he broke bunches of stuff,” she said.  “But your mother was very brave, and she and Lady Jennifer, that’s Little White Flower, you know, they convinced him to go home to his family for a while.  And his family moved down to Aquatainey, but Roland says king Eudo thought the Saracens were scary.  I think he was making a ha-ha.  And anyway, Lord Larchmont and Lord Birch and Lord Yellow Leaf, that’s Little White Flower’s father, you know, and my mother, Lady LeFleur kept everyone working really hard at what they were supposed to be doing.  Mother said you would want it that way, and the Lady Danna, too, though everyone wanted to go looking for you.”

“Grimly?”  Margueritte got one-word in.

“Oh, he and Catspaw went to find where Pipes wandered off to, and Catspaw says she wants children.  And Marta is pregnant, now that she is married to Weldig the potter, though how anyone can stay pregnant for so long is a mystery.  She’s been pregnant five whole months now!  Oh, and Luckless and Lolly are talking to each other, now that Lolly says her work here is done, what with Marta being married and all, and they are talking about going to find their own children.  I didn’t know they had children.” 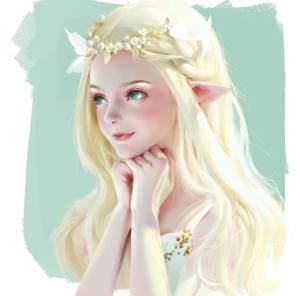 “Oh, and I saw Owien and Elsbeth kissing once, and I laughed and laughed.  It was so funny!  And Maven found a new hidey place for nap time and she says I’m not supposed to tell anyone that it is just past the bushes between the kitchen and the tower, you know, where it is all soft grassy on the hillside.  Oh, and Little White Flower, I mean, Lady Jennifer is beside herself with frets and fusses because Father Stephano has been here three whole weeks and Father Aden has asked her not to get little when Father Stephano is around, but I think she is really in love with Father Aden, you know.  But sometimes he and Father Stephano get really loud, but I think they like each other, so I don’t understand why they get loud unless one of them has some troll or ogre in him.”

“Mother.”  Margueritte looked up and pulled her blanket up a little as well.

Lady Brianna looked down at her daughter and the little fairy perched so sweetly on her daughter’s shoulder.  “You two are a real picture,” she said with her warmest smile.  “But I think maybe Margueritte has had enough for one day.”

“No, Mother, please,” Margueritte said.  “I’m all right, really.  Here.”  And she pushed over a little to give her mother room to sit

Her mother sat, slowly.  “I always loved the fall,” she said.  “But it is rather chilly out.  I think it may snow soon.”

“It may.”  Margueritte shared the blanket.

“You don’t know how wonderful it is to be outside, even if it is chilly,” Margueritte said.  Her

mother looked at her and after a moment, nodded.  “And Goldenrod, even at her most runny-mouth, is the best company a girl ever had.” Margueritte finished her thought.

“I am?”  Goldenrod asked with complete surprise.

“The best,” Margueritte confirmed with a nod.

“Weee!”  Goldenrod took to the air, positively, and literally beaming with delight.  Both Marguerite and Brianna had to smile.  They felt a small touch of that delight as surely as if it was their own.

After a moment, Goldenrod settled down, and Lady Brianna looked seriously at her daughter.  “I need to speak with you about Jennifer,” she said.  She paused only for a moment as if searching for just the right words.  “She told me the spirits and people are not supposed to mingle.”

“It isn’t encouraged,” Margueritte said.  “Imagine the trouble that could cause.”

“Yes.”    Lady Brianna nodded, grimly.  “I can testify to that by personal experience over these last several years,” she said.  “But there are exceptions.”  She was suggesting something.  Margueritte got curious.  “Say, in the case of true love?”

“Oh?”  Margueritte felt suspicious, but Goldenrod voiced the suspicion before Margueritte could ask.

“Like Lady Jennifer and Father Aden who want to get married,” she blurted it right out.  Lady Brianna looked over to the Chapel.

“Jennifer has grown into a lovely, faithful young woman,” the lady said.  “But I cannot imagine how that might work.”  Fairies tended to live as much as a thousand years, and by comparison, the human lifespan was so terribly short.

“Has anyone talked to her father?”  Margueritte wondered.

Lady Brianna’s eyes lit up, but she said no more about it as she smiled and patted her daughter’s hand and went back inside with one more word.  “Come in soon.”

“I will mother,” Margueritte said and she shrugged off the more disturbing questions by turning back to Goldenrod.  “What other newsy since I’ve been gone?” she asked.

Goldenrod flitted, almost danced in the air like a little porcelain ballerina.  “Lovey, lovey, lovey.”  She stopped still in mid-air.  “No time for newsy.  I have to see if Elsbeth and Owien are getting kissy again.”  And she was gone.

Margueritte got stronger every day, though she remained skinnier than even she wanted to be.  But every day she felt more certain of herself, in her identity, and in her memories, including those memories throughout time that she could reach, and she supposed that was the important thing.

After three days, on an early afternoon very much like the other, Margueritte sat again on the bench under the old oak.  She had her cloak wrapped tight around her, and her blanket tucked in beneath her legs.  She imagined she looked like an invalid, but she felt determined to spend as much time outdoors as she could before the winter made that impossible.

She thought of Roland, of course, and fretted over his going to war.  She felt worried for him, and the thought of Tomberlain with him felt frightening.  She decided not to dwell on that thought.  She just began to wonder for the millionth time if Roland might propose, and imagined what such a life might be like, when she saw Little White Flower, or rather, Lady Jennifer and Father Aden come out from the Chapel.