The afternoon began wonderfully, and full of celebration for the newborn child.  “Every child is like the Christ child,” Father Aden said.  But then there were horses in the fens, and four men came up quickly, followed by a fifth some distance away.

“Duredain, the king’s druid,” Bartholomew breathed.  He did not especially like the man, and neither did the people of the fens, many of whom were there under sentence of the druid acting as magistrate for the king.

“Lord Bartholomew.”  The druid was always polite to the Franks, but it seemed thin.

“Roan and Morgan I know,” Sir Barth said.  They were Brian, the chief of Vergen’s deputies.  “But who is this tall, lean one with you?”

“Finnian McVey.”  The man introduced himself.  “Lately arrived from the Irish shore and welcomed to the hospitality of King Urbon’s court.”

“You will cease and desist this distribution at once, on the king’s orders,” Duredain said, getting right to the heart of the matter.  “These men and women have been put to this hardship under penalty of law.  They are not to be aided in their sentence or comforted for their wrongdoing.”

Sir Barth reached up to rub his chin and think of what to say.  In the interim, Lady Brianna and Aden the Convert both spoke in unison.  “Nonsense!”  Fortunately, before the argument could begin, the fifth rider arrived; Thomas of Evandell, the king’s bard.

“The girls.”  Lady Brianna voiced her first thought, and Father Aden nodded for her sake to indicate that they would be safely escorted home.

“Actually.”  Thomas negated the whole arrangement.  “The king has asked if you would bring the girls, if it is not inconvenient.  He has heard stories and wonders if he may hear more of the truth of the matter.”

Duredain the druid squinted at the girls.  He had not anticipated this, but it did make his job easier.  “Yes,” he said.  “I, too would like to hear about these things.”  He snapped at Roan and Morgan who did not get it at first but realized soon enough that their mounts were required.  They reluctantly got to their feet in the unfriendly crowd.  Sir Barth got up on one horse and took Elsbeth in his lap.  Margueritte got up behind her mother on the other horse and held on tight around her middle.  As they left the fens, she saw Aden the Convert try to turn the men to their drink.  The men seemed determined, en-mass, to scare the pants off Roan and Morgan who, after a moment of hesitation, fairly ran for their lives to the sound of much laughter.

“You bet your bippy,” Margueritte said in a language she did not know, and she laughed without having the least idea why she laughed.

In the house with the wooden towers, which was clearly more of a fort than a proper castle, Margueritte looked at everything while Elsbeth ignored it all.  Margueritte saw a great skill in the tapestries and that all the furnishings were well made and well kept.  Elsbeth yawned until they came to the armed guards and entered the courtroom.  The king sat at the end of the room with the queen beside him.  Everyone else stood, except for Brian, the very overweight village chief, who had a little chair off to the side, and Canto, his druid, stood there with him.  Duredain and Thomas went to one knee before rising.  Lord and Lady Bartholomew nodded their heads and simply said, “Your Majesties.”

“I have heard some strange tidings concerning these daughters of yours,” the king said and did not wait for the niceties.  He looked at the girls and Margueritte curtsied and nudged Elsbeth to do the same, which she did after a thought.

“Your majesty,” Margueritte said, as she momentarily looked down to keep her balance.

Margueritte looked at the queen.  She heard so little about her, Margueritte could not even remember the woman’s name, but she looked like a nice older lady, and the queen smiled for her.

“Come.”  The queen spoke up to her husband’s surprise who still scrutinized the girls with his best, practiced glare.  “Come and tell me all about it,” the queen prompted.  Margueritte accepted the invitation, and Elsbeth followed.  When she sat at the queen’s feet, Elsbeth beside her, there arose some consternation in the gallery.  The king said nothing, however, as it was apparently what the queen intended.  The gallery became mollified and snickered a little when Elsbeth’s seven-year-old finger went to her nose.

“Well, it all started…” Margueritte began her story, and she told it almost word for word, exactly as she told her parents.  She stuck strictly to the truth as well as she remembered it.  The queen asked very few questions and the king asked none and only spoke at the beginning when the queen lit up at the word dance and said how she, too, loved to dance.

“You have the Maying, woman.  And that is enough dance for the year,” the king said.

When Margueritte finished, she felt satisfied that the real story had gotten out in spite of Elsbeth’s interruptions and embellishments.  And when the king and queen were silent, the king opened the floor to questions from the court.

Duredain the druid became one of the first to step up.  “You say you slapped this ogre, this very force of nature itself, and he crashed against the wall and fell unconscious?”

“And how is it that you, a little girl, were able to do this?” he asked with a smirk.

“I do not know sir,” Margueritte said honestly.  “Unless it was by the grace of God.”  She swallowed and added, “I am a Christian, you know.”  She looked to her mother and saw pride in her mother’s eyes.  Margueritte was not completely unaware of the political implications in her statement.  The queen appeared unmoved by the revelation, but the king sat straight up, and the druid huffed and puffed, but said no more at that time.  Instead he chose to stand warily beside his king.

“And how is it that lightning came from your fingers to strike the imp?”  A woman asked. 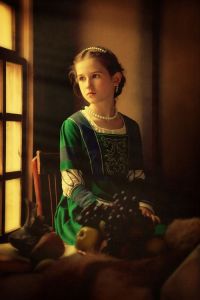 “I do not know,” Margueritte said.

“And there are no imps handy to show you.”  A man back in the crowd muttered and several of the courtiers laughed.

Far and away, most of the questions were about the unicorn.  Elsbeth could not say enough in praise and told over and over how she was healed of all her fears and torments simply by touching the beauty.  Marguerite, however, did not like the tone of some of the questions.  These were asked mostly by men at arms, hunters all.

At the last, the Lord Ahlmored stepped forward as if he had waited patiently for just the right moment.  “Well I, for one, do not believe a word of it.  Oh, I am sure the young ladies have told what they believe is true, but I suspect the truth is more that some ordinary thieves stole the girl in the woods when they had a chance, no doubt to hold her for ransom.  The lovely Margueritte followed her little sister and probably found a gentle old nag that had come loose of its tether and wandered off in search of a good graze.  Then by mere chance they stumbled on the cave of the thieves, sheep rustlers we might call them.  The leader probably slipped in the doorway to allow the girls to escape, which happens.” Lord Ahlmored shrugged.  “The nag, which was certainly lost and had nowhere else to go, then carried them off before the other thieves could stop them.  I suspect there is no more to the real truth than that.”  He shrugged again like that should be the end of the story and the discussion.  Reason prevailed.

Lord Bartholomew, however, had not been counted on.  Red with fury, he broke Brianna’s hold on him.  “Are you calling my daughters liars?”  He shouted and faced the African who merely smiled and bowed.

“Not at all,” Ahlmored said.  “I did say they honestly believe their own story, but you know how these things get built up in the mind, and especially in the imagination of children.”

Bartholomew only kept back when Baron Bernard and Bernard’s squire, his own son Michael stepped in front of him.  Sir Barth felt steaming mad, but he was not the only one.  Duredain the druid looked ready to spit.  Ogres and unicorns made sense in his world, even if they were encountered by one who had the audacity to speak of this Christ.  Arrogant Moslem ambassadors and their rationalistic “explain-it-away” sentiments, however, were intolerable.  For all his faults, the druid could never tolerate a closed mind.

“You’re a fool, Ahlmored,” he said, as Bartholomew looked at his girls.