“Mmm.”  Gerraint nodded before Luckless said too much about the Lady’s virtues to trigger a jealous spell in Lolly.  “We don’t know what we will find on the other side.  This whole thing smells of intrigue and powers at work.”

“Yes, I heard that Abraxas fellow has been poking around this area.”  Luckless pulled his beard.  “I hope we don’t have to tangle with him again.”

“I think Talesin may be tangled up here as well.”  Gerraint finally admitted what he felt way back in Arthur’s court when those ghostly hands carried the ghostly cauldron across the room.

“That breed child of the Danna-Fee has been no end of trouble.”  Luckless shook his head to give Gerraint all his sympathy.

“Yes, you would think after four thousand years he would grow out of that teenage rebellious stage,” Gerraint said.  “But the point is, I don’t know what we will find in Tara when we arrive, or on Avalon of the Apples if we must go there.  Your job is to stay with the Lady, no matter what, and be sure no harm comes to her.”

“Yes.”  Luckless thought about it.  “I see what you mean by hard duty.” 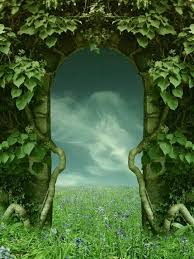 Luckless nodded and they were introduced and paired up, ready at last for the journey.

“Bear to the left,” Macreedy said at the stone of starting, and they began the seven-fold path to the top.

The morning began spring beautiful, but after the first turn, it felt like they walked into an oven.  Everyone began to sweat, except the elf maidens, and the people began to think that perhaps they should have packed less thoroughly.  They told a few jokes about what they did not need to bring, but no one complained, yet.

After the second turn, the wind picked up.  Not far along, the dust began to blow up in their faces.

“Yes, you would think after all the rain we had it would be too muddy to blow dust,” Mesalwig responded.

“Ours is not to reason why,” Lancelot started again.

“Knock it off,” Gerraint interrupted.

“Ooo, the bugs!”  Gwynyvar objected for everyone.  As they made the third turn, the bugs came with the dust and heat.  They flew up in their faces, like the people were race cars and the bugs were trying to splatter against the windshields, though they had no windshields.

“What do you mean you have a recipe for spite bugs?”  Everyone heard Trevor’s objection, and it did sound rather awful.  Everyone tried to keep their mouths closed, and as far as possible, their eyes as well.  Some of the flies were rather large, and some were rather bloody when they splattered against the arms and legs.

“Now, it is a pleasant journey,” Peredur said, held tight to his elf maiden, and smiled as much as he could.  No one could tell if he was serious or not, so no one responded.

“I must say, this never happened when we were working on the fort,” Mesalwig added, but by then they reached the fourth turn.

They all heard a loud crack of thunder. No one saw the lightning, but at once the sky opened up in torrents of rain.  The sky had been virtually clear of clouds only moments earlier.  No one could see but a few feet ahead, and they had to shout to be heard above the crash of the water.

Macreedy tried to pick up the pace as much as possible, but they were slow going against the squall.

“At least it might lessen the damn heat,” Lancelot yelled.

“God willing.”  Gwillim puffed a little from the climb.

They began to feel the water at their feet.  It cascaded down the path, and the water started rising.  “It will only get worse if we don’t hurry,” Macreedy spoke at last.

It got ankle deep at the half-way point, and at their knees by the time they neared the turn.  No flash flood ever bore such strength as it seemed to want to push them from the path and keep them from completing the journey.

“Ah!”  Gwynyvar shrieked and would have been washed away if Luckless had not held tight to her hand.  Lancelot grabbed her other hand, and they pulled her ahead, and lifted her at the last and pushed through the water by sheer determination.  Neither the elf maidens nor Luckless let go that whole time.  They did not seem as effected by the flood as the others.  Then they rounded turn five, and the rain stopped as suddenly as it started.

“Beware the quick mud,” Macreedy warned.  “Once it grips you, it won’t let go as easily as quicksand.”

Everyone paused.  Without a word, they all felt it prudent to let Gerraint, Arthur and Macreedy pick out the safe way, and they followed in their steps.  Without the heat, the dust, the bugs and the rain, this leg did not seem so bad, provided they were careful.  The elf maidens guided their charges well, and only Trevor became temporarily stuck when his foot slipped on a wet rock and landed in the mud.

“Help.”  He yelled briefly before he thought to pull his foot from his boot.  They watched the boot get sucked under in only a few seconds and it made all sorts of disgusting gurgling sounds in the process.

They were nearing the top when they made turn six.  It looked from the turn like a pleasant walk.  They even found some trees at this level, and with the shade they felt that at last the heat might not be too oppressive; but then everything returned with a vengeance—the wind, the dust, the bugs and the rain, and this time the lightning came with it.