After 357 BC, Pella. Kairos lifetime 82: Diogenes: Alexander’s chief of spies.

“Where are we?” Decker asked. “This place looks familiar.”

“It is,” Lincoln answered.  “We came through a gate near this spot roughly eighty or more years ago, into Ophelia’s world.”

“So, we are back in Greece,” Lockhart concluded.  “Somewhere around Olympia.”

“More like around Messenia, I would guess,” Katie suggested.

“The Kairos must be up around Thermopylae, I think.  Maybe Delphi.” Lincoln agreed with a nod.

“Good,” Decker said, and rode out to the wing.

“Maybe this time we will actually find a Nemean lion,” Lockhart suggested, but softly, and with a smile for Katie.

“Ancient history,” she responded in a whisper, as Evan stepped up and offered a thought.

“When we came through here, going the other direction, we came in somewhere around Thrace, and traveled through Macedonia, where we met Diogenes, who gave us some coins for a boat.  We went through Thessaly and exited somewhere off the coast of Thermopylae.  We landed in Diana’s world in the river, if you remember.”

Millie stepped up, Charles Wallace Dodd beside her.  The man appeared to leech himself to Evan and Millie as the only familiar faces in a sea of strangers.  “Of course, at the time, we had no idea who Diogenes was.  He just seemed like a very nice young man.”

“He is,” Alexis spoke up from behind.

Boston put her amulet away, beneath her shirt, and grabbed everyone’s attention.  “We need to go almost straight north, but there is a sea of water in the way.  We will have to swing around by Corinth and go through Bozotia.”

“Boeotia,” Katie corrected.  “By Thebes,” She added for the others.

“Yeah, that place,” Boston agreed, and nudged her horse ahead.

They paused the conversation to watch Boston and Sukki ride out front.  Katie imagined Sukki would mostly walk with the group and let her horse, Freedom, take a turn hauling the little wagon that carried their extra saddles and things. Diana tried for new horses from the future, but the best she could pull back from the future was the wagon.

“It seems a shame to make your horse haul this wagon,” Katie said.  “He was not made to pull the luggage.”

“It isn’t a very big wagon,” Lockhart said.  “And Dog doesn’t mind.”  He put a hand to pat his horse’s neck, and Dog nodded, like he agreed.

“My mother and father,” Elder Stow interrupted and spoke to the leaders of the group, but he mostly spoke to Katie. “You should have my horse.  The father has his own, and you may need to ride to help, or to check our direction, or to safety.  I can float along as I did at the beginning, and if you fear someone may see, I can do so invisibly.”

Katie shook her head.  “We go with what we have.  I can borrow Dog if I have to ride.  You, on the other hand, have learned well how to ride, and no human would ever risk trying to sneak up on us with you on the wing.  Floating risks being seen, and if you were invisible and needed help, how would we ever find you?  You keep to the horse on the wing.  Besides, I would never ride to safety and abandon my friends.”

Elder Stow stiffened a little, but his words were instructive.  “That is why you are a worthy mother of the group.”  He turned and rode out to the wing opposite Decker.  Lockhart and Katie, with the rest of the group, walked. Lockhart figured it would be a long walk to Bozotia, or whatever.

That evening, they asked Wallace why he decided to abandon Diana and follow them back into the future.  Evan said, “I thought you were going to write a paper on the Empire of the Roman Republic, or whatever you titled it.”

“I was,” Wallace said.  “But I abandoned that idea when I realized I had no way to take the papers with me back into the future.  Then, I figure with you folks, at least I had a reasonable chance of getting back to Professor Fleming.”

“We were really innocent, you might say, ignorant traveling through time the way we did,” Evan admitted.  “We are lucky to still be alive, all things considered.”

Millie patted Wallace’s hand like a mother might pat the hand of her child.  “And here I thought you got a lead on Nanette and wanted to follow her.”

Wallace turned red.  “That’s not it.”  He looked away.  “The Nanette we saw in the warehouse was not the real Nanette, I understand.  She must be terribly confused, upset, and afraid, to act the way she did.”

Millie patted again while the rest of the crew sighed or rolled their eyes.  They explained it all to Wallace, that the Nanette that went with them into the past was a duplicate Nanette, created by Athena.  They explained about the good twin and the evil twin that the spiritual world often produced in identical twins, but he could not seem to grasp the concept.  He had a hard-enough time grasping the idea that there were spiritual creatures at all, like Boston being an elf, and he could see that with his own eyes.  The reality of the gods, or that magic really existed in the world were concepts beyond his comprehension.  For a scholar, he had a remarkably closed mind; but then, he admitted as much.

“Truth is, I am not much of a student,” he said.  “Professor Fleming took me on because my family has lots of money.  Our trip to Rome was financed mostly by my mother.”

People nodded that they understood, but the conversation petered out and they went to bed.  They had a long walk ahead of them.

At the end of the week, in the morning, the travelers arrived on a hill overlooking a river.  They had covered about a hundred and fifty miles in that week. The straight line would have been more like a hundred and ten, but they had to circle around through Corinth. 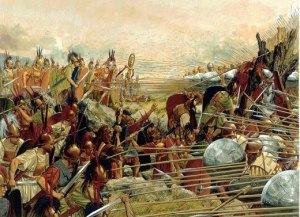 “Besides,” Boston said.  “The Kairos moved twenty or thirty miles down toward us, so that is good.”

The view of the river valley would have been excellent from their height, except there were two armies filling the space, and they seemed to be fighting, or something like fighting.  Long lines of men on foot with big shields and spears appeared to be pushing each other, face to face, and without too many casualties on either side.

“Like American football,” Lockhart said, as he looked through Katie’s binoculars.  Katie got out her scope and attached it to her rifle for a good look. Decker did the same, and handed his binoculars to Lincoln.  Elder Stow had his own goggles which were honestly better than any binoculars. Boston had elf eyes, as good as eagle eyes, but the rest had to make do with whatever they could see at that distance.

“The half near us seems to have pushed back to the left,” Lincoln reported.

“A feint,” Major Decker said.  “See, as soon as the ones retreating got to the higher ground, they turned to fight again.  Meanwhile, the ones on the right now have a big gap in the line.”

“Chaeronea,” Evan shouted.  He figured out what battle they were watching.

“Macedonians on the left,” Katie said. “Athenians pushed forward and Thebans holding their ground on the right.  I see the gap between the Athenian and Theban lines.”

“Here comes the cavalry,” Wallace said, his voice full of excitement.  The others, but for Evan, spoke in calm, measured tones, like people might watch a contest on the television. Major Decker, at least, had been in battle.  Evan and Wallace had no television voices, and neither did Elder Stow.

Theban and Athenian lines to swing around and strike the Theban flank, Elder Stow shouted.

Before anyone could say anything or stop him, Elder Stow fired his weapon from the hilltop.  It struck the Athenian line and exploded the ground beneath their feet, sending men and horses in every direction.

Lockhart yelled, and Elder Stow stopped after the first shot, but a moment later, Katie fired her rifle several times.  Decker saw and joined her in shooting several Athenian cavalrymen.  They stopped firing when the Macedonians moved up and reconnected with the small group of Macedonians that had been cut off and surrounded.

Lockhart yelled again.  “What happened to not interfering?  These weapons are supposed to be for defense, only. We defend ourselves when our live are in danger, but otherwise, we are not supposed to interfere with the normal course of events.”

“Sorry,” Decker said, and it almost sounded like an apology.

“But that was Phillip, I am sure of it,” Katie said, in self-defense.  “He isn’t supposed to die yet.”

“Not your decision, Lockhart said. 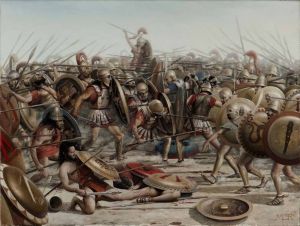 “Lincoln spoke into the tension in the air.  “The Athenian line is broken.  Those men are going to be slaughtered.  I can’t look.”

“I didn’t look in the first place,” Alexis said.  She sat with her back to the whole thing.

“The Theban line is curling up,” Decker reported, having moved on from the liberties he took.  “You say that slick move of cavalry through the gap made in the line was Alexander the Great’s idea.”