In the morning, Chris and Lilly heard a knock on the door.  Mary came in, a look of concern on her face.  “I was worried about Lilly.  She struggled yesterday.”

Chris nodded.  They had kept Lilly entertained, and happy during the season so far, but both Mary and Chris knew how poorly she seemed, even if Lilly never complained.

“This will be a good day,” Chris said, trying to sound positive, though he feared it would not be his best day what with DSS and the court hovering over his shoulder.

“We are going to get a real Christmas tree,” Lilly said, in her excited voice.

“I have the weekend off,” Mary responded with a big smile, it being Saturday.  She looked at Chris.  “Maybe I could help.”  She made it a statement, but really asked if she could come.

Chris did not hesitate to nod his agreement.  “I could use the help,” he said.  And with that settled, they climbed into Chris’ pickup and went out in search of a real tree.

They drove to several places, Lilly in her car seat in the back, looking out the back window at the Christmas on the street, and Mary sitting close beside Chris, grinning the whole time.  Chris wondered what might be wrong with the girl.  She was what, twenty-one?  Perhaps not even that.  He was turning thirty, practically a father figure.  Why was the girl grinning?

They stopped at several places, but none of the trees seemed quite right. Finally, they got to the supermarket lot, and Chris excused himself to pick-up milk, bread and a few things for home.

When Chris left, Mary turned to Lilly and asked why she had such trouble picking out a tree.  The balsam fir has such a great scent.  “It smells like Christmas,” Mary said.

“I just can’t picture it,” Lilly said, looking at a blue spruce.  “I like this one.  This tree looks nice, but how will it look when it is decorated?”

Mary nodded, like she understood something.  “I think we can give some substance to what we visualize,” she said, but Lilly looked like she did not understand.  Mary found a little stick.  “Pretend you are a Christmas fairy, and this is your magic wand. Point your wand at the tree…yes, like that.”  Mary stood behind Lilly and laid her hands gently on Lilly’s shoulders.  Something sparkled, silver and gold in her touch. “Picture in your mind the way you want the tree to look, and wave your wand to make it happen.”

Something happened.  The silver and gold sparkles went out from the stick and covered the tree.  The tree lit up with lights. It had garland, ornaments, and tinsel all over it, and Lilly gasped, a delighted sound.

“I did it.  It’s beautiful.” Lilly squeaked her words.

“Hey. Save the decoration for home.” The man in the lot yelled and came running up as Lilly collapsed.  The decorations and lights returned to silver and gold sparkles and fell to the ground, like bits of ash after the fireworks.

“Lilly,” Mary caught her and held her head up.  To his credit, the man turned from the tree to concern about the little girl. Lilly turned pale, ashen white, and her skin felt clammy.

“I want that one,” she breathed, but did not have the strength to lift her hand and point.

Mary nodded for the man.  He picked up the tree and set it in the pickup, while Mary scooped up Lilly and opened the door to get her in her seat.  Chris came out and pulled out his keys.  He stared at his keys for a second.  He thought he locked the truck.  He overpaid the Christmas tree man and hustled.  He got out his phone, but Mary snatched it out of his hand. She dialed the doctor, and held it up for Chris to talk while he focused on his driving.

The nurse saw Lilly first.  She weighed her and measured her while she spoke.  “How old is Lilly, now?  Five?”

“Oh.” The nurse seemed surprised. “Developmentally, she is on the chart for a four-year-old.”

“She behaves like she is four often enough,” Chris admitted with a face that could not decide between a frown and a smile.  Lilly tried to smile, and they sat in the examining room for a long time, waiting for the doctor.

An hour later, the doctor strongly recommended Chris take Lilly to the hospital.  The doctor wanted to keep her for a couple of days of observation, and run an MRI on Monday.

“I can’t do that,” Chris replied.  “I just lost my insurance yesterday, but I could not afford the deductible anyway. Besides, you already ran two MRIs in the last four years.  I don’t see how that is going to drastically change.  You said you don’t know what is wrong with her…”  Chris let his voice trail off.  Probably not a smart thing to say to a know-it-all doctor.  The doctor looked like he had to control his response. 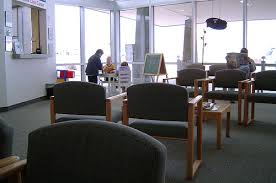 “I could send the ambulance and fetch her.”

Chris shook his head.  “Nothing is going to happen in the hospital on Sunday.  Let me keep her this weekend.  I’ll bring her in Monday morning, and we can talk about it.”

The doctor said nothing.  He left the room with a look of frustration and anger.  Chris did not blame him.  Maybe Chris did not feel angry, but he certainly felt frustrated, not knowing what he could do to help Lilly.  Lilly’s condition seemed to have all the doctors stumped.  Lilly felt a bit better by then.  Her condition appeared to get better or worse without reason.  Chris dropped a hand to her shoulder, and Lilly held the hand with both of hers, looked up at him, and tried to smile again.

Chris and Lilly went out to the waiting room and saw that Mary had been crying. Chris felt shocked.  Mary always had a smile.  He felt an urge to hold her and comfort her, but stopped himself.  How could he hug this young woman without suggesting something he did not mean to suggest?  Lilly, of course, did not break her stride.  She threw her arms around Mary, and Chris decided he could add his arms around the two of them, briefly.

“I am sure you will, little one,” Mary whispered in Lilly’s ear. Then she wiped her eyes and they drove home.  Mary let them go, and went into her own rooms where she wept.  Then she opened her window, as the twilight came, and she spoke softly into the air.

“It is as we feared.  She is dying, being smothered by her humanity.  It is not her natural state, I am sure.  We must rescue her.  Come quick.

Mary left the window open to let in the cold and snowy air.  She stepped into her kitchen and thought something for supper might hit the spot.