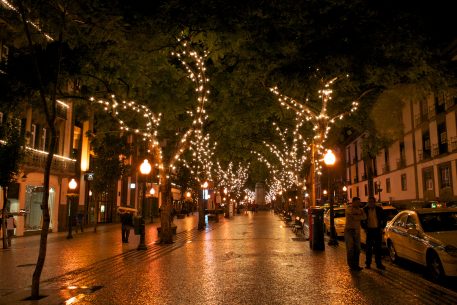 Chris picked up his phone.  Mary sent him a text.  Mary lived in the apartment across the hall from his own apartment.  She became his semi-permanent babysitter over the last six months, since his mother got so sick.  Mary picked up Lilly from first grade, and they were presently in a department store downtown, looking for a Christmas present for him, so don’t hurry. Chris smiled.  He hurried, though he figured in his small Midwestern city, nothing could be that far away.

Mary seemed a godsend.  She appeared to be young.  He guessed she attended some local college, and maybe mostly took classes on-line. That, or she recently graduated and was filling the gap between graduation and a good job.  She always seemed to be available when he needed her, but he never would have noticed her if he had not broken up with his fiancé, Courtney, some six months ago; about the time his mother went into hospice.

Lilly, who he had mostly taken care of over those last couple of years when his mother got so sick, had come to live with him by the time Grandma went into hospice. Chris recalled his fights with Courtney were all about Lilly.  He depended a lot on his babysitter, Missus Minelli, at first.  When Lilly finally and permanently moved in with him, Courtney called it the last straw and broke up with him.  Mary moved in that very day.  Lilly seemed immediately drawn to Mary, and Mary volunteered to sit whenever he needed her, and without him even having to ask.  Truth be told, he felt bad about paying her minimum wage, even if he paid her under the table so she got to keep the whole amount.

“Mary.” He saw her right away.  The brisk three-block walk faded as he warmed in the ambient heat of frantic shoppers.  Mary’s smile helped—and Lilly’s hug, when Lilly ran to him.  “And what have you two been up to?” he asked, pretending innocence.

“Buying you a Christmas present, but you are not supposed to know,” Lilly said, as he set her down and took her hand.  “It’s a surprise.”

“A surprise?”  He pretended surprise, while Lilly vigorously nodded her head, before she coughed.  Chris knelt-down to hold her until the coughing fit passed.

“I’m sorry,” Mary said.  “She seems to be struggling today, but I thought a fun outing might do her some good.”

“No, it’s all right,” Chris said.  “It was a good idea.  Lilly always gets sick around Christmas, especially.”

“But maybe an hour and a half since school is enough.”

Chris shook his head, and confessed himself.  “I just got laid off, so Lilly and I will be spending lots of time home in our little apartment this Christmas.”

“I’m sorry to hear that,” Mary said, and barely held her hand back to keep from offering a physical touch to comfort him.  Lilly stopped coughing, but instead of backing out of the hug, she put both arms around Chris and returned the sentiment to him.  Even if she did not entirely understand, she knew being laid off would not be a good thing.

“No, I think maybe it was a gift.  Maybe, if the economy picks up in the new year, I can get a job that actually uses my college degree.  Who knows? I might even find a job I like.”

“It should be one that you love, no?” Mary whispered.

Chris heard, but did not answer.  Instead, he stood, kept hold of Lilly’s hand, and proposed.  “What say we go to Vincinni’s tonight?  What would you like: spaghetti or pizza?”

“And Mary?” Lilly asked with the name, and reached out with her other hand.

“And Mary,” Chris said.  “If she doesn’t have other plans…” he turned to Mary.  “If you would like.”  He did not want Mary to think he was asking her on a date.  He wanted to be sure she knew she could make an honest choice, but Lilly interrupted.

“Mary is family, too,” Lilly said.

“Like family,” Chris admitted, and he thought of Thanksgiving, and that great turkey Mary made.  She called it the first turkey she ever made, but it turned out perfect, so he found the first turkey confession hard to believe.  Still, she asked him, and Lilly to Thanksgiving supper.  She brought everything over to his apartment, turkey and all, since Lilly had a fever that morning, and lay curled up on the couch. Not exactly a date, Chris imagined. Not the same as him asking her out.

Mary looked at Chris with a look that said she would not mind being family; but he did not notice.  They walked, both holding one of Lilly’s hands, and no doubt the people who saw them thought a mom, a dad, and their little girl.

“So, what did you do for an hour and a half?” Chris asked Mary, but Lilly answered.

“We counted the decorations all up and down the street—all the beautiful trees and lights.  And we said Merry Christmas to everyone.  I love Christmas,” Lilly said.  She let out her biggest and best smile, but she felt warm, like she had a little fever even then.

After spaghetti, and lots of love and laughter, they walked home together, since Mary lived just across the hall.  Chris picked up his mail on the way and said good night to Mary, who lingered a bit before she went in to her place.  He carried a tired Lilly inside, after a last look at Mary’s door.

Mary closed the door to her rooms gently. She put her back to the door and found a small tear in her eye.

Chris turned on the light switch, and made sure his Christmas tree got lit. Lilly had always been a sickly child, but she always got worse during the Christmas season.  Curiously, she also drew strength during the season. The lights and treats, the trees and decorations, the hymns and songs of joy, the giving and receiving gifts of love, and wishing absolutely everyone Merry Christmas always lifted her spirit. They did not have much in the way of decorations in their little apartment, but as Chris explained to Mary, he really had a choice of buying decorations or presents, and he imagined Lilly would be better off with presents, even if they were things she needed, like clothes, and not so many things she might want, like toys.

He set the mail on the table and carried Lilly to her room, where he got out her things to dress for the night.  “Now, get ready for bed,” he told her.  “And don’t forget to brush your teeth.”

Lilly nodded, a tired nod, but had a question to ask.  “Uncle Chris, could we get a real tree this year?”

Chris paused.  He had the big box of decorations his parents put on the tree every year, so a real tree would not cost more than the tree itself.  His artificial one turned ten that year and began to show signs of age. “Maybe we can do that,” he said. “But not tonight.  Now, go get ready for bed.”

Lilly did not argue.  She felt tired, and in a way, she felt more than tired just from a long day.  She did not feel well at all, but she did not want her Uncle Chris to worry.

Chris checked the mail, and found a letter from the court.  He felt curious, but paused first to consider how Lilly came to be his sweet responsibility. 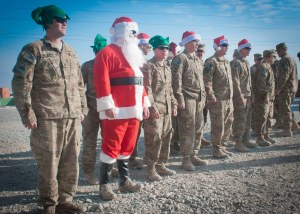 Chris’ brother, Ricky, went into the military, and served overseas in the war. Lilly’s mother, Serissa, who no one ever met, was an American service woman Ricky met at Christmas time.  Those were hard days, as Ricky wrote.  The country they were in did not allow for any Christian celebrations, so Ricky and Serissa had to celebrate on the sly.  Ricky said he lost her after the season, and did not see her again until the following Christmas, when she showed up with a three-month-old baby, Lilly.  Christopher paused in his reflections as Lilly went to brush her teeth,

After that, Serissa became lost in the war zone and was presumed dead.  Curiously, when Chris’ mother checked with the defense department to see if Serissa had family, like Lilly might have other grandparents and such, the Defense Department had no record of her as ever having served, and so they could not give Mom any information—not to say that bloated government agency knew anything.  Mom probably got transferred to the wrong department.  Anyway, Lilly came home with Ricky at one point.  No one could imagine how he worked out the paperwork for that; but then he did another tour and in the end, he came home in a box.  Dad had already passed away from heart trouble, but Mom was still alive back then. She raised Lilly until Lilly nearly turned six.  Chris helped-out as much as he could; but then Mom died suddenly at the age of sixty-three.  At twenty-nine, Chris felt devastated.  He clung to Lilly as much as she clung to him.

He opened the letter from the court.  He read and found some tears.

The court knew he became unemployed, and the Department of Social Services was suing him for custody of Lilly.  Courtney, he thought right away.  She canceled their engagement, because, in her own words, she had no intention of being wet nurse for someone else’s child.  She worked for the company, in the main office, and got him a job there back in the days when they were supposedly in love.  No doubt, she arranged for him to lose his job.  But she made a mistake.  The DSS suit got initiated before he technically got fired; not that the court would care about that technicality.  She probably figured if she waited a week, he might find another job and ruin the whole plan.

“So, what?” he mumbled.  “Does she think she can swoop back into my life once I no longer have a child to care for? Or is this just a vindictive, hateful act?”

Chris stood, wiped his tears, and went to Lilly’s room.  He smiled his best smile, and read her a Christmas story.  She fell asleep before they got half-way through.