“Son,” Bogus began like he had a long speech prepared, but there came shouts and a great commotion among the horsemen in the distance.  The horses at the parley screamed and swords got drawn, and a hundred men broke from the ranks of horsemen and charged.

The dragon turned and slithered up between the two giants.  It rose up and held itself a matching twenty feet from the ground.  The snow and cloud giants looked briefly at the dragon while it looked back and forth between the two, then all three let loose with everything they had in the face of the oncoming charge.

The snow giant shot sharp pointed icicles, like a machine gun.  Those icicle bullets penetrated everything, wood, bronze, iron, leather, horsehide and human flesh.  The cloud giant let loose one lightning strike after another.  The ground, people and horses exploded, and the thunder boomed for miles.  Greta mumbled.

“There was a reason the ancient gods put all the little ones, the sprites in her hands.  They would not give them to another immortal because it would have made that immortal too powerful.”

The dragon, of course spewed flame and created crispy critters, but after only seconds, that whole line of horsemen turned and ran for their lives.  Greta shouted up.

The dragon turned.  “I feel the strong urge to cook you and eat you,” Oren said.

“You are still half mine,” Greta responded.  “You have a powerful half that belongs to the sprites of the earth, and you can resist the control over your human half.”

The dragon turned its head up and shot flame into the sky before it lowered its neck for Greta and Bogus to climb on board. “Hold tight to my scales,” the dragon said.  “You will not hurt me.”  They held tight, and as they rose into the air and circled several times to gain some height, Greta got a good bird’s eye view at what happened down below.

The Scythian horsemen made a massive army. Greta feared for her friends, even if they had two giants protecting them, but then she caught sight of an army coming from the east.  Slavs, she thought, and quickly turned her head to see an army coming from the west. “Goths,” she shouted.  Then she looked once more and saw three horses racing back from the parley, and then she saw no more as they shot out over the trees.

After that, Greta looked side to side, but decided she would rather not look down.  She looked for Mithrasis, and felt surprised the goddess had not already picked them up.  She decided that she guessed correctly.  As long as Mithras and Mithrasis canceled each other out, they were vulnerable to more ordinary things.  Mithrasis probably feared the dragon fire, not to mention the dragon claws and teeth.

Greta finally looked down when she felt the dragon begin to circle for a landing.  She saw the river and had to think about that.  Four thousand years ago the river came down more from the north, above the dome.  Now it had shifted to south of the dome which no longer appeared a dome.  She saw no more than a few dozen blocks of stone, even if they were ten ton blocks, but even they started crumbling under thousands of years of relentless weather.

They landed, a rough landing for Greta and Bogus, though one the dragon probably thought of being as soft as he could make it. Bogus said nothing as he slid to the ground and raced into the gap between the stones.  Greta paused.

“Thank you, Oren.  I hope I live long enough so I can bring your grandmother here for a visit.” She wanted to say she would change the dragon back into a man, but she was not sure how to do that, and besides, the gods never made promises.  Greta learned that four thousand years ago when the dome was whole and the Titan who lived in it still lived.  She could do one thing though, and she leaned over carefully and kissed the dragon on the nose.  A great, hot tear rose in the dragon eye before they both heard something that made Greta jump and made the dragon lift its head.  The distant howl of a Wolv echoed through the trees, and someone started coming through the bushes.  Greta ran through the gap in the stones that let her inside.

Bogus closed his mouth.  He had been yelling at his granddaughters, and mostly Berry whom he knew so well from her years among the little ones of the forest.  But when Greta popped into the room, he quieted and everyone stared for an instant of absolute silence before they shouted and Berry ran into Greta’s arms, tears in her eyes.  Fae followed Berry, and a grinning Hans and Hobknot began to nudge each other, like they had some sort of bet.

Greta took a moment to look around that great round space.  Most of the wall looked one block high, though plenty of places still had part of a second block on top, or two whole blocks which made a wall as tall as Greta. A couple of places were three blocks high where Greta could begin to 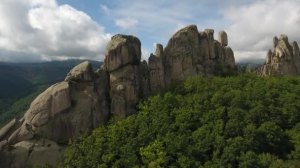 see the slight curve in the stone that once rose up to the top of the dome, but there were not many three block places. There were more blocks and worn down blocks and partially crumbled blocks on the floor of that space, and Greta could see where they were turned into seats and tables for their furniture.

“I never stopped believing,” Berry managed to say before she started to cry again.

“We all kept believing,” Fae said.  “It’s what kept us going on those long winter nights.”

Greta nodded, but she moved Berry into her grandfather’s arms so she could face the old man who sat quietly in the corner. He stood and spoke when Greta’s eyes focused on him.