Hermes grabbed Stinky’s reigns with one hand and Mavis with his other hand and backed them away from that spot.  Nudd awkwardly drew his sword, and no doubt would have foolishly charged the Wolv, but Bogus had the good sense to magically glue the boy’s feet to the ground.  Alesander, Lucius and Briana remembered their shields and drew their guns as the Wolv came bounding out of the trees on all fours.

It paused and sniffed, then it stood on its back legs and pulled its own weapon.  It opened its mouth and began to drool.

“Ready,” Greta said with as calm a voice as she could muster.  “Aim.” She was not especially good in panic situations.  “Fire.”

Briana and Alesander fired together.  Lucius seemed a second slow.  The Wolv returned fire, but one weapon had little effect on the shield wearing humans, while their three weapons together caused the Wolv shield to glow orange, then red, and then with a great crackle, burn out altogether.  The Wolv wrist burned badly, its chest caught fire and one leg looked burned to the bone. With a great howl, the Wolv returned to all fours and bounded back into the woods.

Alesander, Briana, and Vedix, now that he turned around and had others at his back, all started after the Wolv.  They stopped short when Greta screamed, “Stop!  You don’t follow a wounded Wolv into the trees. What, are you crazy?  We need to move on while we can.”  And she started down the side of the ridge into the valley of the winds.  The others followed, but they were not 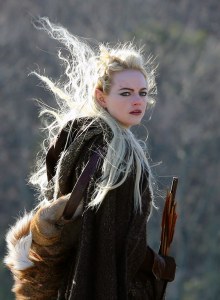 even fully down the hill before they heard great howls, barks, and yip-yips coming from the trees and the wounded Wolv.

“They have our location pinpointed.”  Greta continued to yell, this time against the wind. “They are expecting us to head for the pass.  We are going to have to climb the rumbling ridge and try to get to the ledge.   The only way we will get clear to the north side of the mountains is to go around their traps.”

“I don’t recommend it,” Alesander said.

“It is the only way,” Greta repeated, as she tried to hurry everyone along.

“Oh, I know that.  I just don’t recommend it,” Alesander also repeated himself, as he and Briana stepped to the front to lead the way.

Bogus finished yelling at Nudd.  “You are not supposed to get yourself killed as soon as possible.”  He went out to the wing, in the direction of the pass.  Vedix tended to stay closer to the group and clearly did not like the continuing howls and yips coming from the ridge.

Greta counted it an act of grace and mercy that they reached the boulder-covered ridge on the other side of the valley without incident.  There, they heard a pack of Wolv not far from their heels.

Hermes, Vedix and Mavis all struggled to find footing for the mule and dragged the beast from boulder to boulder.  Briana followed Alesander.  Nudd followed Bogus who kept yelling at him to be careful. Greta found herself behind Lucius, and did her best not to panic when the Wolv reached the spot beneath them.

The climb proved slow and laborious, but fortunately, the Wolv were even more poorly designed to make the climb, and had to move more slowly.  Stones regularly came loose in their hands and by their feet.  The ones above tried not to crush the ones following them, though everyone hoped they might knock a Wolv, even if by accident.

By luck, a little elf magic, and because Stinky decided to be afraid of the Wolv; Hermes, Vedix, Mavis and the mule got to the ledge first.  Alesander and Briana were not far behind.  Bogus and Nudd were slower, even with Bogus helping Nudd in ways Nudd was not aware.  Lucius topped the ridge, but his foot slipped, either by accident or on purpose, and that whole section of the ridge 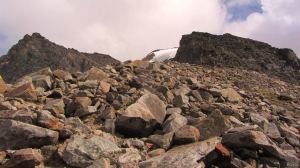 began to avalanche.  Greta screamed, but Nudd reached out and grabbed her hand. He pulled her to the side, to safety, as she watched the avalanche strike the Wolv.  She had not counted them, but she determined at least two had to be as good as dead.

“They are on the ledge, coming from the pass,” Alesander yelled as Greta hauled herself to safety.

“Damn.”  Greta could hear them roaring and coming on fast.  She looked at the others and saw a strange little man gleefully watching the collapse of that portion of the ridge.  She did not hesitate to take advantage of the situation. “Portent.  We need to escape the Wolv.  Quickly, open the way to Movan Mountain.”

The little man gave Greta the strangest look before he offered a bow and waved his hand to the wall of rock.  They found an opening no one noticed before, and the man spoke, “This way.”  The people saw the Wolv climbing again, and heard the others just around a corner on the ledge, so they ran into the dim light of the cave.  One moment they could see well enough to move into the dark, the next minute they heard a slam, like a big, stone door closing, and they stood in absolute darkness.

“Not funny Portent,” Greta said, softly.  “We need some light.”

“Just getting to that,” the word came back, and three torches flared at once.

They found themselves in a big cavern with a vaulted ceiling that rose into the dark, beyond the torchlight.  There were six dwarfs present besides Portent which added up to three males, two females, though the humans could hardly tell the difference, and two children.  Mavis made a fairy light, a floating globe of light which she let rise up above the group to give more general light.  To be fair, only Nudd screamed, and only once, even if a few others clearly looked uncomfortable. 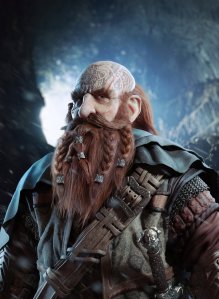 “I was told to fetch you, that you would need our help,” Portent said.  “Though I must say, I have never been asked to help human flesh and mud before.  I suppose the light elf and the other, breed though he be, but mortal humans seems strange.”

“What about the Wolv?” Alesander asked, but Greta hushed him.

“Who told you to help us?” she asked.

“No.”  Portent shook his head.  “Not that woman.  She doesn’t ask.  She has a bad attitude.  No, Mithras himself, stuck as he is in the place of the unknown.”

Greta breathed and Alesander tried again. “What about the Wolv?”

A dwarf woman whispered in Portent’s ear and his eyes got big for a moment as he turned to Briana.  “Well, well. An elect.  I haven’t seen one of your kind since, well, since I’ve never seen an elect before. You are very rare, you know, one-in-a-million.  Some say there are not more than a hundred elect in the whole world.”

Briana spoke with Alesander this time.  “What about the Wolv?”

“Oh, they won’t get in here.  Nasty brutes, those.  Still, I suppose we better get moving on.”  Portent and all the dwarfs with him turned and began to walk away. The others followed, but Nudd had some questions, now that he got reminded of the Wolv, and now that he settled in his mind that these were just little people and not dwarves at all.

“Lady, I don’t understand.  How could animals be smart enough to set traps.”  He evidently heard what she said, but his mind could not process it.

“Because the Wolv are not animals.  They are not wolves like we have in the mountains and the forest.  They are Wolv, a people who just look something like wolves, and they are smart and talk in their own language and they are clever, very clever, and hungry all the time as far as I can tell.”

“Are they like man-wolves?  I heard tell that back in the days when we were hidden from the Dacians and Romans they had a man-wolf near the Bear Clan.  I heard he was a person most of the time, but he became a wolf under the full moon.”

“No, Nudd,” Greta said gently, as they paused to get Stinky through a rough spot in the path.  “Liam was a good man before he caught the wolf disease.  It drove him mad, so he could not help the terrible things he did, but he stayed mostly a man and as you say, he only became the werewolf under the full moon.  These Wolv are Wolv all the time, and they are smart and clever and very capable warriors. This is not a good time for them if they should invade.  I believe the Roman legions and the armies of the Han would give them a good fight. But these are not invaders.  I think these came here by accident and have fallen under the sway of Mithrasis.  Our only real hope is for them to lose the scent.”

Everyone paused as they heard a great boom in the distance.  “Explosives,” Greta said.  “They are trying to blow a hole in your door.”  The sound echoed through the halls, caverns, and tunnels underground. Dust and pebbles fell from overhead.