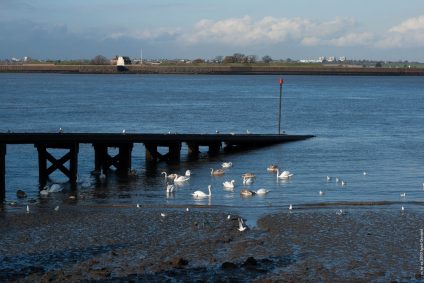 “The river is not yours.  Londugnum is not yours.  Stay off the road to Oxford, and Oxford is not yours.  You can have Kent.  You can be King of Kent for as long as you keep your Angle chiefs in line.  But you and your descendants need to stay in Kent, or I will throw you off my island and drive the lot of you back to the Germanys you came from.”  Arthur spun around and his men followed before Octa could answer.

Arthur packed up his army and left.

They stopped at Londugnum and Arthur spoke with the city elders.  They were British, Angle and Saxon and all of them were relieved to know they no longer owed Octa his tax money.  Arthur collected the money they had thus far raised to pay for damages, he said, but then he declared Londugnum a free city, open to all good and honest folk, and he moved on.

In Oxford, he gave the men still holding the fort an offer.  March back to Kent and vow to never return, and you will live.  They took him up on his offer.  After that, Bedwyr took back his fort and some of the money Arthur collected which he was to use strengthening the position.  Arthur also went home.  So did Gerraint.

Gerraint found Bedivere struggling with his Latin, but working hard.  After only a few days home, he took the young man out into the countryside for a week, and they went fishing.  Bedivere only cried once about not being allowed to go to Oxford.

“Don’t worry son,” Gerraint assured him.  “The way things seem to be going for me in this lifetime, I am sure you will have plenty of adventures.”  Bedivere did not understand or know how to respond to that.

When Gerraint went home to Edith, he found Uwaine had come to visit.  He immediately told Uwaine to take the young man out and show him which end of a sword to hold.  Then he kissed his wife.

Some believe expecting the worst invites it to happen, like a self-fulfilling prophecy.  It is like saying things can’t get any worse, because they always can, and often do as soon as the words are spoken.  They say expecting the worst dooms one to an inevitable fate that lives down to those expectations.  Uwaine said he expected the worst because sometimes he got to be pleasantly surprised. Gerraint preferred a more Boy Scout kind of approach.  He said expecting the worst felt like being prepared.  Young Bedivere was no fun.  He was an optimist. 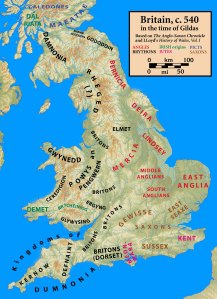 In the winter of 521, as the year wound to a close, the skies remained overcast for days and people prayed for the sun to break through the dreariness.  Gerraint stepped out where the wind blew icy-snow in his face like so many stinging insects, and turned his cheeks and nose red with cold.  He looked to the east where he knew there was great activity and preparations were being made for the great battle.  It felt like the fires of Mordor were lit and come the spring of 522, the flames would burst forth to wreak havoc in the civilized world.

On another day, in another year, Gerraint would have looked north.  That was the direction of Caerleon and Arthur.  A bit to the northwest sat Wales, where independent minded souls lived in seclusion, not being especially neighborly, and many still openly practicing the old ways, sometimes under the nose of the church.  A bit to the northeast sat Leogria and the British Midlands where the people wore their Christianity like a warm coat on a blustery cold day.  The British were inclined to keep the old ways in secret and behind closed doors, like the clothes beneath the coat that were closer to the heart.  Still further north, the land of trouble, where Picts, Scots, Saxons and Danes all coveted the fertile land of Britain.  The British, like the Scottish immigrants, were Christian in name, but the veneer seemed thin and God alone knew what those many people actually believed and practiced.

“Christendom,” Gerraint said to himself.  “But the Anglo-Saxons remain pagan and many are hostile to the faith.”  Gerraint knew those pagans would eventually overrun the land, but not yet.  It couldn’t be yet.  Britain needed another generation, a generation of peace to get the faith deep in the soul of the people.  He feared what the future might look like if Meryddin had his way and Celtic Christianity got wiped out.

Gerraint looked again to the east.  There were fires burning in Wessex, Sussex, Essex, and all the way to East Anglia and the fens of Mercia.  Arthur thought to make Kent a lesson for the Anglo-Saxons, but they took it as a challenge, and now the storm was coming.  Men who were called cowards were now being challenged to prove they were not cowards, and they intended to do that very thing.

Gerraint looked up.  It began to rain.  It felt like an icy rain, but rain all the same.  Gerraint frowned at the sky.  There were not as many people as there should be, no doubt less than when the Romans left. This miniature ice age, with the shortened growing season, and the flu, as he called it, that killed some and never went away, together with the never-ending wars brought the population into real decline.  He looked again at the ground.  What remained of the snow would be slush soon enough, then endless rivers of mud before spring.  Spring would bring the flowers, and it would bring another war, this time, the big one.

Enid called, and his thoughts turned.  She turned thirty-eight, going to be thirty-nine in a couple of months, but she seemed very frisky for such an old woman. Gerraint wondered if she started thinking about trying one more time for a girl.  Gerraint certainly did not mind, and vowed to do whatever it took to make that happen.  He wondered if she might already be pregnant.  He decided that must be so.  He wondered if her woman’s intuition had an inkling of what loomed on the horizon and it told her now or never.  He decided he could not know what she might be thinking, but he knew what he thought. She called again, and he went inside with a grin in his heart.

To Arthur.  The spring arrives with thousands of Angles, Saxons, and Jutes anxious to invade.  There is not much time. The battle they all feared has come.  Until then, Happy Reading.