Enid glanced at the fire before she spoke in a whisper like one afraid she might be overheard.  “It is that Sir Gerraint, the one they call the Lion of Cornwall.  They say he traffics with spirits, fairies, goblins and devils and makes them do his bidding.  They say he can change his appearance, even to appear as a woman, and thus he can learn a man’s deepest secrets, to what purpose I cannot say. They say he is a giant that is best not angered.  And they say he is faithful to Arthur, the Pendragon, but I think he must be like a guard dog in need of a strong chain.”

Her words finally caught up to Gerraint’s brain and he sighed and responded.  “You must not believe everything they say.  The truth is often stranger, but better than you suppose.  Gerraint is a kind and loving man whose heart is as big as the rest of him.  If the little spirits of the earth sometimes are kind to him, it is only because he loves all the world as God made it and he loves all people, even the littlest spirits. And as for him changing his appearance, that is in fact a long and rather sad story that I may tell you one day.” Gerraint sighed and looked again in Enid’s eyes.  Her eyes said she believed him, or at least they said she desperately wanted to believe him.  Then he saw a flash behind those eyes, and she spoke.

“Do they make all men in Cornwall as big as you?” She did not sound bothered by that, just curious.

“Some,” Gerraint hedged.  “A few.  Not all, but some.”  Then he lifted his head and took a whiff of the air.  “It is getting stuffy in here,” he decided

“The Flue,” both shouted.  Both jumped for the handle and they banged their heads and fell to laughing.  Gerraint rubbed his head and thought Enid had the harder skull.  For some reason, he felt he should remember that for the future.

In the morning, Gerraint put on the rusty chain that fell loose to his knees.  He cinched it tighter to his body when he fitted the breastplate.  It proved a bit small, and the back plate would not fit at all, but he really did this for show more than anything else.  He kept his own boots, gloves and gauntlets which were fitted to him, but he took the helmet which fit with a little extra brick banging around the neck.  Last of all, he took the long spear in the corner of the room and made his way downstairs.

When Enid saw him, she put her hands to her mouth and began to cry.  Enid’s mother also cried, and Ynywl took a deep breath.  “May it serve you well,” he said.

“One condition,” Gerraint responded.  “You must come with us to Caerdyf.”  Enid had gotten up early with Uwaine and had all the horses saddled and waiting.  When Ynywl agreed, Gerraint removed his helmet and sat awkwardly at the table. He was never much for eating before a battle.  He was more the kind that ended up starving when the battle was over.

The ride to Caerdyf seemed uneventful.  People stared in disbelief, but no one moved to stop them.  When they came to the city, and Gerraint insisted they approach the fort from the city side, people came out from their homes and work to stare all the harder. Some cheered.  Many followed, so by the time they arrived at the fort, they had a great train of gawkers, watchers and more than one man who fingered a blade or another sharp instrument and stared where the Irish should be.

“What is this?”  A big, gruff looking man came out from the barracks building where he was no doubt ready to enjoy a good lunch.  He indeed looked as big as Gerraint, but a bit older and with a bit of a stomach, no doubt from the lazy life and too much lunch.  The men in the fort had certainly heard the commotion in town and knew what was coming, but the big man, in fact Fenn, played coy.

Gerraint spoke from horseback in clear and calm tones. “Your bitch yesterday suggested you might want to cut my heart out.”  Gerraint understood the score.  Erin had technically married Megalis, but she still slept with Fenn.

Fenn roared with laughter.  “You look like a chicken in that old armor, a right plucked rooster I would say.”

“This is the armor of the great centurion who built this fort to keep out you Irish scum.”  Gerraint raised his voice.  “Every true man of Caerdyf should rise up and throw you and your Irish dogs back into the sea.  You should swim home with your tails between your legs.”  Gerraint pointed his spear at the man’s chest and waited.

“Roman ass.”  Fenn got angry.  “The Romans are all dead.  You look like a dead man wearing that.”  Fenn slammed his fist into the innocent man beside him, the one with his mouth hanging open, and he knocked him to the ground, while he shouted, “My horse.  My spear and shield.  We have a guest who needs a lesson in manners.”

Gerraint inched over to one side of the open court while Uwaine, knowing how this worked, inched over to the other side. Fenn mounted and did not give Uwaine a second glance.  He started toward Gerraint without warning, and Gerraint started, expecting no warning. They crashed in the middle. 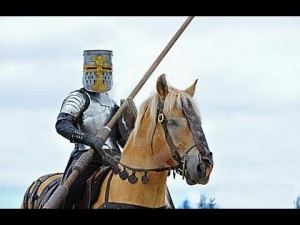 Fenn slowed, but then laughed, thinking he had his opponent.  He turned in time to see Gerraint take his lance from Uwaine and turn for a second run.