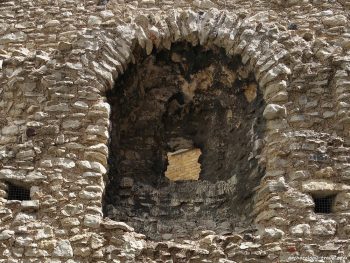 In the morning, the citizens of Londugnum came to Saint Paul’s looking for help.  It seemed the Angles had brought up a large force of men in the night and they camped outside the wall at Ludgate.

“Where are we?”  Pelenor asked by way of reference

“Bishopsgate,” Bishop Dubricius answered.  “We need to go west to talk to the Germans.”

“Eh?”  Meryddin raised his head at the suggestion, and all of the men around the head table that morning paused in their plans.  The men were planning the defense of the city and already planning a counter-attack.

“Bah!”  Badgemagus the Welshman threw his hands at the cleric.  “The only talk Angles understand is spoken by good steel.”

The men went back to their planning and the Bishop slipped out.  The squires had a horse waiting, and he rode west with the boys while the men argued. On arrival, the squires kept back, many climbing the wall for a good look.  Only Arthur, Gerraint and Percival stepped through Ludgate with the Archbishop right behind.  The brave city watch kindly closed the gate behind them, and locked it.  Gerraint waved the white flag, and they stopped short of the Angle camp.  It took no time for four representatives to come out from the other side.  They laughed at the children, and Arthur assumed they would not have come at all, except for the Bishop.

“Holy Father,” the German spoke in accented, but understandable British.  “We have no quarrel with the church.” 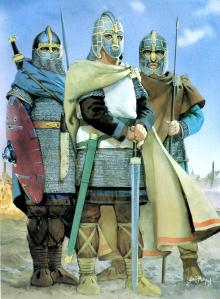 “And should the church have a quarrel with you?” the Bishop asked, while Gerraint stared at this evident leader of the Angles. He appeared a big dirty blond, dirty everywhere, with a few scars and a few teeth.  He wore a bearskin jacket which mostly hid the chain beneath, like a gambler who kept his cards close to his chest.  He carried a sword loosely at his side, Gerraint thought, like a gunslinger in the old west, and no telling what other hardware he might be carrying beneath the bearskin rug.  Gerraint saw the other three men as various degrees of smaller and uglier.  “This has been a city of peace and free trade between the many people who live on these shores,” the Bishop continued.  “Would you see all that destroyed?  Are you declaring war?”

The German stared hard at the Bishop, like he weighed alternatives and thought of many things before he shook his head. “We heard the Britons chose a new leader, a boy, and we thought it would be a good time to demand compensation for the way we have been cheated these past twelve years since Uther.”  The man rubbed his scraggly chin.  If he felt cheated, that only became the catalyst. Mostly, he looked like a man who wanted something for nothing, and thought a boy might be frightened into giving it to him.

“I am Arthur Pendragon, son of Uther,” Arthur said with as much dignity as he could muster.  He pulled Caliburn, slowly and carefully as he spoke.  “And this is the sword that was pulled from the stone signifying my right to speak for the Britons, the Welsh and the Cornish.  If you have a complaint against my people, you can send representatives to argue your case, but for now, this assembly of warriors is unlawful.  I demand you disband your army and leave this gate at once.”

The three ugly men looked surprised by the response and impressed with the sword from the stone, which they knew all about, but the big leader just laughed.  “Boy.  My steel and strong right arm argue my case for me.  We could settle this now, just you and me, but you are such a little thing, I would hate to take advantage of you.”

“I am young, it is true, but I accept the terms. You and I will settle this for all the people, but since you don’t want to take advantage of a young boy, you may fight my champion—the one chosen to fight for me until I come of age.”

Arthur took a step back.  “Okay Diogenes.  Beat him up.”

Gerraint’s jaw dropped.  “What?”  He went speechless.  Arthur looked smug.  “What?” Gerraint said it again, and his blood began to boil in anger.  All the same, he looked for Diogenes, not being able to think of a quick alternative, but when he traded places through time, it was the Nameless god who appeared dressed in the armor of the Kairos, and Nameless had a very big sword at his back, one made for a man.

One of the three uglies shrieked and ran off, screaming.  The other two stepped back, because while they may have been converted to the Christ, like with many of the Britons, the old ways and old beliefs were just a scratch beneath the surface.  Somehow, they knew they were looking into the judgment of Aesgard.  The leader looked uncertain, but he felt committed, and not willing to be thought a coward.  He tried to appear confident, pulled and lifted his sword in preparation for a fight.

Nameless, aware of the political implications of what was happening, made a glamour so anyone looking from the city walls would think he was Arthur and Arthur was Gerraint.  At the same time, he felt Gerraint’s anger at being put in this awkward position, and as the Angle leader lifted his sword, Nameless drew his sword and cut cleanly through the man’s middle, not pausing at bearskin, chain, flesh or bone.  It happened so fast, Percival blinked and missed it.

The German looked down at his middle and laughed, like maybe Nameless missed.  Nameless kicked the German in the chest.  The top half of the man’s body got deposited ten feet away.  The bottom half collapsed where the legs stood.  The other two Angles ran for their lives, and since most of the German warriors in the camp were watching, they also ran.  The little army had gone in less than two minutes. Their tents and equipment, simply abandoned.

Gerraint came back by then and Arthur smiled broadly until Gerraint punched him hard in the face, knocked him down and bloodied his nose.  “They do not belong to you,” Gerraint yelled.  “You swore a blood oath not to speak of them.  You get one warning.  Next time you try something like that I will walk away and you can get yourself killed.”

“Okay.  Sorry.” Arthur held his nose to try and stop the blood.  “I didn’t think.  I didn’t know what else to do.”  All the excuses went unanswered because Gerraint stomped back to the gate and did not listen.  The city watch appeared grateful.  The squires left inside the gate were chanting, “Arthur!  Arthur!” because that was who they thought had done the deed.

Arthur followed, and he went to tears by the time he arrived.  Bishop Dubricius held him and calmly told him there was room in God’s grace for forgiveness, and mercy, and everything would work itself out.  But the worst of it for Arthur came when Percival, who practically worshiped the boy as the ultimate big brother, looked so disappointed, turned his back on his brother, and accused him with two very sharp words.

The men rode up at full gallop, having ridden hard once they realized what the squires were planning.  Meryddin and Pelenor raced from the front.  Pelenor jumped from his horse when he saw Gerraint. He ran up and threw his big arms around him and hugged him with a few tears.  Then he stepped back and boxed his ear.  “Don’t you ever do something crazy like that again,” he yelled.  Then he hugged him again and added softly, “without me.”

Meryddin took Arthur roughly from the hands of the Bishop, but then Peredur fetched his own squire with a possessive look.  Meryddin stayed right there, but did not argue the point.  It took some time after that for the Lords to get the straight story.

As Nameless designed things, Arthur got credited with cutting a man clean in half, and Caliburn looked unused.  Mesalwig, squire to the Welshman Badgemagus and something of an appendage to Loth during the gathering, spoke quietly.  “I said there was some magic in that sword.” Loth simply looked dour.

Kai and Bedwyr lifted Arthur on their shoulders and parade him around, chanting with the squires, and this time with the Lords and city people, “Arthur!  Arthur!” It did not take long, though, before Arthur begged to be put down.  He felt sick to his stomach. 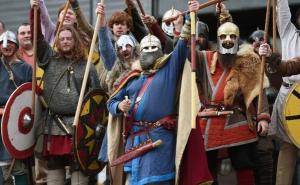 “I would rather ride a plow horse,” he said. Kai laughed and ruffled Arthur’s hair while he called him cousin.  Bedwyr had to think before he understood and laughed as well.  They paraded back to Saint Paul’s, Arthur out front with Meryddin. The people cheered, what there were of people.  The city started dying since the Romans abandoned it.  Gerraint thought it looked like some sections of twenty-first century Detroit, but he said nothing.