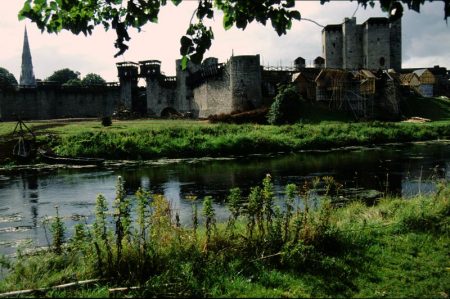 “Moran,” Festuscato spoke to the elf and the elf stood.  “Where is Macreedy?”  He and his Four Horsemen stepped aside to talk behind one of the makeshift barriers in the road.

“He has a thousand elves from the Long Meadow surrounding York.  Bogus the Dwarf has as many covering the roads.  King Wormwood has as many again from Dark-elf-home to cover the night.  And King Larch of the Fee has the Danish shore under observation.

“Trouble?” Constantine stepped up, followed by Hellgard and Ban.  Festuscato took a breath before he nodded and spoke.

“York has fallen to Wanius the Pict.  He has pulled up his four thousand men behind the walls of the town and the fort.  Much of the town and fort have been burned, but it is going to be hard to dig him out of there.  Emet’s family?”  Festuscato asked.  He had a good memory for names.  Moran shook his head.

“But what was this I heard about thousands surrounding the city?” Hellgard had good ears.

“They will hold Wanius in York and keep him from doing further damage to the countryside, this one time.  But when you all arrive, they will disappear.  You will have to face Wanius yourselves.” 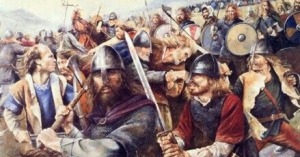 Festuscato quieted them.  The Huns reached the ford.  The British across the way had backed up to hide in the trees.  The Jutes, British, Amoricans and Londoners on this side were hidden and quiet.  Then the Saxons all stood up as one and began shouting insults and screaming and waving their swords and spears as if daring the Huns to cross the water.  The Hun commander wisely got his men down and promptly surrendered as Julius rode up.  The Saxons looked disappointed.  Gregor stepped up and shared a thought.

“A quick surrender is better than spilling more blood, but many of my men don’t think so.”

“Wisdom from a one-eyed Saxon.  Who would have thought to hear it?” Hellgard said.

“Odin has but one eye.  That is good enough for me,” Gregor laughed.

“What is the Danish shore?”  Constantine heard something else.

“The Norwegian shore.  The settlement of yet another new people blown in by the winds of the North Sea. Let us be honest.  Britain north of York had been thinly populated since Roman times.  Too much struggle between Romans and Picts, and now the Scots have not helped. Instead, they have complicated things. They have overrun Guinnon, the fort on the western end of Hadrian’s wall, and they did nothing to stop Wanius from passing over.  You have a good family in Edinburgh on the eastern end, but they cannot hold things alone, and they have been unable to stop the Danes from grabbing chunks of the coast.  You need to drive the Ulsterites out and put someone you can trust in Guinnon to hold the wall.  And I think you need someone in York who can keep out the Picts, Danes and Saxons, no offense Gregor.”

“None taken,” Gregor said.  “I want to keep out the Saxons myself, and I am one of them.”  Even Moran the elf smiled at that one, though for what reason, no one knew.

“We know the Danes well, and find them no friends.  But they can be reasoned with.” Hellgard spoke up.  Festuscato heard, but did not go there.  Julius rode up and Cador and Gildas were with him.

“Gildas. Did you get the chance to kill the bastards?”  Festuscato asked, and immediately regretted it as Gildas quietly nodded.  “Everyone suffers first time,” he added more softly. “It proves you are human.”

Festuscato nodded. “We need horses,” he said.  “We will take some of the Hun’s horses and try to hold on, I guess.”

“About five hundred according to one eye here.”

“Just a guess,” Gregor said with a grin.

“Moran. Please ask Deerrunner if he will accompany Aidan and his Britons in escorting the prisoners to Londinium.” He paused to think.  “We are about sixty miles out which is a good two-day march, or so.”

“Constans,” Constantine called his son.  “Take your men and clean up these grounds.  Give the monks something to do, to perform the burial rites.”

“Julius. You better assign half of your men to help escort the prisoners.  Hopefully, that will be enough to discourage the Huns from attempting anything foolish.”  Festuscato said.

“Dibs and Tiberius can cover that duty.  We will take the better horsemen, about nine hundred.”

“Good.  With us that will make twice the reported Huns.”

“Double that,” Hellgard said, and he sent some men to gather up the horses of the Huns. “And some of my men will take care of their own.”  He sent others to tend the wounded and gather the dead.  Festuscato looked at Gregor.

“My men will gather their own and take them back across the river, but I wouldn’t miss it.” He whistled and took two men aside to instruct.

“I think you and Lord Constantine and King Ban and his men can take some of the horses from Dibs and Tiberius.  That should not change things much and you will have regular saddles to ride.” Festuscato nodded, but it became after lunch before they were ready to ride out.

They covered a good distance before they stopped for the night, but they saw no sign that the Huns slowed their pace.  Festuscato felt a bit afraid that Megla, on finding the gates of Londinium closed to him, might just ride straight on to the next port downriver.  He was sure the Hun had every intention of commandeering whatever ships might be in the dock and escape, and if he escaped unscathed, he might return with ten times the number of men.

The following afternoon, they found the wardens at one of the city gates had opened the gate for the Hun.  Fortunately, Megla did not get far.  The Amoricans that Constans left in the city and the Londoners who knew better had Megla and his men trapped in some buildings down by the river. 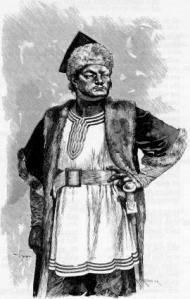 “Megla.” Festuscato called out.  He and Constantine stood just beyond bowshot, the Four Horsemen looking over their shoulders.  “Megla.  Come out and talk.  I have a message for Attila.”  That got him.

“What do you know about Attila.”

“He is getting too much gray in his hair and beard, and making alliances with the Vandals isn’t going to save him.  Come out and talk.”

“You are the dragon?”

“All of Britannia is becoming the dragon.  Come out and talk if you are not afraid.”

“That should rattle him,” Constantine said.

Six men came out of the main building.  They got about half way across the plaza before they pulled out bows and arrows. The bow remaied the basic Hun weapon that they could pull swiftly, even on horseback.  But the Four Horsemen reacted and responded with bows of their own and with enough speed so only one Hun got off an arrow, and it happened only because the Horsemen were busy killing the others.  It was a good shot to Festuscato’s chest, and it would have certainly penetrated any normal armor, but the armor of the Kairos was made by Hephaestos and the dark elves deep under Mount Etna.  The arrow bounced off.

“Megla.  You know it takes more than one stupid arrow to penetrate a dragon’s hide.  Come out and talk, and I will let you live.”

“What good is the promise of a great worm?”

“What choice have you got?  We already stopped your men who were sneaking out to grab a boat.  You are trapped inside, with your horses outside, and soon it will be dark.  The goblins and trolls come out after dark and they tell me Hun is a tasty snack.”

A man appeared at the doorway.  He made a show of putting down his bow and sword as he stepped out on to the plaza. Five more followed him and put down their weapons, while their eyes scanned the surrounding buildings and the roofs around them,

“I am Megla,” an older man said and eyed Festuscato.

Festuscato smiled. “Megla of the Huns, allow me to present Constantine, High Chief and War Chief of Britannia.”

“Attila told me about you, Roman.”

“Then you should know I am willing to be fair.  Tell your men to throw down their weapons and come out.  You will be kept here, in the open until the rest of your surviving men arrive.  Then you will be bound and sent out on the morning tide and returned to Belgium. Your horses and weapons will stay here, but you will have your lives.”

“Thunderfist. Portents.”  An ogre and a hobgoblin appeared.  The hobgoblin bowed.  “Lord.”  The ogre wondered where he was.  “I can let my friends have you after dark,” Festuscato said, knowing that Megla likely saw a goblin and a troll, since he would have no way of knowing the difference. “There are plenty more where they came from.  Go home.” Festusato waved his hand and the two disappeared just as Thunderfist got ready to poke a Hun to see if he was real. “So, what will it be, a small indignity or a hundred years digesting in an ogre’s belly?”

Megla was no fool. He surrendered, and when the rest of his surviving troops showed up a day and a half later, they were all bound and shipped out on the morning tide, at no small cost.  Megla only said one more thing to Festuscato.  It was a question.

“You have a message for Attila?”

Festuscato nodded.  “What goes between him and the Empire is his business, but Britannia is off the menu.  I have been twice kind to the Huns.  Don’t count on a third time.”

Next Monday: R5 Festuscato: The British North.  York is filled with wild Picts.  The town is burned.  The fort is taken.  But the Picts are soon surrounded with an unexpected army of British, Cornish, Welsh, Jutes, and Saxons, all miraculously working together under the dragon, and the first Pendragon…