The Huns arrived about mid-morning the next day, and were wary, but having seen no sign of the enemy other than a couple of scouts that they readily killed, they imagined their ruse worked.  They headed north before they turned west again.  They wanted to give the impression they were headed for Wales, but they cut again to the south when they were well hidden by the trees.  They knew right where the ford was as Festuscato surmised.  They either explored out the river or coerced the locals into revealing the location. In either case, there were men waiting, and Julius moving up from behind.

When the Huns arrived, Hywel perhaps jumped a bit soon.  A thousand arrows blackened the sky, and Huns fell before they backed out of range.  The Hun commander sent men twice to charge the open area that lead to the ford, but the trees around were thick, and they did not get very far.  On the second charge, he sent a hundred men west to try and get on the Celtic flank, but they were cut down quickly.  Pinewood and Deerrunner figured the Huns would try a run around the end, and were prepared, hidden by glamours in the tall grass. Surely the Huns were frustrated, but that condition did not last long.  Julius and his men attacked from behind, and the Huns scattered.  They only had one way left to escape, and that was east, back to where Megla studied the ford.

Megla came to the ford of the ox and the scouts out front found the way blocked.  Megla knew the big and boisterous army of the Celts would still be two days out at their current rate of travel.  He needed to know how many men he faced.  He thought to stay upriver, and follow the water to Londinium without crossing over.  There were swampy areas and other rivers to cross, but none so deep as the Thames.  Unfortunately, that way appeared blocked by the Saxons.  In fact, there were more Saxons in that place than he had seen for quite a number of years.  So he and his men eyed the defenses on the other side of the river and decided in the end the only way across would be a frontal assault.  He would trust his men to get him through, and he imagined once he got to Londinium he might be safe.  There, he could call up the Hun army.  Britain was going to take more effort than he thought, but ten thousand men ought to do it, or twenty thousand if necessary.

Pinewood brought the bad news to Festuscato when he relaxed with Constantine and Ban over a cup of Ale.  Pinewood came in dressed like a hunter, with a green cloak and tall, mud colored leather-looking boots.  He showed the dragon tunic beneath the cloak, so Ban thought nothing of it. Constantine looked twice, but only because the man was not Amorican and he did not recognize him as one of the Romans.

“Megla is preparing to assault Constans at Oxford, probably in the morning.  He is a brave young man, but his thousand will not be able to repel the Huns or prevent their crossing, even with my support.  I recommend you order him to withdraw to the monastery grounds to defend the monks and let Megla pass.  There are enough soldiers left in Londugnum, so with the sailors and ornery humans they should be able to prevent Megla from entering the city.

“We need to get to the horses.”  Festuscato put down his cup.  “Pinewood, tell him to do that very thing.”  He looked at Constantine who nodded.

“Tell him his father orders it.”

“Horses?” Ban asked as Pinewood bowed and stepped from the tent.

“He is a teenager, or near enough,” Festuscato said.

“Since when does a young man do what his father tells him?” Constantine asked, and after a thought, Ban nodded

It became a race through the late afternoon and the night, with the foot soldiers left in the hands of Baldwin of Exeter, Anwyn the Welshman, and Kenan, a British Lord from the Midlands near Caerleon.  They were to come along as fast as they could while the horsemen rode ahead. Constantine had gathered an additional two hundred men on horseback in his travels along the British lowlands between the Thames and the coast, but half of them were on plow horses and mules, so not much good.  They were mostly farmers, with the British Lords in that area, and their families, killed by Megla.  For the Roman influenced Celts, it was not so easy to decide which among the elders should take the leadership position.  Roman-British Celtic leaders were more or less elected, though sons often followed in their father’s footsteps.  The Saxons remained more tribal in nature.  It seemed much easier for the Saxons to choose a new chief, though he sometimes had to fight for the position.  Most of the Saxons who had settled on the southern coastland survived Megla’s cruelty in much better condition.  But then, they were not going to come out and fight for the British lords.

Festuscato knew they were not going to arrive at dawn.  The road alone became enough to make it slow going in certain places. But they would not be too late. He did not worry until Pinewood returned in the dark with another message.  It got his full attention because fairies did not go around much after sundown.

“A thousand Jutes under Hellgard are crossing the river in the dark near the swamps where the river turns, below Megla’s position.  They will be able to come up behind Constans and squeeze him between the Hun and the German.”

Fetuscato called up Constantine and explained.  Constantine looked about to shout, but Festuscato spoke first.  “We don’t know that Hellgard may be friendly at this point.  Megla did not spare the Jutes, Angles and Saxons from his sword.  Like the British who joined us, the German’s may be looking for a little revenge.  Pinewood, set up a delegation to get Hellgard’s attention and ask his intentions. Be prepared to fly and bring Costans back to the monastery grounds, but if he plans to support the British at Oxford, tell Costans and help coordinate the defense.”

“You ask a lot of my people,” Pinewood said.

“No.  I ask too much.  I am sorry.  I have no business asking you to get involved in a transient human event.  But you have the option to say no, honestly, and with no ill effect.”

Pinewood nodded slowly.  “I know this is true, and that is why we will help as much as we can.”

“Fair enough, and thank you.”

Pinewood left, and Constantine had a comment.  “You seem to have a remarkable relationship with the creatures, er, people of legend. How is this so?”

“I was made their god almost five thousand years ago, but that is a very long story,” Festuscato said, and spurred his horse up to the point.

The whole troop walked their horses when the sun began to lighten the horizon. Festuscato, Constantine and King Ban mounted without a word.  Now they had to ride, and the men joined 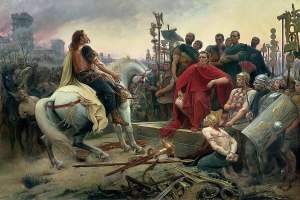 them.  They rode flat out, not caring in that moment if their horses collapsed at the end of the trip.  They had three hundred men to add to the defense, or at least two hundred with the nags and mules trailing behind.

The sun looked fully up when they arrived, and most of the fighting was over.  There were over a thousand Huns taken prisoner, disarmed and on foot.  Hellgard looked covered in blood, but none of it seemed to be his own.  Constans and Vortigen were all but dancing.  Vortigen lost his helmet and Constans had a shallow cut in his arm, but they did not even look tired.

“Youth,” Constantine said as he got down, and Ban nodded in agreement.

Festuscato looked across the ford and saw Aidan the Lord from the British highlands, and Eudof from north Wales, his lieutenant.  They waved.  They hustled down the thousand and some odd foot soldiers, following right behind Megla the whole way, and they fought to prevent Megla from escaping back to the north. He also saw Deerrunner, whose people got there ahead of Julius, and he knew they filled the gap at a crucial point and made Megla’s doom certain.  He returned the wave, but wondered where the Druid Cadwalder was.

Festuscato stepped up to Hellgard when Pinewood arrived dressed as the hunter. Festuscato’s Four Horsemen accompanied him and Constantine.  Festuscato put out his hand and shook Hellgard’s hand before he spoke.

“Lord Agitus,” Hellgard said.  “I have heard about you.”

“Thank you,” Festuscato said, but then he paused to hear what Constans started saying.

“Lord Pinewood told me Hellgard, King of the Jutes was coming to reinforce our position, so we stayed where we were and passed that information down the line.  In the morning, Megla found twice the numbers he expected, and it became a real battle to hold the ford.  The Huns are smart.  They sent some men to test our line first.  When we surprised them, they ran and Megla tried to return to the north. His way got blocked by the British Highlanders, and I think he charged us out of anger and frustration.  Some broke through, and it looked like they might overwhelm our position.  Many of the Huns got down from their horses and they used our own walls against us, but just then, boatloads of Saxons showed up in the river and came ashore behind the Huns.  That was when the Huns began to surrender.”

“How many escaped?” Festuscato asked and pointed down the road toward Londinium.

“My eyes were on the battle,” Hellgard admitted.

“About five hundred,” a big Saxon with an eyepatch said and he came up to join the group. “Gregor,” he gave his name with a big smile, but that was all he said before he got interrupted by one of Deerrunner’s elves who came racing across the water and up to Festuscato.

“Lord, the Huns are coming, Lord Julius driving them on.”

Festuscato looked to Constantine, and the man started to yell.  “Constans, get those prisoners on the road, away from the ford, face down and guarded.  Get the rest of your men behind the barriers.  Ban, take the monastery side.  Hellgard, the riverside.”

“You heard him,” King Ban yelled at his men and waved them toward the monks.

Hellgard paused only to look at Festuscato smile before he began to yell at his men to take cover.  Constantine looked at the Saxon, but Gregor spoke first.

“We hide real good,” he said, and he grinned an elf-worthy grin before he also began to yell.