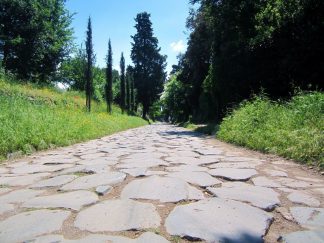 Festuscato had no idea what year it was and honestly did not care.  Living just south of Rome in a time of warming, he did well to know what season it was.  Mirowen began to correct that, first by teaching him her British tongue, which he already knew some from it being spoken around the house, then eventually by making him sit and learn to read and write, not only in his native Latin, but in Greek.  When he got older, she forced him to converse in continental Gallic and Old German as well.

It turned to 423, a year when they apparently had a civil war going on.  Castinus, the bad guy, forced the appointment of a man named Joannes to be the new Western Roman Emperor.  Father wrote to the Eastern Emperor, Theodosius, and persuaded him to appoint someone else.  He appointed Valentinian III, a child, and his mother, Galla Placidia as regent until he came of age.  So, they had war between the west and the east, and Mirowen took local matters into her own hands.  She taught Festuscato and his friends how to shoot a bow and hit a target.  She taught them how to wield a knife and defend themselves.  Most of all, she taught them how to escape and hide when the odds were against them, so they could come back and fight another day.

Festuscato turned eight in 424, and the summer turned long and hot.  That was the summer Castinus, the bad guy, decided to eliminate his enemies in the senate, which was anyone who secretly supported Valentinian with money.  How he made his list, no one knew, but it appeared to be accurate; though some, like Festuscato’s father, were obvious.  Festuscato felt surprised when his mother made no objection to the boys learning to defend themselves.  Six months later, Festuscato’s father talked about moving the family to their estates by Ravena which sat well within Valentinian’s territory.  Sadly, he did not move soon enough.

A balmy afternoon arrived.  Festuscato and the boys lounged around the woods just down from the house, at the side of the house where the tenant houses could just be made out in the distance. The woods separated the lands and fields of Lord Agitus from his neighbor, Velleius Fulvia who was Senatorial rank, second class, Vir Spectabilis, and who said that was sufficient because he preferred the quiet life and had no serious interest in politics. Besides that, he was reported to be a miser who had no intention of buying a first-class invitation to the Curia.

Festuscato had met his neighbor several times, generally when he messed around in the man’s garden, and once when he painted “F C Rocks” on the man’s barn.  Of course, he had not done any such thing since Mirowen arrived.  He could not lose her, much as he tried.  She stayed, always there, somewhere, in the background, virtually invisible, watching. On the other hand, as he had thought, there were compensations.

“Gaius needs target practice,” he shouted into the wind.

“Yes you do,” Dibs responded as Mirowen showed up from somewhere.  She had a scroll in her hand from the extensive Agitus library collection.  She had been reading all about Julius Caesar, and King Bodanagus, the better to know the human race, she often told Festuscato.

“I imagined you boys were going to laze away the whole day,” she said.  “Come.  The target is already up.  Let us get your bows and begin.”

“When do we get to practice on a moving target?” Festuscato asked quietly.

“Not this time,” Mirowen said, but she smiled because certainly a still target would only be good for the basics.

“Velleius Fulvia,” Festuscato named the man who rode up to the front gate with several other men in tow.  “What’s up?” 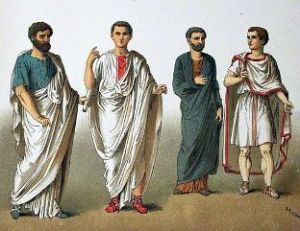 “They look like clerics,” Gaius said.  Festuscato shook his head.  His father was a Christian, certainly, but he was not exactly a pious man.

“Maybe they are collecting for the poor,” Felix suggested.

“Not from Velleius Fulvia,” Festuscato and Dibs said at the same time.

“He’s a Humbug,” Festuscato explained.  “You know, a Scrooge.”  No one understood what he was talking about, but then he did not either, exactly.  They got their bows and plenty of arrows.

Festuscato and the boys mostly hit the target with their arrows.  Festuscato pushed himself to be the best, but Dibs got pretty good, too. Felix was not bad.  Gaius needed work, but Mirowen seemed wonderfully patient.

Suddenly, forty more men appeared on the road, and these looked like ruffians and brigands. They came to the house like an invading army.  The front gate and the front door proved no obstacles, and soon there were shouts and screams from inside the house.

“Boys,” Mirowen said sharply.  “Bring the bows and arrows.  Come!” She made it a command, and she took the boys back toward the edge of the little woods that edged the property on that side. Someone inside the house must have been watching, because shortly, twenty men came out of the side door and started toward the boys.

“Get all of the boys,” one man said.  “That way we are sure to get the son.”  They spread out and zeroed in on the trees, some with bows ready, but mostly with swords drawn.

“Stop!” Mirowen stepped out when they were still some distance away, but she was able to make herself heard.  “These boys are under my protection.”

The men stopped, but only briefly to laugh before they yelled and shouted and charged. They began to go down, one arrow per customer.  Then two other archers joined Mirowen and in almost no time, every man except one had died, and that one, mortally wounded, moaned on the ground.

Festuscato stepped up beside Mirowen and took her hand.  She had put away her bow, but had her long knife out in her other hand. The boys were a bit slower, but they followed along while the two men who had mysteriously appeared questioned the one man still living.  “Castinus,” the man freely admitted before he died.  Then the two men went into the house to finish the rest.

Dibs stepped up to Mirowen’s other side and complained.  “I didn’t even get to fire my arrow.”

Mirowen squatted, though Dibs stood tall for an eight-year-old.  “And pray you never need to,” she said.

“Those are an elf and a fairy.”  Festuscato watched the men.

“Wait.” Festuscato heard a scream come from the upstairs and ran after the men.  Mirowen and the others kept up, but inside the house it seemed all chaos.  A good dozen ruffians carried swords and drawn knives, and some of the sharp weapons had blood on them.  Festuscato was not put off by the blood, because he no longer stood there. Diogenes of Pella took his place, and he came dressed in the armor of the Kairos and had Defender, his long knife in his hand.  Excalibur, the sword, stayed on his back.

Diogenes called and knew his voice would be heard no matter the yelling and screaming in the house.  Atias and Roan attended him.  He sent Roan in one direction.  He sent Atias in the other, and he took the center and the open courtyard.  He killed a man in the foyer, and pulled his sword when he reached the court.

A man, a cleric came stumbling into the courtyard from a back room where he had been hiding. Two ugly fellows followed, clearly with murder on their minds.  Diogenes let Defender fly straight into the chest of one of the men.  The man fell, shock and surprise on his face, but his fellow saw something and swung his sword down toward the cleric and Diogenes, like he could not make up his mind.  It proved a wild swing which Diogenes easily parried, and Excalibur cut across the man’s belly all in the same motion.  The man collapsed and his insides greeted the tile flooring.

An arrow came from the upstairs balcony that overlooked the courtyard.  It bounced off the armor of Hephaestus and would not even leave a bruise, but it got Diogenes to look up and growl, a pure Macedonian growl. The man took a big step back before Mister March shoved the man off the balcony.  The man screamed, but it became a short-lived scream.

Diogenes called to Defender, and it vacated the man’s chest, shook itself clean of blood in mid-air and raced back to Diogenes’ hand.  Excalibur flew into the air, cleaned itself and sheathed itself across Diogenes’ back.

“All clear.” Diogenes heard the call from Atias and saw the man wave from the balcony opposite Mister March.

“Done,” Lord Roan added from some back room where he could not be seen.

“Festus,” Mirowen called, but it sounded like a searching call, not a cry for help call. Diogenes nodded and went away. Festuscato returned in his own clothes, with his own bow in one hand, but he held tight to Defender with his other hand.  He stepped up to the cleric.

The cleric looked up, a handkerchief in his hand full of sweat from his brow.  “Yes, yes.  Where is the young man who fought so bravely?”  He looked around for Diogenes.

“This was the young man,” Lord Atias said as he came to the courtyard and put a hand on Festuscato’s shoulder.  “Young Agitus himself.”

“It was an exercise of great courage on the part of one so young,” Lord Roan said, as he appeared in their midst.

“More like an exercise of great stupidity,” Mirowen said, as she marched from the back followed by three boys who gawked at the dead.  “Mister March,” she called.

“Oh no,” Festuscato whined.  “You’re not going to spank me.  Aren’t I getting too old for that?”

“Son, you saved my life,” the cleric spoke and reached out to Festuscato for a hug. Festuscato took a good look for the first time at the dead men around him, and he thought to say something to the cleric.

“Forgive me, father, for I have sinned.”  The cleric just laughed and hugged Festuscato all the harder as the tenant farmers came pouring into the house.  They carried knives, cleavers, axes or whatever sharp farm implement they could carry and were prepared to do battle.  They were not slaves, more like serfs, but Lord Agitus had been good to them and they knew if they lost their bread and butter, they had nowhere else to go.

“Hold it!” Mirowen shouted, and the men paused. “Get your muddy, filthy shoes off the tiles and carpets.  You need to take the dead outside for burial, and be quick about it, before they stink up the house.  I’m going to have to get this house scrubbed from top to bottom.”  She put her hands on her hips and frowned.  The men looked to Mister March, but he knew what was what.

“You heard the Princess.  Get your shoes off and start collecting the dead.”  The men nodded and some tipped their hats.

Festuscato suddenly broke free of his hug.  “Mother? Father?”  He started to ask, but Mister March grabbed him and hugged him.

“Hush,” he said and shook his head over Festuscato’s shoulder.  Mirowen took over, and Festuscato began to cry.

Velleius Fulvia took that moment to come out of a cupboard.  “Is it safe?” he asked.  The cleric and the boys all laughed, loud.