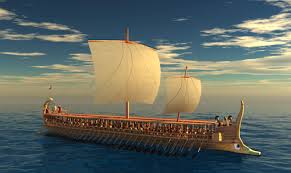 After 1176 BC Anatolia and the Black Sea.  Kairos 68: Althea, the Argonaut

“Althea, dear, come help your old father.”  Argus put his hand out and twelve-year-old Althea let him lean on her shoulder so he could stand.  She walked him to the ship’s railing, though he was old, and lazy, not a cripple.  Still, she was his daughter, his only living child, and since mother died, Althea felt that obligation thing to do what she could to make his last days comfortable.

“Do you know what city that is?” Argus asked.

Althea nodded.  “The land of the Doliones where Cyzicus is king.”

“Uh…” Argus pursed his lips before he asked another question.  “What kind of a name is Cyzicious?”

“Uh…” Argus pursed again before he turned to the ship and to the helmsman.  “Euphemus, make for the city of the Dolimoes and King Cyckious.”

Althea invented the face palm, as three young men came to join them on the starboard side.  Althea knew the men well.  In fact, by then she had gotten to know the whole crew, but these she knew especially well, from the time she spent with Chiron.  It was Artemis who brought her to the centaur when she was found wandering around the woods, alone.  Well, she had her fairies with her for company, but she was only five, and since she could not tell where she was from or who her family might be by name and city. Artemis thought she would be best put somewhere safe.

“What am I going to do with a little girl?” Chiron complained.  “I train boys here.  We only have boys.”  He stomped his back legs and fretted.  “Boys, come here,” he called to three boys who were telling jokes in another part of the big cavern.

That was how Althea first got introduced to these three.

“Father says you shouldn’t argue with his sister.  And he thinks she is cute.”  Twelve-year-old Asclepius, now the ship’s physician at eighteen, grinned at her.

“I have a feeling my father would say keep her.  We could ask Athena, but she would probably say train her, too.”  That was Heracles, now all of nineteen-years-old.

“I’m not sure if my father is alive or dead,” the third one said.  “But she is cute.”  That was the eldest, fifteen at the time, and now twenty-one.  Jason was the reason they were on this quest.

“I could learn to read if I had someone to teach me,” Althea said, at five-years-old.

Chiron stroked his beard and shuffled his front legs.  That request settled the matter.

“Hey Althea, watch this.” The people aboard ship got interrupted by the other twelve-year-old on board, Iolaus, Heracles’ nephew.  The boy had climbed up the rigging and hung upside-down.  Someone bumped the rigging by accident, and did not notice as the boy’s legs let loose and the boy plummeted head first to the deck.

“You could have fallen overboard,” Heracles yelled.

“Too bad he missed,” Asclepius mumbled, as he ran to make sure the boy was all right.

“So, what is this place?” Jason wondered, changing the subject.

“How do you know all this stuff?” Heracles asked.

A woman came up and looked around at everyone, ending on Althea’s snooty face.  “Are these men bothering you?” she asked.

“No,” Althea admitted.  “They are just being men.”  She looked toward Iolaus and was glad to see he didn’t break anything.

“Maybe it knocked some sense into him,” Heracles said, having caught the look.

Jason, Argus and the woman, Atalanta, snickered, before Atalanta spoke again.  Meleager is at the oars.  Maybe we should help.”

“Oh, yes.  Right.”  They went to do that very thing, Atalanta with them.

“Captain?” another man stepped up, and Althea thought he should have saluted.

“Is that a dock?” Argus pointed generally toward the town.

“That is where we need to go,” Argus said.

“Sir,” the man turned and began to give orders.

“Good thing I came along to captain my ship,” Argus said.  “This is without doubt the best and biggest ship ever to sail the seas.  I wouldn’t trust it to anyone else.”

“Yes Father,” Althea said as the man returned from yelling orders.  “And stopping for food and fresh water in a friendly place is just what we needed to do.”

Althea nodded to the man, and he smiled, now that he knew what they were doing, and he went to inform the others, and check to see what supplies they actually needed.

Sukki looked at the fire as she talked.  “I can’t go back, even if I could go back.  I pledged to return to the earth and live my days on the earth, or die trying.”

“People say that all the time, and some fail,” Alexis said.  “But no one honestly expects such people to die.”

Elder Stow nodded.  “I have learned on this journey that the gods do not make promises.  This is wise.  But for the Gott-Druk, such a pledge is a matter of sacred honor.  Most keep their mouths shut when such opportunities come up, but when the cause is painted as something like a sacred cause…”  Elder Stow did not finish the thought, but the others got the idea.

“Well, you are welcome to stay with us,” Lockhart said.

“You are going to like the future,” Alexis said.

“And, when we get there,” Katie added.  “I am sure there will be plenty for you to do, if you don’t decide to go with Elder Stow.  I am sure whatever you like will be fine.”

“I don’t suppose you could all go away and give this world back to my people,” Sukki said, though she knew better.

“Sorry,” Lincoln said.  “That is a wish that is not in our power to grant.”

Sukki understood.  “Excuse me,” she said, and went into her tent without looking up.

Elder Stow sighed.  “It will take time.  It may take a long time.”

People seemed to understand, and went to bed, hoping Sukki would adjust.  She seemed a shy, but likeable person.

Katie and Lockhart stayed up, having the nine to midnight watch.  Katie felt nervous, but could not pinpoint exactly what she was feeling.  Lockhart thought it might be because they had a relative stranger in the camp.  Katie was not sure.  Finally, she looked back the way they came and mouthed her most pressing feelings.

“I hope Artie is all right.”

Lockhart hugged her.  “I am sure things worked out well for her.”

When the moon rose, deep in the Anatolian hills, where those hills fell to the edge of the Black Sea, three sets of eyes watched the campfire, and the strange people with their big horses that had intruded into their territory, and they discussed what to do about them.