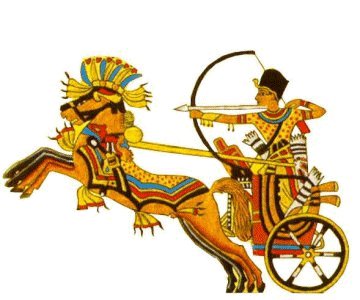 The travelers and their Hyksos companions stopped for lunch, and Hebron finally had a chance to do some explaining.  “We first encountered the gas in Egypt.  We assumed the Egyptians made it, but discovered the Hatti, people from back home, were selling it and stabbing us in the back.  Lord Balor volunteered to return and end the gas making.  He wished to take only his twenty rangers—that is what he calls them—rangers, but the king insisted he take a whole company.”

“How many?” Katie asked.

“But what about the Anazi?” Artie asked, anxious to hear about her own people.

“Well, young lady,” Hebron said, with a fatherly kind of smile for Artie who he imagined was a young woman.  “We found them first, lucky for the whole world, Lord Balor says.”

Artie grinned and turned to Katie and Alexis.  “He called me a young lady.”   She said it like she got a medal, or won a trophy.

“And you are,” Katie said.  Alexis just hugged Artie.

“I do not understand,” Ed took the tender moment to interject.  He looked at Lincoln and Lockhart.

“Don’t look at me,” Lockhart responded.  “Apparently, I don’t understand anything.”

Katie gave him a sour look, and he returned the same, but Decker interrupted before they could share words.

“So, what is the situation now?  Where do things stand with the Anazi?”

Hebron shifted in his seat and glanced at Decker.  “Basically, they watch us but leave us alone because they know we can take down their air ships.  They don’t know about our smidgen friends, but most of their smaller ships have been crashed, and one of their three great ships as well.”

“Wedge says with the right sort of magic you can kill any machine,” Cherry spoke up from where she was commiserating with Boston and Alexis.

“Lord Balor ordered the gas used on the invaders.  He had his girl, Anath, clean the area as quickly as possible, but after, he says there may be only three Anazi still able to give orders.  There are still a couple of hundred machine men…” Hebron paused to point at Edward.  “Like your friend.  They have set a circle around the great ships and keep a good watch.  We are in something like a standstill.”

Decker said nothing, but nodded that he understood.  Lincoln and Lockhart stared at Edward, and looked uncertain before Edward opened-up.

“There are more than three remaining, but the others are sick, and some have died.  They are waiting for the invasion force.  Please.  I saw my people suffer because of the gas.”

Artie looked upset until Alexis spoke.  “And did you see humans suffer as well?”

Ed looked at Artie and both dropped their heads when Artie spoke.  “All life is precious.”

“Nothing,” Lockhart answered.  “I imagine the Kairos has something in mind, or will think of something.  And he will probably tell us to move on while we can.”

Artie turned to Katie, her face showing clear distress.  “What should I do?”

“Pack it up,” Lincoln shouted to the crew.

“Wait, wait,” Elder Stow objected.  “I’ve almost got the program right.”  He pressed a button on his scanner, and Artie looked startled, but Ed stiffened for a few seconds.

“What was that?” Artie asked,

“Nothing yet,” Elder stow answered without looking up.  “I think I’ll ride in the back on the catapult wagon so I can keep working.”  He whistled, and his horse came.  He tied the horse’s reins to the back of the wagon and found a space where he could sit and work, undisturbed.

An hour later, in the afternoon, an Anazi transport came into view.  People imagined it would fly over their head and pick up the remains of Ed’s fighter.  People stopped moving and bunched up to watch.  When it looked large, overhead, the ship opened fire.  People screamed.  People ran.  One shot exploded in the front group, tossing a dozen men in the air.  A second shot exploded by the wagons and killed two of the mules.  The third shot ran into an invisible wall and reflected back toward the clouds, just missing the ship.

Elder Stow had the scanner in his hand, and threw the switch to put up the screens.

The ship moved higher in the sky and aimed, but the fourth and fifth shots did not penetrate.  They made only a yellow spot with a hint of orange, briefly, where they struck.

Katie added, “Let the ship go.”  She noticed the ship had already passed over them and moved on.

Alexis yelled from the edge of the group.  “Elder Stow.”  The wounded men were outside the screens and she could not get to them.  Lincoln and Artie followed Alexis, and Ed trailed Artie.  Elder Stow turned off the screens, but only when the Anazi ship disappeared over the horizon.

Lockhart, Katie, Hebron, and Wedge all agreed.  They buried the three remaining gas canisters, and thanked God none of them had cracked open when the Anazi blast killed the mules.  They put the half-dozen dead in that wagon.  The half-dozen wounded rode in the catapult wagon with Elder Stow, after they trashed the catapult.  Alexis insisted on riding with the wounded as well, which freed Misty Gray along with Elder Stow’s horse to trail behind. 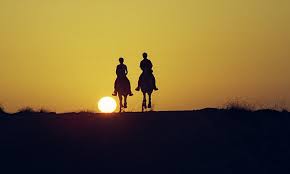 “The thing is, these horses are not trained to pull a wagon,” Lockhart apologized to Hebron.  He understood, and said he had twenty men who volunteered to pull the wagon by hand.  He said, the dead men deserved a proper burial, and they dared not take the time there, in the desert.  If the Anazi had broken the unspoken truce, they needed to get back to Lord Balor as quickly as possible.

Lincoln agreed to ride alongside the wagon that carried the wounded, Alexis and Elder Stow.  Decker also stayed with the wagons, as he said, to ride shotgun.  Wedge, Cherry, and most of the smidgens stayed with the wagons, but the rest of the travelers and smidgens followed Hebron and his two chariots.  They moved quicker than the lumbering wagons and arrived an hour before sunset, or as Hebron guessed, an hour or two before the others.