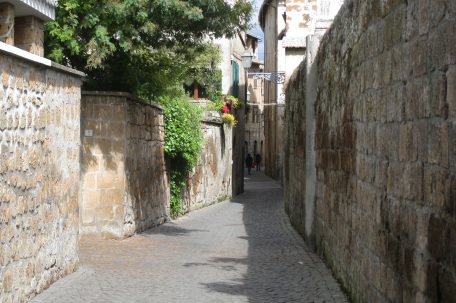 They reached the outskirts of Balazarius, the port city of the Byzantines, around eight the next morning.  Runners had gone out the night before so they hoped everything was in place and ready to go.

“I remember you telling me about your Fourth of July.”  Alexander explained to Jill and Ethan.  “I thought we might call it Cherokee Peace Day, or maybe Cherokee Pride.”

Ethan hardly had time to wonder what Alexander meant as the first rockets and fireworks cracked in the sky.  Soon enough, there were firecrackers and such going off everywhere, and quite a few Byzantines appeared to join in the fun while the crew closed in on the Governor’s Palace.

“Now,” Jill said.  She dragged the crew across the street and straight through the garden gate.  If she had not insisted, Lars, Manomar and Ali Pasha would have stayed to see the fireworks.  Colonel deMartin, Ethan and Alexander each had to grab a man and drag them forward.  When they got inside the garden, Alexander swore.  The ship had been moved after all.

“Actually.”  The voice came from the porch where the same black headed man dressed in flowery clothes and sporting feathers, who had argued for war in the face of General Gordon, and who had berated the Cherokee in general, and Peter Alexander specifically as cowards, sat sipping what looked like sweet tea.  “My Master has sheltered the vehicle inside a covering to keep it out of the weather.”  He smiled and motioned with his arm to invite them in.  “Please,” he said.  “My Master is waiting for you.”

Lars looked mad at having been caught.  Ali Pasha and Manomar thought nothing of it.  But Jill and Ethan both looked at Alexander and Colonel deMartin.  Both men shrugged at the word “Master,” and Alexander whispered.  “Even the Byzantines no longer keep slaves.  Why should they when modern machines can do the work better, faster and cheaper?”

A man with a glass of whatever that liquid was had his back to them, while the man they knew

from the peace talk went to stand by the door and await orders.  The ship, meanwhile, was clearly visible through the back window in what looked like a hastily built garage without a front door.  Ethan stared for a minute, because the so-called ship looked like no more than a door.  It was a shimmering white slab of light, nothing more, and hardly what he expected.

“I made mine look like a British Police Box in London.”  Jill whispered.  “That was before I ever heard of the Good Doctor.”

“I remember that show.  I used to love him as a kid.”  Ethan whispered back hastily.

“Exactly.”  Jill and Ethan agreed, but quietly because the man by the window looked ready to speak.  He appeared first to take a large whiff of air.

“A Gaian,” he said.  “I had the last one’s head on a platter.”  He turned around and Jill gasped.

“Nelkorian!”  The man had no face; no eyes, ears, nose or mouth.  He had gloves on his hands besides, so no skin showed at all apart from the overly large head covered in motley colored gray-green and wrinkled skin.  “You freakish mutant.  We wiped you out.”

The Nelkorian raised a finger.  “You missed a few.”  Ethan felt the wicked smile.  There was no other way to describe it.  He saw features form on that bulbous head, but they did not quite look real to his eyes, and he wondered if his nano-chits were acting on his vision to be sure he did not forget the truth.  Then he felt something probe his mind.

“No!”  He fought it off.  “Psychic defense.  Psychic screen.”  He strained for a minute before he calmed.  Jill grabbed hold of him, but she seemed to be in her right mind as well.

“But he is not Gaian.  I am sure,” the Nelkorian said.  He took another whiff of air.  His lips had moved, but they looked to Ethan as if they were a little out of sync with his words.

“My husband,” Jill said flatly.  “Let these people go.”  She put some strength into her voice, and Ethan saw what was happening.  Colonel deMartin drew his gun as Lars drew his.  They aimed at each other.  Manomar and Alexander had their knives out and faced each other as well.  Poor Ali Pasha was confronted by the man at the door.  That man had drawn a gun and he aimed it point blank at Ali Pasha’s heart.

“He has no sensory organs, but a mind capable of taking over others and sensing things through them.”  Jill spoke hastily as Ethan watched the man across the way lift his glass.  The Nelkorian did not even bother to put the glass to his pretend lips.  Some of the liquid just vanished.

“Taking over others?”  Ethan asked.

“Ahh.”  The man sounded refreshed as if he had actually drunk some of the liquid.  “I do have sensory organs, only they are all internal and able to enhance the experience, shall we say.  But possession is such a nasty word.”

“Hardly.”  The Nelkorian laughed.  “I want to add your head to my collection, and your husband’s head as a matched set.”  He turned his back again.  Ethan figured with no eyes, the Nelkorian hardly needed to look at them to see them.  “I had planned to turn your ship into a flower pot, and I will as soon as I learn the secret to breaking in.  This is a fine world with much potential, don’t you think?  My brothers and I will enjoy living here, and by the time the husk of this world is all that remains, we will be numerous enough to invade all sorts of places.  Perhaps your husband’s world.  I caught quite a good glimpse of his Earth before the psychic defense of your nasty, inhuman bits went up.”

A young woman’s head, severed at the neck, lifted slowly out of a wicker basket and floated in the air right up to face the couple.  She was a very dead young woman, and Jill had to hide her eyes in Ethan’s shoulder.

“Being possessed by a Nelkorian slowly drains the life force.”  Jill whispered into Ethan’s shoulder while Ethan looked once again at his friends, who were ready to destroy each other.  Apparently, they had no psychic defense, or an insufficient one to fight the Nelkorian.

“The Elders will come,” Jill said.  She turned again to face the monster.  “You will be destroyed here as you were in your home world.”

“I think not,” the Nelkorian responded.  He turned and raised his finger again.  “I believe I have learned how to block even their tracers.  They will hardly know what is happening until it will be too late, even for them.”