Ashish picked up Emily and Heinrich and drove them to Lisa’s, taking great care to park where the car could not be seen from the house.  A police car had already parked there.  Ashish offered an explanation.

“Rob Parker, Millsaps and Mitzy.”  Then he added a further thought.  “Mitzy took the afternoon off.  Carmine is covering the front desk.”

Emily nodded as she got out from the back seat.  She helped Heinrich.  He did not look well.  He was sweating and his eyes did not appear to be in focus.

“I’m fine.  I’m fine,” he insisted, but he was terribly old and for the first time he began to look that way.  Emily got out their weapons.  Ashish got out the two boxes of donuts and the big box of coffee with cups.  Heinrich suddenly looked very much better, and commented.  “Activated.”  Only Emily knew what he meant, but she was glad to hear it.  Once a member of the council got activated, he became even stronger and faster then she could ever hope to be.

The clothesline strung from Lisa’s attic to the ground ended in the trees that edged that side of the yard.  Mister Murray next door liked his privacy.  Josh’s motorcycle sat parked on the street, not far from the end of the trees.  They all figured the bike was Lisa’s means of escape in case her traps did not finish the job.  Even as Heinrich, Emily and Ashish stepped up to where Mitzy, Millsaps and Rob Parker were hiding behind the trees, an unexpected visitor arrived.  A state police vehicle roared up, blocked Josh’s motorcycle, and left the lights flashing while two troopers stepped out.

Mister Murray chose that moment to come tumbling out of his house and yell.  “Get them off my yard!”

Millsaps ran to the newcomers and showed his badge while Ashish grabbed the young one and forced him to turn off the flashing lights.  Rob Parker and Mitzy blocked off Mister Murray’s approach and told him to shut-up.  Heinrich slid up alongside Millsaps thinking he might be better able to answer any questions.  Emily just stood there, cruller in hand, and frowned. 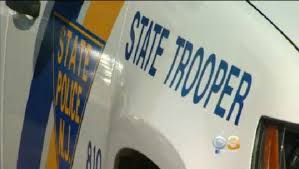 “Scott!”  The Sergeant, a woman of about fifty, yelled at the young one when the lights went off.  “Rookie,” she shook her head.  “So what is this all about?”

“You get on the phone with Captain Rogers,” Millsaps encouraged the officer to return to her car.  “Tell him Detective Schromer is on a stake out and does not want a bunch of state troopers getting in the way.”

“Your Captain Rogers,” Millsaps nodded.  “Or I could call the Governor.”

The older woman did not look too certain, but she got back in the car and shut the door to make a private call.

“No, but Lisa saved his life about three years ago.  Long story.”

The rookie walked with Ashish up to where Emily stood, still frowning.  “So, drug dealers?”  The rookie asked.

Ashish smiled.  “Worse than that.”

Ashish and the rookie stopped walking where Ashish could go for a donut.  “Terrorists?” the rookie tried again.

“Emily Hudson,” Emily introduced herself and stuck out her hand.

“Sebastian Scott.”  The rookie took her hand, but stared at her sword and the wicked looking spear that leaned up against the tree before he took in her face.

Millsaps and Heinrich stopped their quiet conversation when the window in the patrol car went down.  The woman looked pale.  “The Captain said to ask if it is like vampires or like aliens.”  She swallowed and clearly did not know what else to say.  Millsaps looked at Heinrich who took up the explanation.

“Tell him it is like werewolves except stronger, faster and hungrier.”

“And tell him to keep away,” Millsaps added before he turned to Heinrich.  “I am already afraid there are too many of us.  The creatures might sniff us out and not come, do you think?”

Heinrich nodded slowly.  “According to Mister Mousad, Lisa told no one.  She did not want to risk anyone else’s life.  The only way Mister Mousad found out was because she used the police helicopter to pick up her husband and children so it would look from the ground like they never left the house.”

Emily and Sebastian let go of the handshake and a stray thought passed through Emily’s mind.  At least this one wasn’t manufactured.

“Look,” the man turned to Ashish.  “What could be worse than terrorists?”

“Night Creatures,” Emily answered to regain the man’s attention.  “And don’t think that pea shooter of a pistol will help you.”  She pointed and he looked.

“You new on the force?”  Ashish asked.  Sebastian’s head turned again to the man.

“Since the first of the year.  Officer Holmes took me on because she said it was better than sitting behind a desk.”  He saw her open the trunk of the patrol car.

“Margaret,” she was saying.

“Heinrich.”  He shook her hand and smiled.  “Welcome to my world,” he said at the same time Ashish spoke to Officer Scott.

“Welcome to the really dark underbelly of the world.”

“Scott!”  Margaret Holmes pulled two semi-automatic rifles from the trunk.  “Move this vehicle quietly down the street.  Around the corner would be better.”  She turned to Heinrich and Millsaps.  “Captain said we have to stay.”  She turned to Mister Murray, still waiting behind the wall of Rob Parker and Mitzy.  “I suggest you lock yourself in for the night.”

“Better,” Heinrich interrupted and stepped up with a wad of bills in his hand.  “Grab a few things and spend the night in a motel.”  He handed over the bills.  Mister Murray retreated to the house, and Rob Parker encouraged him.

Mitzy got on her phone.  She covered it as she spoke to Heinrich, Millsaps and Officer Holmes.  “I ordered Pizza delivery for eight o’clock.  I figure I better add another pie.”

It was nearly five when Dickenson drove to Latasha’s home.  Wendy and Mini were there, and even Keisha made the trek because they were all worried.  Latasha felt bad.  She had her phone with her but neglected to phone home.  Once it got explained, that Latasha was fine and she got a ride home from the officer because she helped solve a mystery and not because she was in trouble, Latasha’s mother became her warmest and most welcoming self.  Soon enough, they were all sitting down to supper, and it would have been trouble free if John and Leah had not kept trying to touch Officer Dickenson’s gun and baton.

“Tom,” Officer Dickenson introduced himself to Latasha’s mother and in that moment, Latasha, Wendy, Mini and Keisha all decided Tom was the most wonderful name in the world.

After supper, they talked briefly on the porch and left Latasha’s mother to put the little ones to bed.  Tom had to be at the station by nine to go on duty, but he told them something of his background.  Latasha thought especially that he was talking to her.

“I grew up in Newark.  In my neighborhood a person either ended up in front of the bars or behind them.  I chose in front.  I got an associate’s degree, went straight through the police

academy and landed a job here.  I’ve been on the force for three years, but until now I always did my job and minded my own business.  I don’t think I can do that anymore.”

Latasha spoke because the others seemed too tongue tied.  “All I can say is I am glad you were there with the spiders.  I was scared.”

“Spiders?”  Mini shrieked softly.  She had a phobia about spiders, and most things.

Officer Dickenson laughed nervously.  “I am deathly afraid of spiders, too,” he assured Mini.  “I was just thinking I was glad Latasha was there.”  He looked at her, and for the first time in her memory, Latasha blushed.