Latasha went to the movies with Wendy and Mini, and she did not ask Keisha if she wanted to come along.  Keisha was not speaking to her.  Somehow, Keisha twisted things to the point where she blamed Latasha for Janet’s death.  If Latasha just let Janet have her boyfriend.  If she did not make Janet feel so guilty into revealing the drug deal in the parking garage.  If Latasha had not become such a righteous ass, thinking she was going to join the police force, Janet would still be alive.

Latasha explained in her most exasperated voice.  “It was the bad guys who killed Janet.  Why do you want to keep me from putting the bad guys in jail?”  But Keisha would not listen, so Latasha went to the movies with Wendy and Mini.

The movies were a safe place.  The girls could talk or just watch the film, depending on how things worked out.  They were not stuck at someone’s house with potentially awkward silences.  Wendy and Mini wanted to see if they could still be friends with Latasha, and Latasha needed to find out the same thing.  It turned out, freshman year off made little difference.  They slipped back into the same relationships and even laughed when they remembered the same jokes they used to laugh at.  It was good.

Of course, all through grade school, Wendy and Mini, Janet, Keisha and Latasha were all friends.  Wendy and Mini only started to back away during middle school when Wendy decided she wanted to be a lawyer and Mini thought she might be an accountant, like her father.  Now that Latasha had some direction and her grades were improving, Wendy and Mini were open to being friends again.  Latasha was glad until on the way out they heard the scream

Latasha ran toward the scream.  Wendy and Mini hardly knew what else to do, so they followed.  It came from around the corner at the dark end of the parking lot.  Latasha found a man, dead.  He was about twenty-eight, dark hair, looked Hispanic, and there were little packets of drugs on the blacktop all around.  Latasha guessed she startled whatever was going down.

When Wendy and Mini arrived, Latasha found her eyes drawn up the side of the building.  Someone, or something appeared to be climbing directly up the brick side of the movie theater.  She could not be sure.  It was all in shadows before the movement topped the building and disappeared.

Latasha got out her phone and called Detective Lisa.  She left a message and called Mitzy at the police station to send a car, and an ambulance to pick up the body.

“We can’t wait around for the police,” Wendy started to back away.

“I thought you wanted to be a lawyer?”  Latasha came right back.

“Then you better get used to the police,” Latasha said and she looked at Mini.

Mini put her hands up.  “Dominica always sticks with her friends.  You don’t mind if I hide behind you when the police show up.”  Latasha did not mind.  Wendy just frowned as a patrol car came roaring in, lights on.

It was officer Dickenson, a young and well-built African-American male who made Wendy and Mini smile and who tied Latasha’s tongue in knots the one time she met him.  “Latasha.”  He recognized her right away, or Mitzy told him.

“Here.”  Latasha pointed at the body.  “I got pictures for Detective Lisa, I mean Detective Schromer.”  She held up her phone.

Dickenson nodded and knelt by the body.  The man was definitely dead.  “I don’t get it,” he stood.  There were cocaine packets all around the body, and money, too.  “A dealer, carrying and it is all just left here.”

“I think we interrupted the deal,” Latasha said.

“Any idea which way the perp. went?”

Latasha pointed up the side of the building while she spoke.  “And I am not sure it was human.”

“You called Schromer?”  Latasha nodded and Dickenson also nodded as he stepped to his car to report in.  “Good, because she deals with all that spooky stuff.”

Emily got up extra early.  She was going to drag the ROTC freshman on a five-mile jog.  All she had to remember was to not set as wicked a pace as she did last time.  Last year she nearly killed a couple of poor sophomores.  For her, a five-mile jog, even in full pack was no big deal, but even practically walking, most of the freshmen would come in huffing and puffing and collapse to the dirt.  She imagined Jessica and her team would do well enough.  They had gone early to stretch and get warmed up.

Emily stepped outside when it was still dark.  The walkway lights were on, and she spied two women in jogging outfits no doubt trying to get rid of last night’s supper.  Eat too much and then jog it off was not a good plan, Emily thought.  Fortunately, that was one problem she would probably not have to worry about for some time.  She had the same high metabolism Latasha had, she just did not show it like Latasha in the constant tapping of her toes and drumming of her fingers. 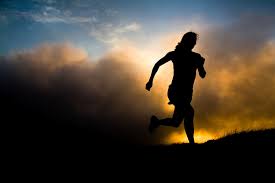 Emily pushed a hand through her hair as she caught another sight.  There was a guy in his pajamas, barefoot in the cold of December in New Jersey.  Apparently he was not concerned that his fly was wide open, his shirt was torn and he was in danger of losing his pants altogether.  He got in the way of the joggers and grunted.  He grabbed the hair of one and put it to his nose.

“Hey!”  Emily shouted as the women yelled at the guy to leave them alone.  They hurried off as Emily approached.  The guy looked briefly at Emily like a deer caught in headlights, then he took off running into the dark.  Emily wanted to chase him down and ask him what he thought he was doing, but she had to meet the freshman class.  She tried to picture the guy’s face in her mind with the hope of recognizing him again if she saw him, but all she could really remember was the blank and empty stare in the guy’s eyes.  It did not look right.  Emily shivered in the cold.  She had to jog to the gym to warm up.

Next Monday, Emily, Latasha and Detective Lisa begin to pull some threads together.  It appears they are dealing with more than one mystery.  Don’t miss the Elect II-10, Green People, and…