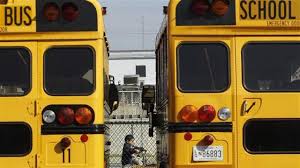 Monday morning, Latasha, Keisha and Janet walked to school in the dark.  There was a cold March wind and some icy spots where they still had to walk carefully.  The stars were hidden behind the clouds.  It was either going to snow or rain, Latasha could not tell.  Maybe it would sleet and make that impossibly cold slushy stuff that was the real harbinger of spring.

“I’m cold,” Janet’s words started the conversation even as her foot broke the ice.

“I’m tired,” Keisha had only one thing on her mind.

“I’m cold and tired, but we have to do this.”  Latasha had convinced herself that another ride with Ms Johnson might seriously injure some of the students.

“Maybe we should wait and see what Ms Riley comes up with,” Janet suggested.

“We can’t wait.  Your friend, Jason won’t survive another ride.”

“He’s not my friend.  He just lives next door,” Janet protested.  She was not fooling anyone.  She had feelings for the boy.

“What do you mean, won’t survive?”  Keisha was beginning to wake up a little.  “You mean like die?”

There was silence for a minute before Janet spoke again.

“So why are we going to face a killer?”  Janet asked the question, but by then they were at the schoolyard and coming up on the bus parking lot.

There was only one gate for the drivers because they did not want just anyone around the school busses, but then there was no one guarding the gate so it would hardly keep anyone out.  A few of the busses were already running to warm them up.  They did have to be sneaky, but finding their bus was not hard, and since it was not yet running, they assumed Ms Johnson was not there yet.  The girls went behind the bus and waited, being careful to stay hidden.

Now that they were not moving, the cold became more apparent.  Janet could not help hugging herself and stamping her feet.  Keisha, who was watching intently, kept telling her to be quiet, but it did no good.  Latasha paced a little between the bus and the fence.  She was still trying to figure out a way to stop Ms Johnson from driving.  Naturally, Ms Johnson walked up behind them.

“Are you waiting for me?”  Ms Johnson said with a grin.  Only Janet shrieked, and it was softly.

“Yes,” Latasha spoke up after she stopped staring.  “We wanted to ask you not to drive the bus today.”

“That was your great plan?”  Keisha balked.

“But why, Latasha, dear?  I find driving the bus so fulfilling”

Janet butted in.  “You mean filling.”

“That, too,” Ms Johnson said and she placed her hand up to Janet’s cheek.  Janet’s eyes went wide and she stumbled.  “And you Keisha, dear.”  Keisha did not move.  She was already squatting, holding to the edge of the bus.

Latasha stepped up and shoved Ms Johnson away from her friends.  “This is not funny,” Latasha said.  Ms Johnsons was ruffled, but only for a second.  “Keisha, get Janet out of here.”

“You are a strong one, a very strong one.  I am going to enjoy you.”  Ms Johnson pulled herself together and surprised Latasha with a punch.  Latasha got hurt and shaken by the strength of that punch.  She stumbled to the fence.  The fence helped hold her upright, and it only took a second to recover, but when she turned, she saw Ms Johnson kneeling between her friends.  The woman’s hands were hovering over the girls and she was grinning, eyes closed, singing.  Janet and Keisha looked like they were being drained for good.

Latasha raced over and kicked out just as hard as she could.  Ms Johnson lifted off the ground and flew to the next bus where she crashed loudly into the side and with enough power to shake the whole bus.  Latasha felt sure she hurt the woman and felt glad about it, but her concern was for her friends.

Ms Johnson growled for Latasha’s attention and Latasha saw something come up into Ms Johnson’s face that could not be called human.  Latasha made her little fists for a fight, but Ms Johnson simply stretched her hands out and at once Latasha felt all the strength leave her.  She was on her knees before she could think of what to do.

“I will be fed,” Ms Johnson said in a voice that grated on Latasha’s ears.  “I will…” the woman stopped talking and Latasha saw why.  An arrow stuck out of the woman’s chest.  It had entered the woman’s back.  “Oh my,” Ms Johnson said in her normal, pleasant voice as she looked at the arrowhead and the blood that followed.  She seemed uncertain of what she was seeing.  “Oh my,” she said again as a second arrow arrived, and this one burst straight through the heart.  “But I…”  Ms Johnson fell to the ground and Latasha heard what sounded like Ms Riley’s voice.

“Latasha, get your friends out of there.”

Latasha recovered rapidly, but she had to grab her friends by the hands and drag them several feet away.  When she turned, she was not entirely sure what she saw.

Something ghost-like rose up from Ms Johnson’s body, though it was not entirely ghost-like because she could see it.  It appeared to have some substance and the look on what she took to be the face was angry, and evil.  But at once, there were several tremendous flashes of light all around that made Latasha blink.  She could not see well, but there was nothing wrong with her ears.

The thing moaned and let out a wail.

As Latasha’s eyes cleared from the flashes of light, she saw what looked like men, at least little

men. They appeared to have the ghost trapped in some way, and the light came again.  This time it was a big one, but this time Latasha squinted, prepared.  The little men walked into the light and took the ghost with them.  The last thing she heard was singing.  It sounded like the theme from Ghostbusters.

When they were gone, Latasha caught a glimpse of Ms Riley at the far end of the bus.  The sun by then was preparing to top the horizon so there was some light.  Ms Riley was kissing someone.  He looked like an alien from some space ship kind of show.  For that matter, Ms Riley had the same pointed ears, and she looked as skinny as Latasha.

Latasha glanced at her friends and saw they were moving, though neither had yet opened her eyes.  When she looked back, someone was standing between her and Ms Riley.  It was a woman, a white woman, tall and stately, and as beautiful as any cover girl.  And she was frowning.

“Wisdom says you should use whatever help is offered.  Only a child wants to do it all herself.  Sometimes you need to get all the help you can.”  Latasha did not argue.  She messed up and almost died, and worse, she almost got her friends killed.  “Sweetheart, if you want to be strong, you must first be strong up here.”  The woman bent down and touched Latasha on the temple.  Then she smiled, and it was such a warm and gentle smile, Latasha could not help returning the same.  When the woman stood, she said one more thing.  “Boston, you will have to drive the bus.”  Then she vanished, but there was no light.  The woman simply vanished, like a ghost herself.

Latasha was not sure what she saw, except she saw the skinny version of Ms Riley curtsey and say, “Yes, Lady,” while her skinny alien man bowed his head slightly.  The man touched his lips once

more to Ms Riley’s lips and then turned to look at Latasha.  Ms Riley looked only at the man.  The man also smiled before he vanished, but he disappeared into another light and Latasha blinked.

“What happened?”  Keisha sat up slowly.

“Yeah,” Janet agreed, but she was not ready to sit up yet.

Latasha said nothing but looked up at Ms Riley who came close and looked utterly human again.  Latasha was sure it must have been some trick of the light.  When Ms Riley helped her up, they looked at the body of Ms Johnson.  She looked like she had been dead a long time, but she was recognizable, and the expression on her face was terror.  She was petrified, and with her dead, leathery skin, that was almost a literal description.

Ms Riley got the keys as several people finally ran up.

“What is going on over here?”  Principal Wearing was the one out front.  “Where is Jean Johnson?”

“Here,” Ms Riley said as Latasha pointed.  “I’ll be driving the bus this morning and the girls will be going with me to make sure I don’t miss any stops.”

“What happened?”  Principal Wearing stared.  Ms Johnson’s body was still barely recognizable, but beginning to crumble.  The two arrows were no longer present, having vanished with the last flash of light before the sun rose.  Only the hole in the woman’s chest remained, and the stain from what was now dry and crusty blood.

“No telling.  The police have been called,” Ms Riley said as she helped Janet and Latasha helped

Keisha get up into the bus.  Ms Riley started the bus, but left the door open, not sure if the principal or another might come up with some more questions.  As it turned out, Principal Wearing turned the gathered drivers to their own busses and walked off to the gate to await the police, and Latasha felt it was safe to ask.

“What happened?”  She sounded a bit like the principal.

Ms Riley looked at Janet and Keisha.  They were still recovering, and Janet might have been asleep.  All the same, she spoke softly.

“It was about twelve years ago certain spirits, ancient things and people were allowed to come to earth.  You might say they escaped their cages.  This was one, but I am telling you because there are still many out there.  It is only in the last couple of years that we have begun to try and find them and return them to where they belong.”

“I don’t understand,” Latasha admitted.  “What was that ghost-thing?”

“Your husband?  The one with the ears?”

Ms Riley grinned and nodded.  “The one with the ears.  I told him I could not abandon you mid-semester.  I said I had to finish the school year.”  She turned in her seat to face Latasha.  “We were hunting that thing for a year, ever since we discovered the bodies last March in Philadelphia.  These things only feast once per year.  We knew it was close, but we did not know who or what it was possessing until it showed itself.”

Latasha turned her head a little to try to get another angle on her teacher.  She thought if the light was right, she might be able to see the points in her ears again.  “Are you human?”

Ms Riley laughed.  “I was born not too far from Boston.”  She paused.  “You don’t need to know when.”

Ms Riley frowned.  “Maybe we need to add some geography lessons in our science curriculum.  Oh look, it is our turn.”  She began to drive and did not answer any more questions for a time.  When she did, it was, “There are some things you don’t need to know about yet,” and that was it.