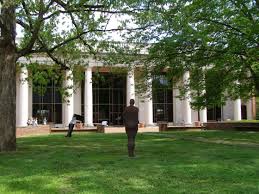 Heinrich walked the campus to get acclimated.  He wanted a good feel for the environment before he set down roots.  He knew his presence made the elect nervous, but he had felt out the three and found Lisa, young Emily and even Latasha, young as she was, were serious about the work.  He had no qualms there and thought he might even help them now and then.  True, the influx of so many elect disturbed him.  Some felt off color, but not terribly so, and he knew this was just a temporary thing.  He hoped being around so many good sisters, as they called themselves, it might encourage the off color ones to straighten up.

Heinrich laughed to think of these women all running around like headless chickens, brandishing their weapons, waiting nervously for the main event.  Centuries of experience had taught him to relax and wait, and not to worry so much about weapons.  Weapons could be found.  When the time came, he was his own best weapon, even if he had nothing in his hands.

Heinrich stopped.  He heard a noise by the old gymnasium that stood beside the parade ground.  There were soldiers gathering there—no, young men.  Emily’s ROTC men, and they were getting into the back of a truck.  He lifted his nose and took a big whiff of air.  He decided he must be getting old.  He ran faster than any ordinary man toward the library.

There are in fact three elect in Trenton, NJ.  Emily is a freshman at the university, Latasha is a high school freshman, and Detective Lisa and the Trenton police are having to deal with things at the university that are, to say the least, not normal.  Now, Heinrich, a member of the mysterious council has shown up, along with twenty-six more elect gathered from all over North America.  The zombies have already gone after Latasha’s house (chapter 9).  It is only a matter of time before they are let loose on the university campus.

The Elect, Freshman Year began in November of 2015.  You can begin the story by clicking on the archives button and selecting November of 2015, or just enjoy it from this point…  Every chapter (episode, like a television show) is posted in 4 easily digestible parts over a single week.  So after today, you will find parts 2, 3, and 4 of chapter 10 on T, W, and Th of this week.  Enjoy.  It is free, and Happy Reading.