The travelers stopped early that night, but stayed out on the grass where it would be hard for any group of men to sneak up. The weather was warm, so they let the campfire burn down low, especially since it was a beacon in the night that showed their location for miles. They slept some twenty yards from the fire thinking if the cannibals made an attempt, they would go to the fire, and then they kept a tight watch in the night with at least one set of eyes trained on the burning embers at all times.

Morning came without incident, and everyone relaxed. Breakfast was an enjoyable affair with a lot of the conversation centered mostly on Roland and Boston. Alexis kept quiet that morning, but no one minded. Her one comment to Lincoln when they mounted was, “I hope father is alright.”

“I am sure he is.” Lincoln gave his reassurance and they both looked back, briefly.

It was a pleasant morning, sunshine warm, but not terribly hot. Conversation was sporadic. Lincoln read some more about the time and place they were riding through. Captain Decker and Elder Stow kept a good watch on their flanks, and came in close whenever they came to some trees. It appeared at last they were headed toward the sea and only hoped they would not come up against another cliff or ridge that would prevent them from reaching the beach. What they found was only one thing.

“The Marzalotipan!” Lockhart said it because no one else was paying attention and Elder Stow and Decker were just moving in from the wings.

“Welcome friends. Have you considered the Dilodian silk? Maybe you are thinking of something to replace those projectile weapons. I suppose the beasts of burden are still not for sale. Mind you, I would make an excellent trade for those.”

“Did you get a permit?” Katie asked this time. Elder Stow was busy trying to find something that might be adapted as a charger for his equipment. Decker remained quiet and rifle ready. Alexis was busy eyeing the Dilodian silk, and Roland and Boston were busy as well, eyeing each other. Lincoln, however, noticed something.

“Where did you get the local spears?” His words drew the attention of the others.

“Ah yes.” The Marzalotipan practiced his smile. “A hunting party said they could use a simple handgun to help on the hunt.”

“So you took a half-dozen sticks and stones in trade?” Lincoln was astounded, not to mention he guessed who that party was hunting.

“They had gold and tin. It was unrefined, but in sufficient quantities. And some interesting agate.”

“You need to get a permit to trade,” Katie stuck to the original issue.

“Did you find Wir’a? He is not going to be happy if you are trading without a license,” Lockhart added.

The Marzalotipan looked up. He was a salesman, but a timid creature. “I looked for him as you said. I made the effort but did not find him. How big is a mile?”

“I see you still have the Blueblood canon,” Decker said. He also guessed who the hunters were after and dreaded what kind of weapon they might have gotten their hands on.

“No,” Lincoln said, but he appeared to be talking to Alexis.

“Probably corrode in a thousand years or so,” Elder Stow mumbled.

“Quiet!” Boston shouted and everyone quieted for a moment to look at her as she turned to the Marzalotipan. “Five more miles up the shoreline.” She pointed.

“Ask for Wir’a,” Lockhart said again, and rode down to the beach. The others followed with Lincoln still saying “No” to Alexis. They could not hear what Alexis was saying.

The travelers reached the sand and looked out on morning over the blue of the South Atlantic. The water appeared calm and placid, but they knew at certain times of year, terrible storms could brew there. They dismounted and planned to walk their horses most of the way. Even walking, Lincoln figured they should find Wir’a in time for lunch.

Elder Stow floated up to Lockhart with a word. “Keep together and bring Decker in close. I can set a screen against the poor energy weapons of this day and keep it up for the morning, but it would be better if I did not have to stretch it too far.

Lockhart simply nodded and waved Decker in close. The man was prepared to ride out on the wing again, out among the sand dunes that grew just beyond the tidal pools. He accepted the limitation of his movement to remain behind the Gott-Druk screen, but he rode, or mostly walked on the outside between Lincoln and Boston, and his eyes rarely wavered from the dunes. 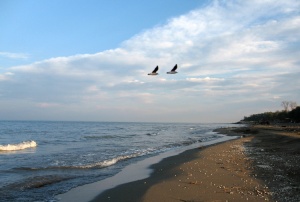 The travelers changed their fairy weave clothes to shorts and thin little shirts as the day heated, like a true day at the beach. Alexis made the required warning about sunburn and handed around some lotion she took out of her medical kit; but to be sure, the travelers had spent so much time by then in a wilderness of one kind or another, they were all about as tanned as they could be, and not likely to burn.

It was a pleasant time on the beach and an easy place to get lost in happy memories of other times and places. Roland and Boston held hands and whispered, and had no eyes for anyone but each other. Lincoln and Alexis seemed to be at peace, and they were not adverse to holding hands themselves. Katie was animated in her conversation at first, and Lockhart was smiling more of late. Katie was very different from the prim and proper Marine Lieutenant they met on the first day. It was like she opened up and once again, or maybe for the first time, became a human being.

Katie talked about how her parents used to take her to the beach every summer. She built sand castles, though never anything as grand as the castle of the Kairos on Avalon. She dreamed of fairies and elves, but never dreamed they were real. She played at soldiers and pirates. “And do you think we might run into some real pirates in our travels?”

“Oh, I hope not,” Lockhart responded. “It is hard enough keeping everyone alive as it is.” He held out his hand. He figured it was the theme for the day. Katie took it without hesitation, but she suddenly became very quiet, and walked most of the time with her eyes turned down, like she was considering her shoes. Lockhart just kept smiling.

Captain Decker and Elder Stow were the only ones paying attention. They were about half-way to their destination when Decker spied some movement in the rocks and trees that spread out beyond the dunes. He understood the cannibals were too far to mount a charge. They had seen what the weapons of the travelers could do, first hand. They had lost several men, and were being wary. Even if they moved some hunters up into the dunes before the travelers came around the corner, there was still enough distance to cut them down if necessary.

Decker verbally nudged Elder Stow and he looked briefly before he turned to his scanner. Decker pulled his rifle and paused. There was not time to see what his eagle vision might show him, but he felt a word was in order.   “Enemy sighted. Everybody be prepared to mount.” 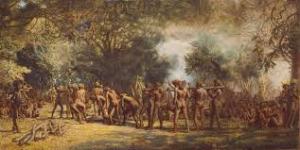 Katie immediately let go of Lockhart’s hand and pulled her binoculars for a quick look before she handed them to Lockhart. She pulled her own rifle while Lockhart unsnapped the holster that held his police special. He left the shotgun holstered. It was no good at distance.

The travelers all stopped moving and looked, Lincoln reaching for the binoculars. They did not have to wait long. A yellowish line of power and fire came from among the rocks and stopped at a line twenty feet from the travelers. Elder Stow handed Lincoln a box and immediately took to the air. He flew toward the source. He had personal screens which would protect him from both yellow fire and primitive spears. The travelers could only watch.

It did not take long for Elder Stow to zero in on the enemy where the man kept firing, trying to penetrate the screen. The sand at the base of the screen began to boil, but it seemed like a person would have more success shooting rubber bands at a brick wall. A moment later, the travelers saw the orange streak of Elder Stow’s weapon, and the enemy fire stopped. Decker mounted. The others followed his lead, except Lincoln, who waited for Alexis to get up so he could carefully hand her Elder Stow’s box. When they were ready to move, Elder Stow was back and they started out at a trot. It was not as fast as some might have liked, but it was faster than the enemy could walk.

Katie spoke up, but softly to Lockhart. “All I can imagine is back in the dark, in their camp, we must have wounded or killed someone dear to the chief, like maybe his wife.”

Lockhart nodded his response. “Or his son or daughter. I was thinking much the same thing. Anyone else would have given up long before now.”