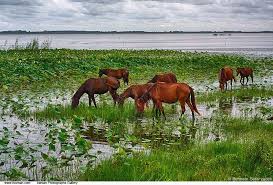 Martok heard the cry from overhead and he dared to look. The flying creature of the witches was a griffin, a magnificent creature, and bigger than he imagined. It was a lion with eagle wings, an eagle head and eagle claws instead of the lion’s front paws. That was how the humans saw it and revered it in stone in the millennia to come. But Martok was not human. He was Bospori, and with his alien eyes, he saw something alien about the creature. He wondered briefly what planet the griffins came from, but then he returned to his work because he had more adjustments to make.

The Griffin swooped down to hover in front of the witches. Its powerful wings blew the thatch off the nearest houses and stirred up a dust storm. Martok had to lean over to protect the exposed internal electrics of the Gott-Druk scanner. It did not hover for long, though, before it started over the houses toward the villagers and the children huddled down on the beach.

“Damn,” Martok breathed and he twisted the Blueblood tube half a rotation. The griffin instantly fell unconscious from the projected feedback, and it crushed a house on its way to the ground. Martok hoped it was not seriously hurt, but he knew he needed a stronger wave to take down the witches. He was afraid if the witches were smart enough to recognize what he did, he might not live long enough to make that happen.

“Move village. Move village.” The witch in the center repeated its programmed speech twice, and if a robot could be said to be angry, this one sounded angry.

“We bring ourselves,” The one on the left had to say something.

“Ourselves, come,” said the one on the right, and it was followed by several rapid explosions and sudden holes in the ground all around where Martok was working. Decker and Katie answered with their rifles. A few bullets penetrated and created sparks, but most merely dented the robot’s metal skin. Arrows and spears did not even do that much, but then Elder Stow stepped out from behind the house where he had taken refuge, and he fired a wide angle shot that took in all three witches.

The two witches on the outside wobbled in the air. They stopped firing briefly. The witch in the center fell to the ground, but it rose back up again before Andovar’s men or the Amazons could get to it.

“It is going after movement,” Major Decker yelled in the momentary lull.

Katie imagined motion detectors and yelled. “Alia, everyone stand still, stay where you are.”

Most of the men and women did not stand still, so the witches started firing again. They fired some kind of pulse from their right hands at the end of stiff right arms. Katie and Decker continued to search for joints and weak spots while people died and the center witch flew over to the back side of the village.

The witch ran straight into Lockhart. Boston was the first to fire, but her Beretta did nothing and Roland pulled her down to shield her with his own body. The witch turned on them, but Lockhart fired his shotgun before the witch could take aim. Unlike Katie and Decker, he did not aim for the robot middle. He shot the hand – the weapon that was wreaking so much havoc. The hand broke off at the wrist and fell to the dirt. It held wires that sparked and sizzled. The witch gave the hand an uncomprehending look, but managed to rise up again before Lockhart could shoot the head.

“I thought we were dead,” Roland admitted.

“No. I came this way to get close up for a shotgun blast. I see I was right. Come on,” Lockhart came to a space between two houses which was right alongside the witches in the square. Before he reached a position to fire, he felt a deep pulse in his chest, and the two witches in the square collapsed.

The one with the missing hand appeared It was going after Martok, but then Elder Stow stepped out again from his hiding spot and fired at the robot head He had turned his weapon back to a narrow beam and turned up the power. The head of the witch vaporized, and the last witch fell in flames.

Iddin-Addad came back when Martok went away. He handed the scanner back to Elder Stow and took out his long knife. He went to all three grounded witches, including the headless one. “They are self-repairing up to a point,” he said to anyone who was listening as he tore the back of the Witch’s dress, opened the back panel and yanked out the power source. “If they can’t repair, they may be designed to self-destruct,” he added the last note more softly.

Men came from all around the village and they were soon followed by the women and children. Most celebrated, but that was blunted some by the four dead men and the number of wounded. Alia lost two women from her troop. Katie and Decker both took a couple of cuts from shattered rocks, but otherwise the travelers were not affected. By chance, neither the monsters nor the witches touched the house that held Alexis, Lincoln and their wounded man. Of course, Alexis now had more wounds to tend to, but Doctor Mishka returned to give her a hand.

“Indo-Aryan,” Katie explained to Lockhart and Boston. “Most of the ones north of here have already pushed into Europe and down into Italy and Greece and up into Scandinavia, pushed by the movement of the Slavic peoples that are more slowly expanding into the west. The ones here are like Cimmerians, and on the other side of the Caspian they are like the Scythians. They are also the same people who eventually move down and take over India.”

“So this is like Hitler’s famous people?” Boston asked.

“In name only,” Katie answered as Boston looked around.

“But I don’t see many blonde hairs or blue eye in them,” she concluded, and then she excused herself to find Roland and make sure that hobgoblin was not making any moves. 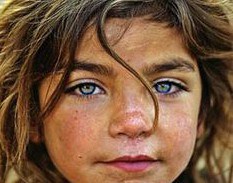 “Sorry,” Katie apologized. “Sometimes I can’t help it. I see things that were not entirely clear, sort of theoretical in graduate school, and now they make perfect sense. I just talk too much.”

“No,” Lockhart waved off her concern. “I was never good at history, at least the details, but I enjoy it when you explain it.”

Katie had to turn her head to the side to look at the village. “And you pay attention,” she said as a smile touched the corners of her lips.

“Yes I do,” Lockhart said, and he thought close, personal attention.