When Flern came to a screeching halt in front of her house, she found her big sister, Thul on the porch sitting out of the sun. “Come and see.” Thul shouted.

“Can’t.” Flern got short with her sister. “Where’s Father?”

“But it is my wedding dress,” Thul said with a bit of a pout.

“Father!” Flern called before she turned to her sister. “I can’t stop right now. Besides, your wedding dress will just make me so jealous I will scream. Father!” Flern ran toward the center of the village and the big council hall while Thul smiled. That was all she really wanted to hear.

“Father.” She saw him across the commons, talking to a stranger, and she ran up to them and rudely interrupted. “Where is the Chief? Where is the sword?” she asked

Father gave her an odd look. “What do you know?” Sometimes Flern knew things she had no way of knowing. Flern shook her head. She got busy catching her breath. “These are just traders.” Father meant to assure her. “They are not something you need to be concerned about.”

“But Vilder said the Chief has a sword that is as sharp as light and hard as stone.”

“Flern.” Father frowned, as the man he had been talking to turned and walked into the council chamber. “We are trying to negotiate right now. You have no business being here and interrupting.” That became pretty much as stern a scolding as her father ever gave. Then he smiled, warmly. “Go find your friends.”

“But.” Flern tried to protest, but Father would not listen. He interrupted with some real thoughts for a change.

“It is bad enough you shoot arrows and have taught all of your young women to ride, but swords need to be left alone.” He found determination in his voice, a sound that Flern almost never heard. “I mean it. A woman’s hands were not made for such things, and you will bring shame on your family if you don’t stop.” Flern flinched. Her father even looked serious and a little perturbed. Maybe something else, like something in the negotiations that got to him, but he did not hesitate to take it out on her, at least as much as was in him. He spun around and went into the chamber and left her standing in the street, wondering what she could do. 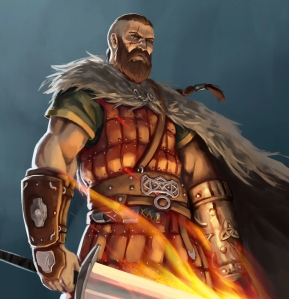 “Is this what you are interested in?” A man came up out of nowhere and held out the most glorious sword that carried the undeniable sheen of bronze. It looked crude, but bronze all the same, and Flern got ecstatic.

“Yes!” Flern’s face beamed, but when she reached out to touch it, the man yanked it away.

“Now, now,” he said, kindly. “You get your own.” Then he smiled down at her and regaled her with his story. “I struggled down the third river and faced terrible trials until I came to the cliff face beside the mountain pass. It was there that I climbed up into the hills to where the pass cut through the mountains and led me to a high plateau. Across that plateau of high hills and deep, wide valleys, I came to the far side of the mountains where I clambered down to safety. It was near the greatest river of all that runs on the far side of the mountains, deep in the south, I found men who have learned to make instruments like this.” He held the sword out again and Flern felt entranced.

“Wait a minute.” Flern shook her head. “Bronze? Where did they get the metal?” She asked the question out loud, or so she thought, though she did not expect to get an answer. She certainly got startled by the answer she got.

“There’s tin in them thar hills,” the man said, and flashed a terrific smile. Flern’s eyes shot to the man’s face. It seemed a good face and she liked it very much, but that sounded too much like something the Storyteller might have said. The man winked, a bit of body language completely unknown in Flern’s culture, but it caused Flern to lose her sense of wonder and take on a more skeptical attitude.

“Are you a good witch or a bad witch?” Flern asked.

“Me? Why, I’m not a witch at all.” He still smiled. He knew the allusion. Flern frowned all the more and then she saw the man’s missing hand.

“Fa…” She started to speak but changed the word. “Tyr.” She reached out for the gold cup where the hand had been. It had to be a recent loss, and Flern felt the tears well up in her own eyes for Tyr’s sake. She could not help it. The same Nameless life that became a raging storm when Wlvn found Eir a prisoner at the center of the universe now felt ready to cry a whole sea of tears. Flern still could not name that life, but she felt certain that it had to be a very emotional lifetime. 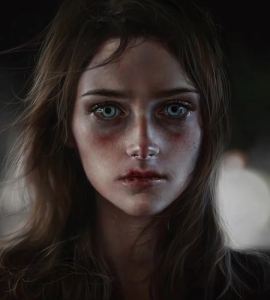 Tyr sheathed the sword to put his good hand on Flern’s shoulder, to comfort her. No doubt, something he had not intended to do. “Your Mother Vrya says you are her son even when you are her daughter. I can almost understand that. I am fine.” And just then, not to say that Tyr, the god of war, did not work things out that way, the rest of Flern’s friends came riding up in a bunch.

Flern felt pressed to ask everything at once. “But bronze. Why here? Why now? What are we to do?”

“Let me show you.” Tyr said, and he took a step back while the gang came up on foot. Even Drud, Bunder and Elluin came with them. Flern looked around. Normally, the village center stayed full of little children, women haggling in the market stalls, wagons plowing through; but right then, no one could be found around the center. All felt still and silent in anticipation. Flern imagined that she might be the only one who noticed; but then she almost missed it when Tyr made a canvas bag appear out of thin air.

“Now boys.” Tyr spoke. “You take these.” He pulled out a copper sword and handed it to Vilder. Fat Fritt got a big, stone ax. Strawhead Trell got a cutter—a piece of seasoned wood with sharp copper pieces around the head which made it like a medieval mace. Gunder got a big hammer, and he looked like the only one big enough to lift it. Everyone else stepped back when Tyr yelled, “Defend yourselves!” He grinned as they tried in earnest, and the boys did well, but the god disarmed them all and broke their weapons to pieces while he hardly put a scratch on his own sword.

“Convinced?” He looked squarely at Flern. He seemed to be speaking to her, personally. In fact, Flern could not be sure if Tyr’s mouth moved, so maybe she only heard the words in her mind. “The Jaccar on the other side have some supernatural help, so I thought this might even the odds a bit.”

“It’s my job.” Tyr said, and Flern remembered again that he was the god of war. Then she knew for certain that Tyr had not moved his lips and she growled, “Grrr.” She became determined to speak out loud, but Tyr merely laughed while the boys put the pieces of their broken weapons back into the bag. They did not seem fazed when Tyr easily lifted the bag and slung it over his shoulder. Not even Kined realized that the bag should have been too heavy to lift.

“But why just one blade?” Flern asked out loud and stared at the god as if daring him to answer her question in any way other than out loud. He laughed again and pointed to the river.

“I told you. You have to get your own. Go down to the third river, to the cliffs, up to the pass and over the mountains, and on the other side you will get to the Danube.” And with that, he turned and walked into the council chamber before anyone could ask anything else. The others were all replaying the battle, wondering at the marvelous sword, and amazed by the skill of the man. They got excited and loud, but Flern had to think. She scrunched up her face against the racket, and then it struck her.

The Jaccar come.  Until then, Happy Reading.