Flern spent most of the day listening to everything that Diogenes, the Princess, the Storyteller and Doctor Mishka had to offer concerning the defense of the village. One of the first things would be to move the women and children up on to the ridge, a place from which they could escape up into the mountains if necessary. A few of the women stayed, but most, even those who wanted or were willing to stay, understood that their first duty was to the children. Of course, the children wanted to stay too, or at least some of the older boys, but for the most part the village elders said no. They said those boys had to watch out for the women and children in case they had to flee. Andrea stayed with Boritz and Moriah stayed with Badl. It seemed hard to tell exactly what Moriah might be thinking, because she seemed anxious for the fighting to start. That felt curious to many; but in truth, Flern understood that Moriah felt anxious for the fighting to be over, and she did not blame her for that. Wlkn volunteered to help the women and children on the ridge, but he got told, absolutely not. He got handed a bow and a hunting knife, both of which he knew how to use perfectly well, and he got told where to stay, and Elleya stayed right there with him.

Around two o’clock, a troop of twenty dwarfs came marching into the village, armed with axes with sharp copper heads. Flern told them that this was not their affair and she only wanted them to stay if they truly wanted to volunteer. “No pressure,” she said.

The chief dwarf looked at her and his first words were a great relief. “Don’t worry,” he said, and Flern relaxed a little. “We had a run-in with some of these ghoulish creatures a few years ago and everyone here is anxious for get backs.”

“Oh, but revenge is not a good thing.”

“Don’t worry.” The dwarf repeated himself with a fatherly tone that crept into his words. “Now, what’s the plan?”

A couple of hours later, Laurel had a question. “But will it work?” Flern knew the elf was not afraid, young as she looked and in elf terms truly was. Of course, she thought Laurel asked about all of their preparations and she could only shrug in response. “No, I mean do you think we can get in and out without getting caught?”

Flern paused before she shrugged again. “You can’t go invisible or immaterial with ghouls like you can with humans, and a glamour won’t fool them for long, either. You don’t have to come.”

“I’m coming.” Laurel said with the sound that it was already a settled matter. “They are fast, but not elf fast. Once I get moving, they won’t be able to catch me.”

“But you are the one they are after. What if they catch you?”

Flern shrugged again. “I’m not a red headed boy. Anyway, the village will probably be saved. It won’t be the worst thing.”

“Except for you.” Laurel generally did not like the idea. 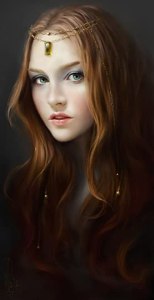 Flern suddenly looked serious. “You didn’t tell anyone our plans?” Laurel shook her head and Flern relaxed. “Good.” Flern felt sure if the others knew they would either try to stop them or insist on going with them, or both.

An hour before sundown, Laurel and Flern went out from the village. They ran to the tree line. Laurel got surprised. Flern kept up, but Laurel said nothing as they moved more slowly and carefully through the woods. Laurel made no sound at all, and Flern made virtually no sound. She generally kept herself an inch or so from the ground and pushed herself along through the trees. When they got close, Laurel stopped. She turned up her nose, and then Flern smelled it, too. It smelled like the ghouls had roasted and eaten the two that she had wounded, maybe killed. Anyway, those ghouls were certainly dead now.

Flern put her finger to her lips and floated high into a tree. She caught a branch and pulled herself along, dancing from tree to tree like a squirrel until she was right over the camp, but well hidden in the branches and leaves. The cooking smelled nauseating from that vantage, wafting up as it did from the campfires below. Flern almost threw up, which would have ruined everything. Then again, she imagined the ghouls might not have noticed, or might have thought of it as manna from heaven. That thought did not help her stomach, so she decided to concentrate on her ears instead. She found it was not like in the movies. She heard no plans about how they were going to attack the village, and only knew they were planning an attack because she heard two in the grass talking about how much they were looking forward to eating some living, human flesh and sucking out the souls.

Flern backed out the way she came in, moving from upper tree branch to upper branch like a confused robin. When she reached the place where she left Laurel, she got miffed. Laurel was nowhere to be found, so she waited, but not for long. She heard where Laurel went before she saw her.

“It’s the elf! I knew I smelled something! Get her!” Laurel came running, and Flern stayed right on her heels. They soon left the ghouls well behind, but they did not stop running until they reached the barricade around the village. In fact, Laurel ran right over the barricade, and though Flern had to use a little flying lift, she followed right behind. Then she needed to breathe, and they were deep, heavy breaths. She might be fast, but that still made a long way to run. Laurel did not have nearly the recovery problem.

“Where did you go? Where were you?” People came running up including Boritz and Badl. Flern waved to Laurel because she could not talk yet. Laurel simply made an announcement.

“Are you crazy?” Badl started to yell at them, but Flern stopped his mouth when she put a hand on his shoulder.

“I was hoping they would go away. We just wanted to be sure.” Flern gasped, and then she felt better.

Two hours later, after the sun had set and before the moon came up, the village streets looked deserted. Several figures moved through the shadows. Several more figures appeared from another direction, and several more from a third place. They moved slowly toward the center of the village where a big open area, like a village square centered around a spring. The spring soon became a little stream that trickled off in the direction of the river. Flern stood completely still, nearly invisible in the darkness, her cape with the black side out, her hood up, her fingers twitching ever so slightly with nervous tension. She waited as long as she could, but then the ghouls spotted her, having perfect night vision. One shouted. Several shouted. But Flern already started rising like the moon, and she concentrated on letting out every ounce of glow Nanna the Moon gave to Wlvn. She felt like a little moon herself, thirty yards above the village, she bathed the square and the houses beyond in a soft but certain light. The ghouls were revealed. The people could see, and at once, arrows shot out from house windows and cracked doorways all around. Perhaps half the ghouls were killed or wounded in those few moments. Then the people came out with

spears, axes, knives and clubs, and they came in threes and fours against each ghoul that still stood beneath the glowing girl. Boritz broke one in the back of the head with his spiked club. He smashed a second in the face, before he picked one up right off the ground and threw it against two more. Those three fell on their backs and became easy targets for the crowding men.

Flern shut her eyes and focused on the glow—float and glow, that was all she had to do. With light, the major advantage of the ghouls got stripped away, and the village had a chance, but screams of death came from every direction, and Flern could not shut her ears. She also could not do anything if a ghoul took a shot at her. She felt vulnerable in her legs, arms and face where she had to be naked to properly glow.

It felt like forever before Flern dared to open her eyes once more. The screaming became subdued, and some people milled about, no doubt wondering what just happened. The blood ran everywhere, and much of it looked like slimy, greenish purple in color, but plenty of it ran red. Flern preferred not to look, so she let her glow diminish as she floated back to the earth. The real moon rose in the late fall sky, and though the sky soon filled with heavy gray clouds moving in from the north, there came significantly more natural light than before. When Flern touched down, she fell to shivering. She had never been so scared in her life, and she could barely keep her head up when Laurel came running up.

“It worked, but barely.” Laurel said.