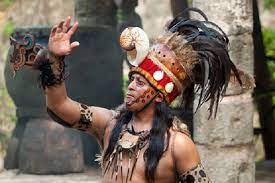 It took them three days to reach Seibal and another day to reach Tayasal.  Cadmael told them this was the most dangerous area and showed them all the roads that went to Caracol.  “Lord Kan II of Caracol turned his army many times against Naranjo, a city in league with the Great Tikal.  Finally, in the last year, he has taken Naranjo away from Tikal and all the cities fear he will now turn on them.”

“The people in Seibal and Tayasal seemed nice, but nervous,” Katie said.  But the smaller towns and villages we came through seemed unafraid.”

Cadmael agreed, and Kaax spoke.  “When the king goes hunting, the monkey laughs but the deer scatter.”

Decker gave it a guess.  “When a city goes on the warpath, they don’t bother with the small towns and villages. They go after the cities that own and control those towns.  But for the bigger cities it is like every man for himself.”

“Every city for itself,” Lincoln corrected.

Lincoln looked at Lockhart’s face and kept his mouth closed.

The following morning, the travelers left Tayasal under escort.  A man named Gabor led twenty men who pledged to take them safely to Tikal.  He and Cadmael did not know each other, but they soon got on friendly, speaking terms.

“And you believe these are messengers of the gods?” Gabor asked.

“If not, they should be,” Cadmael answered.  “I have seen thing and they know things, even future things that should not be spoken.  They told us about the hurricane the day before it arrived.”

Gabor closed his mouth and shook his head.  “It was a bad storm,” he admitted.

When they stopped for lunch, Elder Stow took a long look ahead on his scanner.  He saw a village about an hour away, but something did not look right.  He could not decide what bothered him, so he asked Decker to spy with his eagle totem.  Decker slipped out of the group where he could meditate in relative quiet.  His eagle totem took him almost to the clouds, and when he dove down to the village to give his eagle eyes a good look and he understood what bothered Elder Stow. 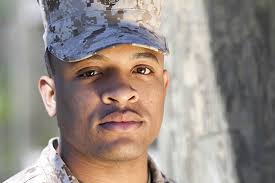 Decker opened his eyes and returned to the group with a word.  “The village ahead is full of soldiers—warriors.  They have the residents rounded up and surrounded in an open area, and they appear to be ransacking the village.  I think gathering foodstuffs.”

“How far away?” Lockhart asked.

“About an hour, if I judge correctly,” Elder Stow said.

“Any way to spy out the village and not be seen?” Lockhart asked.

“Yeah,” Lincoln interrupted.  “I expected this whole area to be deep dark jungle.”

Katie shook her head.  “Most of the jungle has been cut down for slash and burn agriculture.  And they probably have cut two or three times what they plant in a year.  They rotate fields because jungle soil plays out fairly quickly and needs time to renew.”

“Okay,” Lockhart raised his voice to regain everyone’s attention.  “We will get as close as we can and let Elder Stow pull up that hologram thing so we can look before we leap.”

An hour later, Elder Stow brought up an image from his scanner.  It showed Gabor, Cadmael, and the Mayan warriors in red, the travelers and their horses in blue, the residents in the village ahead in green, all bunched up in an open area, and the invading warriors in yellow.  For once, Elder Stow did not say yellow is for danger.

Cadmael pointed to the image and spoke.  “Tikal would not send armed men to a village.  They depend on grain from the village to feed their people.”

Gabor swallowed and said, “Caracol.”  He blinked at the image and explained himself.  “This place belongs to Yaxha, not Tikal.  The army of Caracol may be after Yaxha after Naranjo.”

Or they may be attacking Tikal itself and wanting to secure the land behind them and gather food to feed their army,” Decker suggested.

“Tikal owns Yaxha,” Gabor said.  “But Yaxha may be tempted to switch to Caracol after the taking of their sister city, and that might be enough to bring out Tikal’s men.”

“I would say that is least likely,” Decker countered.

“Most likely, Caracol,” Cadmael said, and they planned what to do.

The travelers mounted up and rode their horses into the village.  Their Mayan guides and escort bunched up behind them.  Nanette and Alexis walked in the rear and led Ghost and the wagon.  Elder Stow payed close attention to his screen device and fiddled with the controls. 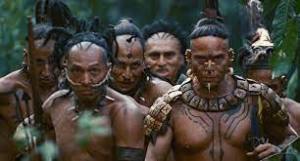 The warriors, and they were about three dozen from Caracol, made a line between the travelers and the village residents.  The line of armed men said stop where you are and go no further without anyone having to say anything.

Lockhart waited until Elder Stow said, “Done.  Ready.”  Then he got down and stepped up in front of his horse.  This time, Katie stayed mounted.  She had her rifle out and ready.

“You have a leader?”  Lockhart, looking like a giant to these men, had to wait while the men of Caracol whispered among themselves.  Finally, one stepped forward and Boston yelled.

“That is not the leader.  That is the one the leader designated to face the giant.”  Of course, her good elf ears heard exactly what the men had been whispering.

The man looked back, and a different man stepped out.  He looked determined and walked up to Lockhart.  Lockhart held his hand up as if to signal that was close enough, but the man kept walking until he bumped his toe and then his face and hands into Elder Stow’s screen and fell back on his rump.  The man rubbed his toe as Lockhart shrugged.

“I am giving you thirty seconds to collect your things and leave this place and leave these people alone.  After that time, I cannot guarantee you will survive.”

A Caracol warrior stepped up from behind the line and threw his spear at Lockhart while Lockhart said slowly, “One—two—three.”  The spear did not fare any better than the Caracol leader.  It bounced off Elder Stow’s screen and they all heard it crack.  Lockhart simply said, “Four—five—six.”

The leader jumped up and started to yell at his people to grab everything they could and go.  Several started toward the villagers, and Lockhart shot off his shotgun.  The thunderous roar and spray of buckshot, mostly that tore up the ground, got everyone’s attention.  A couple of Caracol warriors got pinprick holes in their legs that started bleeding. Several warriors screamed.  Many of the people screamed.  Lockhart was not sure if maybe some of the escort warriors from Tayasal screamed.  But then all went silent, and eyes turned to Lockhart.  He spoke into the silence.

“The people and their food are not your things.  I said collect your things and leave.  “Eleven—twelve—thirteen.”

The warriors from Caracol went off down the road and disappeared by the time Lockhart got to twenty-five.  Elder Stow turned off his screens.  Everyone came up into the village.  Nanette and Alexis went straight to the people to see if any were hurt.  Katie shouldered her rifle and got down to give Lockhart a kiss on the cheek.

“I counted slowly,” he said.

“I’m glad we did not have to kill anyone,” she said.

“Me too,” Decker said, but then answered the surprise on the faces around him by adding, “Believe it or not.”  He reigned back to join Tony in securing the wagon.

Cadmael and the men from Tayasal all wanted to spend the night in the village.  It turned four o’clock which meant they only had a few of hour of daylight left, but the travelers insisted they push on, not that they had any expectation of making it to Tikal before dark, but, as Katie explained, “By morning, the men of Caracol might be able to set up an ambush and we might walk right into it.” 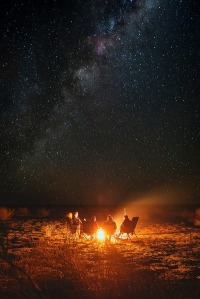 The Mayan dragged their feet, but the travelers did not stop, until around six.  They came to a field left fallow, and they thought it might be a good place to camp.  They had plenty of open space behind them and stopped about six hundred yards short of a jungle area, so they had plenty of space ahead of them as well.  They had no interest in being surprised.  After they all got settled, Elder Stow set his screens around the camp so their night would be undisturbed.  The horses got set free for the night since Elder Stow finally figured out how to set the screen so they could shoot through it if they had to, but the horses and people could not accidentally walk through it and find themselves on the outside.  Of course, nothing but air and most birds could penetrate from the outside.  Boston, Sukki, and Nanette complained that the insects could also penetrate the screens.

Elder Stow shook his head.  “The insects are already inside,” he insisted.

Come the morning, the travelers woke to a surprise.  On the edge of the trees, six hundred yards off, and totally blocking the causeway to Tikal, there stood hundreds, or more likely thousands of Caracol warriors, ready for a fight.

Lincoln complained.  “You try to be nice.  You count nice and slow and let the men go, and they come back with an army.”