Lockhart studied the two armies as the travelers hurried to get out from between them.  “I can’t see any difference between the two groups,” he admitted.  “How do they know who to fight?”

“There are subtle differences,” Katie said.  “But they are both Huns.”  After a minute, she added, “I think the one on Elder Stow’s side is the bigger army.  Of course, that may not matter.  I haven’t seen this kind of battle, and the scholars describe how they think it worked but they really don’t know how it worked.  I can only guess.  The scholars mostly just report the winners and losers.”

After another minute, Boston said a bit too loud.  “What are they waiting for?”

“I don’t know,” Lockhart said, “But we better hurry and get out of the way.”  He hardly had to urge people to hurry.  Even Ghost, the mule, moved as quick as he could, the tension in the air being as thick as it was.

Finally, the travelers squirted out from between the two armies.  Still the armies waited, until the travelers were beyond harm’s way.  Then, all at once, with no discernable sign given, both armies charged each other across the road.  The travelers paused to watch.  It soon looked like a killing free-for-all.

“How do they decide who wins?” Lockhart asked the rhetorical question.

Decker shrugged.  “They will fight for a while, but they can’t keep it up at that level of intensity for long.  Shortly, one side will signal a withdraw, and the other side will also pull back.  They will rest for an hour, or maybe several hours before they form up and go at it again.  They will do this until sundown.  No one fights after dark.  Then one might sneak away in the dark, if they have lost too many men, or feel they are losing the battle.  If both still feel they can win, they will be right back at it at sunrise.”

“The thing is,” Katie said.  “If one side starts to withdraw, because maybe they are losing too many men and they need to regroup, if the other side is not ready to break, or maybe feel they are winning, the withdraw can become a full retreat, and in these days, retreat risks becoming a route, where it’s every man for himself.  In that case, the winning side will give chase, and they usually end up slaughtering the retreating army.” 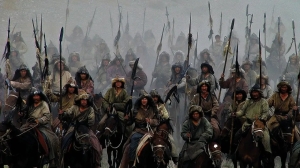 Decker grunted.  “Unless the losing side escapes in the night under the cover of darkness, they will end up being slaughtered, retreat or no retreat.  Some commanders don’t know when to quit.  That can be a good thing, or really stupid, depending.”

“We need to move on,” Lockhart said.  They rode a little up into the pass before Lockhart called for them to get down and walk the horses.  That was when Katie shared a thought.

“I bet the two armies waited for us to get out of the way because the three witches on one side, and Elder Stow and Sukki on the other side put a real fear of God into them.  They waited until we were far enough away so we would not be caught up in the battle.”

Lockhart looked back at his group.  “I suppose that is very possible.”

In the afternoon, the travelers came to a narrow way in the pass.  Shale mountain cliffs pushed in, and the road narrowed.  They discussed stopping and building a camp before entering that strip.  Elder Stow had put away his scanner, but Lincoln had the relevant information in the database.

“The narrow spot is not that long.  It should open up again on the other side and we should be able to find a place to stop where we can watch, but not block the road.”

People went with Lincoln’s suggestion.  Ghost appeared to make it up to the high point without too much trouble, and as the saying suggested, it was all downhill from there.  The rest got down from their horses and planned to walk through, in case they came to a spot that got exceptionally narrow.

They got about half-way into the narrow place before men stood up and came out from behind the rocks.  The travelers found men in front and behind.  They became surrounded with spears.

“Do they want us to pay the toll?” Lincoln asked. He read about that and may have mentioned it to the others a day ago.  He picked up a leather pouch in one of the villages they passed through and filled it with what he imagined was a generous number of coins.

The men said nothing.  They immediately began to strip the travelers of their weapons, including their gun belts. Decker was reluctant to let go of his rife, but he honestly had no choice.  When the men tried to grab the reigns of the horses, Alexis’ horse, Chestnut, and Boston’s horse, Strawberry, balked.  It took a minute to get them settled down.  Ghost refused to move at all.  Tony had to lead the mule by the nose, and he explained to the mule.

“We have to cooperate, or these men might make you into mule stew.” 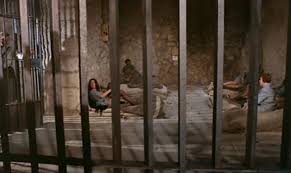 They went to the end of the narrow place and got taken to a hut on the hillside near a shallow cave.  The travelers got pushed into the cave and a simple door got closed across the entrance.  Clearly, the cave had been used for sheep.  Katie pointed to the dry water trough, but the general smell of the place gave it away.

“I hope they take care of Cocoa,” Sukki said of her horse.

“I still have my things,” Elder Stow said.  “But what to do is the question.  There are about eight guards outside the door.”

“I have my wand and stuff in my slip,” Boston said.  “I haven’t done it much, but I could try going insubstantial enough to slip through the door and maybe check on the horses.”

“Sukki could use some of her strength and break the door open,” Nanette was thinking.

“But then what?” Decker asked, and people quieted to think.

Katie finally asked, “Elder Stow, how many of those discs do you have where you can make us all invisible?”

“I have a whole pocket full of multi-purpose discs,” he answered.  “I just have to tune them to the invisible spectrum.”

“Do you have enough for all of us, our horses, Ghost and the wagon?” Alexis asked.

After a moment to calculate, Elder Stow shook his head, “No.”

“Maybe we should see what they want first,” Lockhart said, and people sat down to wait.  They waited for an hour while the sun started toward the horizon.

At last, they peered out between the gate railings and saw a small troop of something like soldiers arrive.  One man got down right away and marched with a swagger to the door.  The guards opened up, and he came inside with two rough looking men with swords drawn flanking him.

“So, these are the travelers,” he said.

“Are you charging a toll to let us move on?” Lincoln asked, and the man laughed in his face.

“Do you use money on Avalon?” he said.  “I never would have imagined that.”  He laughed again at his own thoughts.  “Besides, I have all your money, and everything else already, including all of your guns.”  He shook a finger at them.

“The Masters,” Katie said to identify the man.

“You have been noticed and interfered once too often.  I decided, instead of making more guns and powder for you to come along and blow up, I would just steal your guns.  After using you for target practice, we will make our guns, and model them after the ones you so graciously provided.”

“What do you hope to gain?” Katie asked. 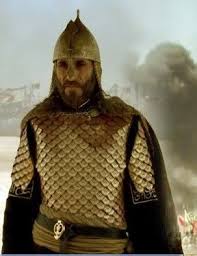 The man paused to look over the travelers.  He did not seem to care if he told them or not.  “We sit at the center of the world between east and west.  The Alchon Huna already did me a favor by tearing down the Gupta in what you call India.  Now, after the Alchon Huna and the Nezak Huna beat themselves to exhaustion. we will move in.  I have men working on the Turks further north.  I expect they will join us for the riches they can gain.  We will invade Sassanid lands to break the back of the New Persians and reestablish the Kushan Empire.  Then we will cross the so-called Persian Gulf to Yemen and drive up the Hejaz to burn Mecca.  After that, only Constantinople far in the west and the Sui Dynasty far in the east will remain to pose a threat.”  He stopped talking and smiled.  “You get the idea.”

“Lord Bobo,” someone called from outside.

The swaggering man and his two guards left, and the gate got tied shut again.  Lockhart frowned and stuck his hand out.

“Elder Stow get out your discs,” he said.

“Boston.  You need to go invisible using one of Elder Stow’s discs, like the rest of us,” Alexis insisted.  “If you go elf invisible, we won’t be able to see you, and we will all need to keep in touch without having to talk.”

“That’s okay,” Boston said.  “Being elf invisible, as you call it, is still very draining.”

Alexis smiled for the girl.  “You’ll get used to it.  You know, being invisible and insubstantial at the same time is how the little spirits of the earth get around and do most of their work in the world.  You will get the hang of it.  Soon enough, it will become the most natural way to be.  Manifesting into a visible, physical form will feel awkward.”

“Not awkward,” Boston said.  “But like a second choice.  That’s what Roland told me.”  She flipped her emotions, as fairies and young elves do, from happy to sad in a blink.  “Roland said being physical still feels natural, and takes no effort, even if it is second choice.”  Boston let a tear fall.  “I miss Roland.”