Ragenfrid moved some men out before dawn to test the hill between the castle around the Paris gate and the edge of town where the diverted Paris Road entered the town.  That was duBois stronghold, and he was not fooled.  He wanted to give fight but was held back as the goblins and a few trolls had some fun.

At the same time, Talliso tested the south end of town where Bedwin waited behind a barricade with his men ready for the fight.  Again, they held back to allow the dark elves a free hand to chase off the men of Anjou.

The third test, still under the cover of darkness, came from LeMans.  He sent fifty men secretly to the small copse of apple trees outside the postern gate, but by the time they arrived, the dawn came upon them.  The goblins and the few trolls there got a few soldiers and scared enough more so they ran.  That turned out fortuitous for the men of LeMans, because Lord Birch, the old fairy lord, had his archers ready to fire as soon as the sun broke the horizon.

Though all three sorties were easily driven back in the dark, Ragenfrid decided to attack in the morning.  “Besides,” he said.  “Those infernal demons dare not come out in daylight.”

He waited until the sun came fully up and in his enemy’s eyes, then he concentrated on the town.  LeMans with two thousand men got sent to the castle wall around the postern door, and their job was to break in, if possible, but if not, to keep the castle defenders busy in a place where they could not concentrate on what happened in the town.

For three days they watched guardsmen walk the castle walls.  They saw all the activity associated with evacuating the town, but they saw no such guardsmen in town.  Margueritte, of course, had her little ones put up glamours to disguise her intentions. The town looked minimally defended, and as is true with all good glamours, Ragenfrid’s men were encouraged to think wrongly about the truth.  They imagined Margueritte pulled the majority of her men inside the castle to defend the walls, which is what they would have done, so they did not look at the town too closely.

As it was, Ragenfrid ignored the Paris gate altogether, and massed two thousand men under Creasy to strike up the Paris Road to town.  He let Talliso with another two thousand rush the hill which petered out at that end of town.  They were to turn the defenders and press them back to the short wall that Ragenfrid knew faced the town.  They had ladders to scale that wall, and groups set to attack the Breton and Paris gates from the inside.  Ragenfrid figured once the gates were open, it would only be a matter of time before the castle fell and all opposition ceased.  He had orders to leave the manor house alone so he could take Rotrude, Margo, Margueritte and the other women and children alive, but realistically, in the heat of battle, he did not know what might happen.

Needless to say, things did not go as Ragenfrid planned.

Talliso ran into a wall of Breton, equal to his numbers.  He almost retreated as soon as he arrived.  Bedwin nearly turned Talliso’s flank, and in the end, they became two armies, just within bowshot, staring at each other across an open space, the Breton taunting, and the men of Anjou frustrated.  Talliso would have to do some serious rearranging to break through into the town.

Creasy found his approach to the city equally blocked.  Though duBois had only three hundred to Creasy’s two thousand, the way Creasy came up the Paris Road made it hard for his superior numbers to have an impact.  Creasy also had to rearrange things and send several companies into the area between the road and the Paris gate.  It spread his men, but soon enough his numbers began to tell and duBois had to slowly pull back.

LeMans came up to the corner of the castle where the little postern door looked inviting, and the small group of apple trees appeared to give some cover against any arrow fire from the walls.  His men had big ladders, and a battering ram to pound the door open.  He actually thought he might breach the defenses, but the castle shape appeared deceptive.

West of the door, the wall ran a short way to the completed tower that had long stood near the manor house, where the workmen and Redux the old blacksmith lived.  There, the wall turned ninety degrees and marched down the hill to the farm field before it turned again due west at a half-finished tower.  That stretch of wall sat within bowshot of the back door, and the tower gave a strong redoubt against any enemy who might make it up to the top of the wall with ladders and ropes.  The unfinished wall in that place stood nine feet tall, at the point where Ronan got ready to build an enclosed inner hallway.  Ropes and ladders were going to be the only way up, if LeMans wanted to test it. 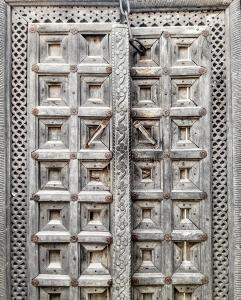 East of the door, the wall curved out until it met another, unfinished tower.  Inside the castle, that curve allowed for a space behind the manor house and beside the kitchen where a great vegetable garden could grow.  Though not ideal for a garden, being on the north side and behind the manor house which would block some of the sun, Margueritte had been assured it would suffice for vegetables.  On the outside, the curve in the wall allowed another group of archers to draw a bead on whoever might approach the gate and being able to shoot at an enemy from both sides as well as from the front made for a withering fire of arrows. LeMans found this out, too late.

Childemund had thirty men on the door itself, and the oak in that door, being little one designed, proved far thicker and stronger than LeMans imagined.  His tree trunk of a battering ram did not even shake it, and they did not get many whacks before they had to retreat.  They left a dozen dead, being hit, as they felt, from all sides.  Heurst had his kobold archers on the wall section that dropped down to the field.  Ringwald had his brownies on the curve in the wall.  Childemund’s men cheered when LeMans retreated to the trees, which were, in fact, apple trees in full bloom

Birch had his hands full on the front wall facing the enemy.  Fortunately, Ronan started building the section in the front that would eventually make a six-foot arch for the hallway.  What they had was three feet of extra wall on the front quarter, with regular spaces where the arrow slits would be built.  Birch and his fairies had to be in their big size to fire arrows on the enemy, but the three-foot sections allowed them to fire from the opening and curl back for protection.

“You should build evenly spaced sections like that at the top of the wall when the wall is finished,” Elsbeth said.  The women had gone up to the top of the manor house to watch.  Margueritte had built a small third story room off the corner of the servant’s room where the ladies in waiting, as Margueritte called them, lived in dormitory conditions.  She put a flat roof on top of the third-floor room where people could go and get sun, or see the view over the walls, or take in the stars at night.  Right then, Margo, Elsbeth, Margueritte, Calista and Melanie were watching, and well out of bow range.  Rotrude and Jennifer preferred to stay underground with the dwarf wives and the children.  Neither wanted anything to do with war.

“I think the wall is going to be too big for this tower to see over,” Margo said.  “When it is finished, I mean.”

Margueritte sipped her tea.  “I know.  I was thinking of adding a fourth room, maybe with open arches and a bell, like a church bell tower, and another flat roof on top of that.  what do you think?”  Margueritte felt nervous.  She again wondered how Greta managed to watch everything with such calm.  She decided Greta was fine until she got in the middle of things.  Then she panicked.  She did not do well in Panic situations.  Margueritte, quite to the contrary, did well when she felt part of something.  She had good instincts and good reflexes.  But just sitting and watching got nerve wracking. 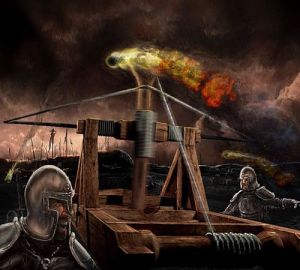 “What is that?” Elsbeth noticed.  It looked like dots in the distance that rapidly got bigger.

“Shit!” Margueritte swore.  “Down in, now.  We have to get underground.”   A dozen rocks the size of cannon balls crashed into the house and courtyard below.  The roof of the house got three big holes, and down below, the women and few men they brought in from LeMans’ camp on the farm field screamed in panic.  People got hurt and one or two maybe got killed.

While Calista helped Margo and Elsbeth down the hatch, Margueritte leaned over the railing and shouted, knowing the gnomes would hear her despite the noise and screaming.  “Grimly, Pipes, Catspaw.  Get your friends and get these women and men out the barn gate and into the woods for their own safety.  Hurry.”  Then it was her turn to get down the hatch.