The castle gate swung open, and three wagons full of barrels of black powder came in.  It was near suppertime, but the men would not eat or rest until all the gunpowder got stored in the castle barracks room that had been designated the powder room.  It would be guarded, not the least to be sure no fire got close enough to set anything off.

Up in the great hall, the Saxons Odacer and Harwic the blade argued.  The other Germans in the room, both at the table waiting for supper, and standing by the doors, guarding the room, knew better than to open their mouths.

“I tell you, it is perfect, ironic,” Odacer said.  “This is the very fort where all that Pendragon crap got started.  It is fitting that New Saxony should begin here.”

“You won’t think it is so perfect if they bring the army down from Caerleon,” Harwic countered.  “We could have built our forces in the safe haven of the south Saxon shore and had a good port from which to overrun the continent.”

“Bah.  You worry.  Besides, we will not leave enemies at our back.  We must control this island before we extend our empire.  We have the rifles, the same Trajan used to conquer Mesopotamia.  Once the men are trained, we will crush the whole world and make everyone slaves to the new order, rule by the New Saxons.”

“We do not have rifles,” Harwic countered.  “We have smooth-bore muskets, basically muzzle-loaded matchlocks.”

Odacer did not seem bothered by that.  “The design will improve as we improve the equipment to make them.”

“But what if they bring the army from Caerleon before we are ready?” Harwic asked, seemingly stuck on that thought.

“So?”  Odacer scoffed.  “We have this lovely castle to defend.  More men are coming every day to join us, while the fools in Caerleon think we are engaged in peace talks.  And even if they figure it out, we have hostages.  We have Arthur and the Kairos, the King of Dumnonia, and the women to ensure their cooperation.”  He paused while people brought in food and laid it out on the table.  Then he added, “You worry too much.  Tomorrow, we will begin training the men and use the guards from this castle for target practice.”

The wraith appeared in the hall, and everyone looked.  She felt pleased to see more than one turn away and vomit from her appearance.  She spoke.  “The powder is here.  Kill the Kairos.”

“Now, wait a minute,” Harwic stood.  Odacer shriveled in the face of the wraith.  “You said your chief desire is to kill the travelers, and the travelers have guns from the future.  I appreciate your help in taking this castle from the inside, and I know you did it because we also have guns, not out of altruism.  But our men need to be trained to use those guns if you wish us to kill your travelers.  Meantime, we are vulnerable until our men are trained.  If the British send an army before we are ready, we will need to keep the ones in the dungeon as hostages.”

“But the Kairos is too dangerous to be allowed to live,” the wraith yelled.

“Dangerous to you, maybe,” Harwic responded.  “But to us, he is just a man.  We will kill him when we are ready, not before.”

The wraith screamed, a sound to frighten the strongest of men.  She raced up to one of the guards and sucked the life out of him, slowly.  Her scream got replaced by the scream of the man, which sounded even more frightening to the listeners.  She left a husk of shriveled flesh that collapsed to the floor, and she flew to the table.  Men ran from their chairs, except Odacer, who appeared frozen in place.  She touched a roasted pigeon with her finger and sucked all the moisture and life from the flesh, leaving an empty carcass where even the bones cracked, being emptied of their marrow.

“See that you kill him,” the wraith said, as she licked her finger and vanished, pleased to notice that more men around the room vomited.

Odacer finally pushed his chair back from the table.  “I lost my appetite.”

Down in the dungeon, Gerraint woke and tried to sit up.  He got as far as his elbows before he collapsed back down to his back.  Everyone rushed to his side, but only his daughter and squire said anything at first.

“We didn’t know if you were going to make it,” Bedivere said.

People waited while Gerraint managed to lift his hand and brush the hair from his little girl’s face.  He tried to smile for her, but he was not sure if his puffy lips and face actually managed it.  He turned to Enid but spoke to Bedivere.  His words came out slurred, and soft, but understandable.

“Squire Bedivere.  Ye of little faith.”  He spoke to Enid.  “I don’t think any bones are broken.  I may have a couple of cracked ribs.”

Enid quickly lifted her hands from his chest, as Gwynyvar spoke.  “Bedivere is full grown.  He hasn’t been your squire for many years.”  She may have wondered if the torture addled his brains. 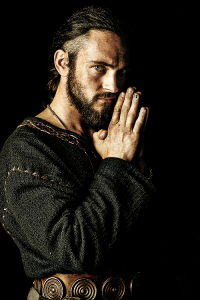 Gerraint smiled, better that time.  “Once a squire, always a squire,” he said.

“Master.  Your Majesty.  Uncle.” Bedivere acknowledged as much.

“So, where do we stand?” Gerraint asked.  He wanted to sit up but could not manage it.

Arthur spoke.  “I am working on a way to get us out of here, or barring that, to get word to Caerleon to call up the rapid deployment force.  Even a company of RDF might be enough to get us out of this predicament.”

“Might get us killed,” Enid objected, and Gwynyvar agreed.

“I’ll see what I can do,” Gerraint said, but Arthur cut him off.

“You are not in any condition to do anything right now except heal.  Enid said her handmaids, Belle and Coppertone managed to escape the fort, but I am not sure there is much hope in handmaids.”

“More than you know,” Gerraint whispered and closed his eyes.  He knew Belle was a house elf, and Coppertone was a Cornish pixie.  Who knew what forces they might raise?  Belle in particular was sensible enough.  Hopefully she would go directly to Percival in the nearby midlands, or maybe Tristam at Tintangle in the other direction.  He slept again.

Having said good-bye to Brennan, the travelers moved one day through a mix of farm fields and wilderness.  They only saw a few people, and those mostly from a distance.  In the morning, Boston suggested they were only a day away from the Kairos.

“And an easy day at that,” she said, as she and Sukki rode out to the point to see if the way was clear.  Lockhart and Katie watched them race.

Tony and Nanette had taken to riding together when Elder Stow and Decker moved out on the wings.  Lincoln drove the wagon and spent most of the time complaining.  “These old Roman roads have not been well kept in some places.  Poor Ghost has had to really work to keep us moving.  I’m surprised we haven’t thrown a wheel, or worse, busted an axel on these roads.”

Tony leaned back from where he rode in front of the mule.  “I could drive if you don’t feel comfortable driving.”

Lincoln shook his head and spoke up.  “You drove most of the way through the mountains.  I can take my turn.”  He grumbled softly, and Alexis beside him grinned and gave him a brief hug.

Boston and Sukki did not get far before they found two odd looking men who blocked the road.  Sukki pulled up and looked at Boston.  Boston saw right through the glamour of humanity.

“Lockhart,” she shouted back, and could make herself heard even over that distance.  “Boss, we got dwarfs.”  She turned and spoke to the two in the road.  “You might as well take off your glamour.  It doesn’t matter to us.”

“Dwarfs?” Sukki asked.  She could not see it.  She only saw two exceptionally grubby, bearded men.  But one, and then the other removed their glamours of humanity to stand in their natural, fully bearded form.

“You will notice, the dirt and grubbiness are natural, not part of the illusion of humanity,” Boston said and Sukki covered her grin.

One dwarf growled and got a tight grip on his axe.  The other put his hand out to keep his fellow from doing something stupid, and he spoke.  “Name’s Chief Bogus.  You will have to forgive Piebucket here.  He doesn’t like elves much.”

“We know, Princess,” Bogus said, and gave a slight bow.  Piebucket lowered his axe, but he still growled.

“What’s up?” Lockhart asked, as he and Katie rode up.  The others came along more slowly with the wagon, while Decker and Elder Stow moved in from the wings.

“Don’t know,” Boston said and turned to Bogus to explain.

Bogus nodded and looked at the road.  “You are headed to the Lord at Cadbury Fort.  Well, in an admirable bit of trickery, the Saxons have taken the fort.  The village is deserted, but right now, they got the Lord and his lady, and their baby girl with the Pendragon, Gwynyvar and Squire Bedivere in the dungeon cell beneath the great hall.  And the Lord has been tortured.”  Bogus shook his head, and Piebucket gripped his axe tight again, and growled.

“How can we get them out?” Boston asked Lockhart, some desperation creeping into her voice.

“Well, first you need to wait for reinforcements to get here,” Bogus said, before Lockhart could answer.  “There is a hundred coming down from the forts at Caerleon and Caerdyf.  They may pick up a few more on the way.  There’s eighty coming with Percival from the Midlands, and another thirty from around Swindon will join them, compliments of old, bed-ridden Bedwyr.  There’s about seventy coming up from Dorset and the British shore.  Admiral Thomas and his brother Gwillim are bringing them.  Both are Knights of the Round Table. And there’s around a hundred and thirty coming from the west.  Tristam is leading the men from Tintangle and Devon.  The Lord’s own son, Peter, is bringing the rest from Cornwall.”

“Sudden notice,” Bogus nudged his fellow dwarf.  “As soon as they heard, they grabbed those they could and came on.”

“These powerful folks might help too,” Bogus said.  “If you treat them right and stop growling at the elf.”

Piebucket tipped his hat and did his best to put on a smile, doofy as it was.  For once, Boston did not burst with laughter.

“I thank you dwarfs for your help and invitation,” she said.  “We will gladly help.  After all, he is my Lord, too.”

The others had caught up by then, so Lockhart did not have to yell too loud.  “Lunch.”

“We will be near,” Bogus said, and the two dwarfs vanished into the nearby woods.  With that, Lockhart took Boston aside.

“That is not your decision to make,” he said.  “I used to yell at others for getting us entangled in things that are none of our business.”  He let her stew for a moment, until she looked down and worried her hands.  “In this case, I agree with you.  Katie would never forgive me if we left without seeing Arthur and his Knights of the Round Table.  Guinevere is just icing on that cake.”

Boston smiled again.  “Gwynyvar,” she corrected him, and then hugged him.  He was the best boss, ever.