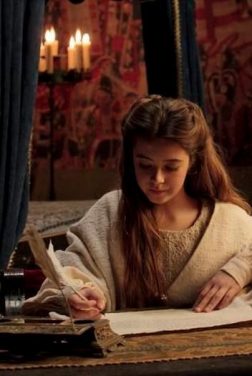 Once again, let me say how sorry I was not to be awake and aware of your leaving.  There are so many things I wish I could have told you, but now it will all have to wait until you return.  I worry about you at war, but I know you had to go, and that Charles needs you.  I worry about Tomberlain as well.  He has neither your skill nor experience and I hope he is not annoying you and getting in the way too much.  (I wrote that for Tomberlain).

I was told you were concerned that I get my medicine as instructed.  You know Father.  Mother has often said he would lose his sword if she was not there to point to his side.  Fortunately, Mother made sure I got every last drop, and I am much better now, you might say nearly well.  Mother says I am still too skinny, but I am really just being careful and trying to eat right and a good diet as everyone should.

Once again, Goldenrod was full of “newsy,” but it sounded much like the last time.  I’m afraid farm life does not change much.  It has been this way for hundreds of years and it will likely continue for hundreds more.   Help with the calving and the baby lambs, hoe the garden and pluck the weeds, sort the potatoes and try not to laugh too much.  I miss you.

Lady Jennifer had a baby girl.  Poor Father Aden fretted the whole last month, but she did very well, and Mother and I were right there to help all the way.  I am so happy for them both.  Oh, and Elsbeth is working very hard thinking of ways to ignore poor Owien.  Funny, though, Owien has been too busy with his duties of late to notice much, and that infuriates Elsbeth, so there is some entertainment.  Speaking of which, Thomas of Evandell, the king’s bard has been here several times.  He says he has just come to check on my condition, and I thank him kindly, but I suspect there is more to it.  I feel as if something is going on among the Breton, and I do not feel it is good, whatever it is.  Father says Baron Bernard has been allowed to go home to Paris to spend his last days in a comfortable home and in the company of friends.  I am glad for that, but it leaves terrible holes in the mark, now north and south.  Father has written to the king about it, but nothing has happened thus far.  I was thinking you might talk to Charles.  Father is a great man to do his duty, but I do not know if he can hold the border and keep the peace alone.  He is rather gray, you know.  Mother calls him distinguished, but I know he is older.  It seems to me he does not jump as he once did, if you know what I mean.  I was thinking younger men in the north and perhaps the baron’s son, Michael, in the south should come while Father is still able to teach them their duty.  Ask Charles if this makes sense, if you don’t mind.

Roland, when will I see you again?  Please bring Tomberlain home safe someday and then you could stay a while for once.  You would be most welcome.  Meanwhile, I will write again.  I would write the moment something changed or something exciting happened, but alas, if I waited for some excitement, I fear I would never write again.  Perhaps I will think of something worth telling by tomorrow.  The Lord keep you.

Margueritte thought of her days as dull, dull, dull.  One thing she learned was how to prod the sheep along with a little electrical jolt.  She practiced because Puppy, now full grown, got as lazy as Maven.  Goldenrod came to visit when she could, but she mostly stayed with Elsbeth.  Margueritte sighed.  She got bored, bored, bored, and because of that, she talked to her puppy as often as not.

“So Gerraint went by the Tor to Tara, and that was exciting.  And he found Bridget there, though I do think he was a little hard on her.  But then they went to Avalon of the Apples.  It was not Avalon itself, mind you, not where Lady Alice lives, but it was connected in a way.  Oh, but then Festuscato faced the werewolf, the wolf-hag, and that was very scary, especially when that Abraxas showed up.  The sky turned dark and there was lightning and all.  I noticed, even if Nameless ignored it.”

Puppy looked at her with eyes which asked if she was through yet.  Margueritte sighed again.  “Even the gypsies have left for Aquitaine, maybe even Spain.  There is nothing here but sheep and Latin, and you, Puppy.”  She smiled and patted the dog’s head.  His tail wagged a little in response.  He was content to be petted, as long as he did not have to otherwise move.  “Sorry.”  Margueritte said at last.  “But it is time to go home.”  She got up, so Puppy got up.  Puppy did not mind going home.  He helped gather the sheep, and they drove them down into the hollow and toward the barn.

When she arrived home, Margueritte found horses in the triangle.  Chief Brian and her father were arguing.

“No.  It will only be for a few days,” Brian insisted.  “The king is traveling to all the towns.”

“But my serfs should not be needed.  There are no troublemakers among them, and the farm will hardly be able to function without their labor,” Barth insisted.

“Most remain subject to the king, and the census is part of it,” Brian said.  “And it will only be a few days.  Now that Finnian McVey is gone.”

“A-ha!”  Barth interrupted.  “That at least is a good thing, though the man should have been boiled in oil.”

“Bartholomew!”  Lady Brianna scolded him.  “You have said the Breton needed to make some changes in the way they do things.”

“The king’s system is very inefficient and unproductive.”  Lord Barth nodded.  “I remember saying it, but why interfere with something that is working well?  We are efficient and organized, provided the work does not stop for a week.”  He leaned into Brian’s face for the last comment.

“They remain the king’s subjects.”  Brian said, not in the least intimidated.  “Attendance is required.”

Margueritte left.  She heard enough.  She thought a trip to the barn was in order, but when she arrived, she found trouble there as well.

“Leave him alone!”  Elsbeth yelled and stood in front of the ladder to the hay loft.

“Come down, boy,” Roan shouted up.  Morgan simply stood by the big barn door and looked stupid and mean.

Morgan moved toward the ladder, but Elsbeth threw her back to the ladder and wrapped her arms behind to clutch the wood and block the way.

“Move, girl,” Roan said.  He reached out, pulled Elsbeth roughly from her place and threw her to the ground. Margueritte’s hands went up almost without a thought, and Roan felt the electrical sting.  It sent him to his knees.  Morgan turned on Margueritte to grab her, but the charge still 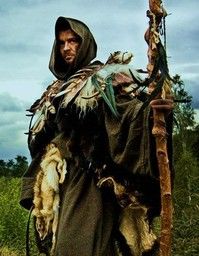 flowed through her blood, and Morgan snapped back and fell like a man struck with a sudden electrical shock.  The thing Marguerite noticed, however, was the look in Morgan’s eyes.  Her fool was missing.  His eyes stared blankly like one under a spell.

“Leave off.”  Canto the druid came to the door.

“But the boy,” Roan protested.

Canto looked up at the boy who stood at the top of the ladder brandishing a knife.  “He’s been too tainted by the Franks,” Canto said.  “He is of no consequence.  Let him be.  It is time to move.”