“In the Hay.”  Margueritte and the short man spoke together.

“It will have to do,” the short man said

“I will cover you,” Elsbeth volunteered.

“Thanks,” the young man said.

Margueritte moved quick and then she helped Elsbeth while the short man kept saying to move further back because a sword could poke as well as a fork.

There were riders coming into the triangle.

“M’lady.  I got all but the tails.”  Grimly said hurriedly, having caught the excitement in the air.

“Margueritte!”  Elsbeth fretted and put her hand to her cheek.

“Goldenrod.”  Margueritte did not hesitate and commanded the Fairy’s attendance.  Goldenrod appeared out of nowhere and flitted around once to orient herself before she curtsied.

“But what should I do?”  Elsbeth looked flustered.

“You pick up your mess in the doorway and try to save a couple of eggs,” Margueritte said, to bring her sister back down to earth.  “Nothing more natural than you having to pick up the mess you made.”

“Humph!”  Elsbeth grumped but got a basket and got to her knees.

The last of the horses seemed to have stopped and a man shouted.  “Check the house, the tower, the barn.  Look for signs.  Look for horses, hard ridden.”  Margueritte stepped out and there appeared to be two dozen soldiers in the center by the oak with at least one lightly armed but well-dressed Lord among them.

“Can I help you?”  Margueritte spoke very loudly to gain everyone’s attention.

The well-dressed lord whipped around to face her.  “Whose place is this?”

“Lord Bartholomew, Victor in Brittany and Count of the Breton Mark, and I am his Daughter, the Lady Margueritte.”  She continued to speak loudly.  Maven and Marta were already at the front door and Lolly stood between them, gently tapping her cooking spoon in the palm of her hand.

“You’re not coming in here.”  Maven muttered with enough determination to make the soldiers think.

Likewise, Redux, his apprentice Graham and Luckless the dwarf blocked the path to the tower.  The big blacksmith and his companions were enough, at least, to cause the soldiers to pause and await orders.

Margueritte spoke quickly into the developing silence.  “I would not recommend invading my father’s house, uninvited.”  Then she smiled for the Lord.  “But perhaps I can answer any questions you might have.”  She wiped her hands clean on her apron as a sign of casualness and friendly attention.

The lord assessed things quickly and decided some questions might not hurt.  “Two riders were ahead of us.  Have you seen them?” 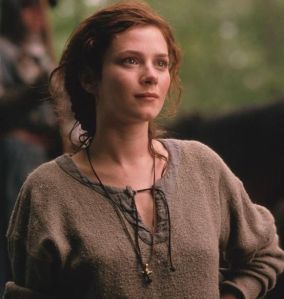 “I heard riders.  There may have been two,” Margueritte said, sweetly.  “My sister Elsbeth and I have been busy in the barn.  Perhaps they have ridden to Vergenville hoping to gain the village before dark.”  She pointed down the road.  “There is an inn there and if they believe they have lost you, they may stop to rest and refresh themselves.”  She smiled again.

“And the priest,” the lord was thinking out loud.

“Father Aden is in the chapel, if you wish to see him,” she suggested, in all innocence.

“No.  This one came from Rome.  His name is Father Stephano.  Do you know him?  Do you know where he can be found?”

“Yes.”  Margueritte sounded hopeful.  “Father Stephano was here three days before he moved on.  As to where he may be, I would inquire of the king.  I would believe if the Pope sent him all the way from Rome, it must have been to the king’s court, don’t you think?  If he could turn King Urbon to the Lord, the rest of the country would follow, no?”  She smiled again, and then looked serious.  “I am sorry, though, the king’s court is much further away than Vergenville, but then anyone going there would have to come back through Vergenville eventually, wouldn’t they?”

“My Lord.”  An older man spoke up, one near him who was also still on horseback.  He spoke in Latin supposing to disguise his comment.  “This wench knows nothing.  Let us search so we may find them.”

“Quiet DuBarry.  Let me think.  What would Charles do?  Take refuge in an outland county?  Appeal for refuge from King Urbon?  Or hopelessly search for a Roman priest from among a thousand villages of the Breton?

“Appeal to the king?”  Margueritte guessed, in Latin.  “You may tell the rude man I understand more than he thinks.  I will overlook the word, wench, as one spoken by an ignorant fool, unless, of course, he believes the word true, at which point he should say so to my father who will be glad to point out his error with the point of his sword.”

The man nearly rose out of his seat, but the head lord held him down with a wave and smiled, and a nasty looking smile it was.  He returned to the Frankish tongue.  “Vergenville.”  He pointed down the road.

“Vergen to the Breton.  You must pass the road to the southlands and the road that runs south to the coast.  Keep straight on through the woods and you will find it.”  She said, with just the right amount of shy for her age.  “And between us, I hope you catch them.  They must be terrible men

to be pursued by such a noble lord as yourself.  I am glad such men did not stop here.  I would be very afraid.”

The lord scrutinized Margueritte, and though she stood in a truly submissive pose and had her eyes lowered so he could not see into them, he came to a conclusion all the same.  “I don’t suppose you are afraid of anything,” he said.

“Bernard,” he shouted.  “Take six men.  Search the house, the tower, the barn and the fields.”  He paused for one last look at Margueritte.  “With the lord’s permission, of course.  The rest of us ride.”  Most of the men mounted and they were off to Vergenville.