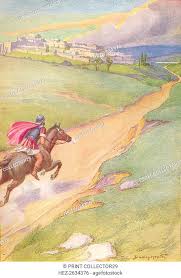 Within the week, letters had been sent by the swiftest couriers to all concerned in the four corners of the realm, to keep a sharp watch out for certain men.  Once that was done, there was a waiting game until word came back.

It did not take long before word came from land’s end, and what remained of Lyoness, that the Welshmen, Kvendelig, Gwarhyr and Menw, had taken ship for Amorica, accompanied by Lionel.  They were ostensibly going to visit Howel, now king of Amorica since his father Hoel had passed away, but Gerraint knew better.

With that, Gerraint was able to take Enid home.  They crossed on the ferry early in June and delighted in the weather.

“I will be so glad to see Guimier,” Enid admitted.

“You are going to spoil that poor child,” Gerraint said.

Gerraint nodded.  “Should have given me a daughter sooner.  Or we could have another and spread the wealth.”

Enid laughed and smacked his arm.  “Bite your tongue,” she said.  “If three is four as you say, that makes my forty-two years fifty-six in your Storyteller’s day, and not inclined to go through that again.  Guimier nearly killed me.”

“Just a thought.”  Gerraint never stopped smiling.  He took her up in his arms and she eagerly loved him.

“God, I will miss you.”  She laid her head on his chest and let a few quiet tears fall.

When they reached home and little Guimier, Gerraint had a hard time keeping his mind on the task.  The month was lovely for picnics and quiet times at the beach.  Peace was a wonderful thing, and Gerraint felt more certain than ever that at his age, his adventures ought to be over.  All the same, he tore himself away, and as a result, he found his time at home seemed all too short.  It did not take long to gather what they needed and prepare to sail across the channel.  The horses gave them a little trouble, but then horses generally did.  Once loaded and ready, however, all that remained were the good-byes and last hugs.

“As long as there is breath in me,” Gerraint responded.

“Get up there.”  Uwaine shouted at the last horse while Bedivere tugged from the other end.  Gerraint looked up and laughed.  He admitted that Bedivere was more Uwaine’s squire than his own, but for appearance sake, his sister Cordella was too much of a snob to have her son squire to less than a king.

“Try coaxing!”  Gerraint shouted the loudest to be heard.  The men stopped and he had to repeat himself.  “Try the carrot instead of the stick.”  Uwaine frowned and Bedivere went back to his pulling.  They ignored Gerraint’s suggestion completely.  “So much for being king.”  Gerraint shrugged.

Enid smiled at that as well.  “Go on,” she said, before Guimier starts crying again.  Gerraint hugged his girls and went, reluctant adventurer that he was.  Guimier waved the whole time until they were out of sight and Geraint imagined she was still waving as the afternoon wore on.

The channel seemed calm enough for June.  There were no clouds on the horizon, but then, Gerraint thought, this is not exactly D-Day, is it?

“Where do you think they will be?”  Bedivere asked as he leaned on the railing.  Uwaine stayed busy throwing up.

Gerraint shrugged.  “We go see Howel first.  You must always pay respects to the king of the country first before anything else.”

“But I was thinking,” Bedivere said.  “What if Howel is in on it all?  What if Lionel is in too?”

“Why?”  Gerraint asked to get his squire to think it through.  “Why should Amorica turn against Britain just because Hoel is dead and Howel is king?  They have been our good friends since Arthur gained the crown, and Howel rode with us many times into battle.  Besides, he has the sons of Claudus on his border and their revived Roman ideas, plus the Franks pushing in hard from the East.  It looks to me like Howel may need our help soon enough.  Why would he support the idea of bringing us to civil war?  It would seem to me that would be cutting off his nose, so to speak.”

“Yes,” Bedivere said.  “I see all that.  But…”  Something bumped the boat from beneath.  Gerraint had to grab Uwaine to keep him from falling overboard.

“Get that sail up.”  The Captain shouted.  Sailors began to scurry around the deck and some of them looked frightened.

“Beg pardon, Majesty, but keep out of the way!”  The mate was not polite about it.

“Bring her about,” the Captain commanded.  “Straight for the shallows.”  They were driving the ship with every scrap of sail they could hoist.  The bump came again.  One sailor screamed.

“Buckle up,” Gerraint said.  He stepped aside when no one was looking.  He called his armor out of its’ resting place in the Second Heavens.  His comfortable clothes vanished and the armor replaced them in the same instant.  Immediately, he drew his sword which was sometimes called the sword of the gods and which he called “Wyrd,” which means, fate.  It was the last gift of Hephaestus to King Bodanagus of the Nervi before the dissolution in the time of the gods.

The bump came a third time, and it felt as if something was trying to hold the ship in the deep.  The wood boards creaked and tried to pull apart.  Several nails popped and Uwaine could only imagine it was leaking down below.  The sailor screamed again, only this time for good reason.  A tentacle came crashing down on the foredeck and by chance, grabbed the man by the leg.

The mate was a good shot with the long fish hook.  He pinned the tentacle to the deck and the man became able to pull free, but he did a lot of screaming and a lot of struggle in the process.

“Not a good idea.”  Gerraint shouted and after stumbling across the deck, he cut the tentacle off where it was pinned so it could slip back into the water.  Bedivere and Uwaine had their swords out by then and they backed away toward the center of the ship.  Bedivere’s eyes in particular were big.

‘Look out!”  Someone shouted as the ship jerked and the center mast snapped at the rigging.  Something started trying to pull the ship apart.  The ship stretched, or bulged out at the sides, but thus far held together.  The ropes whipped in the wind for a couple of frightening seconds, nearly knocked one sailor overboard and thumped another in the chest, knocking him unconscious.  Then the horrific cracking started again as, in slow motion, the mast broke at the deck and fell over across the front of the boat.  They were dead in the water, and whatever it was, it had them in its’ terrible grasp.

“Another!”  Someone shouted, as a tentacle came up over the railing on the far side of the boat.  It slapped against the deck and began to slither like a snake, looking for something soft to grab.  Gerraint counted suction cups as Uwaine and Bedivere slashed at the tentacle from opposite sides.  It reacted by whipping worse than the ropes for a second and just missed slapping Bedivere in the face before it pulled slowly back into the water.

“Good Lord!”  The Captain swore.  “Damn thing’s twice the size of the ship!”    He, too, had been counting the cups and judging their size according to what little could be seen.  “At least.”

“What’s it doing in the channel?”  The mate shouted, but all the Captain could do was shrug as he and a few others struggled to get up some kind of sail.  They heard a crunching sound and the sound of horses going wild from below.  To Gerraint, this all seemed like more than just an accident.  Something felt very wrong here, and that feeling echoed through time, confirmed over and over.

It seemed to Amphitrite, as well, that something was very wrong in the sea.  She was a life Gerraint lived nearly two thousand years earlier and while it was not his habit to trade places through time, having learned long ago that it was important to fight his own battles, when something outside of the normal course of events became determined to interfere, he saw no reason why he should not fight fire with fire.

That crunching sound came from below again, and all Gerraint could imagine was that the squid was breaking through the hull like a squirrel breaking open a nut.  The horses were utterly panicked.  One minute, he wiped his sword clean and sheathed it.  The next, he was not there at all.  Amphitrite, goddess of the sea, stood in Gerraint’s place, and the armor, which had adjusted to her height and shape, she sent home, back under the Second Heaven, and replaced it with something more suitable.

Immediately, Amphitrite calmed the squid with a thought.  As the great goddess of the sea, making the squid let go was not difficult.  All the same, she realized the ship was not at all well, having suffered a great deal of damage.  She could have repaired the ship with another thought, but that was not the way of the gods.  People needed to suffer the fate that came upon them, but in this case, perhaps a partial exception was in order.  As far as it went, the mate had been right.  A squid that big had no business being in the channel.  So she picked the ship, crew and all, into the air and deposited it eighty miles away at the dock.  That took a second.  Then she made sure it would hold together long enough to unload.  At last she rushed back to her poor squid.

“You’re more than welcome,” she thought to the captain, but her senses were entirely trained on the beast.  She wanted to know who sent it.  It had to have been sent.  It could not have come on its’ own.  Sure enough, she saw the imprint on the squid’s mind.  It had been instructed to attack their specific ship.  Oddly, she was balked from discovering the reason for it or who was behind it.  All she got from the squid was a sense of evil which felt something like a fingerprint.  She had to content herself with the fact that she would recognize that fingerprint in the mind when she found it again, and she took the animal safely back to the depths of the Atlantic where it belonged.