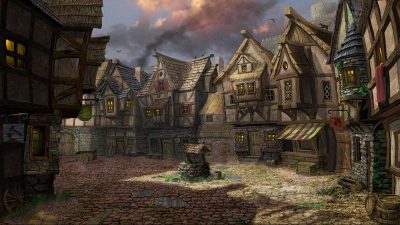 The so-called city of Thorengard sat on the bank of a broad river that emptied into the sea. It got surrounded, more or less, by a stockade, which had been partly built of stone and partly of whole trees planted deep in the earth, lashed together with rope, and caulked with mud. Ingut called them to halt on a small hill which gave a good view of the city below, and he pointed out certain features including the docks, the market area, and the roof of Yut-Heim, the hall of the king.  Festuscato noted that the man did not speak like a proud native.  He said it all just matter of fact.  As they began to descend toward the main gate, Luckless turned to the Roman.

“And what is on your mind?” he asked.

Festuscato turned up one corner of his mouth.  “I was just understanding once again why people like these would fall on their faces in fear and trembling at the sight of the city of Rome with her tremendous walls, broad avenues and thousands of alleyways, dozens of great ships in the harbor from all over the Mediterranean, and a half million people all bustling about on important business.  This city should barely be called a town, and even that word is generous.”

“Rome must really be something,” Luckless said.

“It is,” Festuscato confirmed.  “But even Londugnum would give these people pause and it is nothing compared to the Great City.”

“So you have said,” Luckless reminded him. 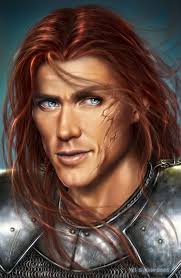 “Yes, but your Rome has become like a fat cow.”  Gregor nudged into the conversation.  “It may be great in size and beauty, but it is subject to the butcher knife.”

Festuscato grew silent.  He knew in his heart that Gregor was more or less right.  He had a commission from the Emperor and the Imperial Senate which stated that after he established peace in Britain, he was to seek out the reason the Germanic tribes were pushing so violently and permanently into the west. He was to resolve the problem, or at least find a way that Rome could counter those migrations and thus preserve itself.  Such thinking, however, was foolishness.  Before he even arrived in Germany, he understood that all he would likely find were people who were glad to take advantage of Roman weakness.

To discover the reason Roman power was waning and collapsing in the West, the Emperor Valentinian III needed to look in the mirror.  Indeed, all Romans needed to look in the mirror, but this they would never do.  One of the surest signs of civilization’s collapse was when the prevailing wisdom turned away from personal responsibility and toward blaming others for every ill.  When people stopped depending on themselves to make their lives as good as they could and hand to their children better than they got, and they turned instead to government to give it to them, as if government acted like some living god independent of the people governed, then civilization became doomed.

“What ho!” Vingevourt’s pipsqueak voice came up from the ground ahead.  “I came up the river and have waited here a long time for your arrival.”

“And here we are.”  Mirowen smiled for the little one.

“Ungh!” Ingut grunted at him.

“Good to see you,” Festuscato said to turn his mind from his depression.

“Come aboard, Majesty,” Gregor said with a big smile.  “See?  I have set a clean cloth just for you to leak on.”

Vingevourt climbed up.  “I will say, you are a thoughtful mudder.”

“Smells like a new one if you ask me,” Mousden mumbled before he flew ahead to get a closer look at the city.

When they came to the gate, they found a half dozen men laying about in the late afternoon. They came somewhat to attention on the sight of such a big party, but any semblance of order fell apart when they saw the contents of the party.  The men were strange enough in their dress, though they probably recognized the German and perhaps even the Britain.  The Roman and the Irish cleric might as well have been from China, but then the little ones really grabbed their attention.

Dwarfs were not yet strangers in the world, but they were not common, while elves, like trolls and gnomes were often heard of, but rarely seen.  Fairies had always been shy of humans, but this Cornish pixie with the slight greenish tint to his skin, his bat-like wings and claw-like hands and feet with their prehensile toes hardly fit the pattern.  They did not know what to make of Mousden, but Vingevourt they knew, at least in type.  They were astonished, however, to see the water sprite out of the water.

If Ingut had not been leading them into the city, there might have been some question as to whether or not they would have been allowed in.  Some believed the sighting of any little one was a sign of good fortune to come, but many more firmly believed they were an ill omen, and Festuscato felt sure he heard Odin’s name used as a curse as much as in prayer.

The trip through the town and its’ terribly muddy and garbage-laden streets did nothing to raise Festuscato’s impression of the place.  He found the royal stables hardly worth the name.  The hall of Yut-Heim at least appeared to be well built, a solid log construction with a kind of shingled roof found on a number of buildings and houses in the town.  It looked to be a marked improvement over the thatch they found elsewhere.

“Ingut.” His name came easily to the group of men inside the hall.  Everyone knew the ship builder, and because so much of their lives and livelihood depended on their ships, whether for fishing or war, Ingut seemed to have the run of the place.  In this instance, his first duty was to march up to the king’s table and nod his respect for the king before he spoke.  Mirowen quietly translated for the group who followed in Ingut’s train.

“He’s telling the king about your wreck at sea during the great storm and how he found you washed up on his shore.”

“His shore?” Festuscato mouthed, but listened.

“You are the Roman, and we are your companions, sworn in allegiance to you, and there is great power of magic in us all, as can plainly be seen in the Roman’s choice of companions.  When the ship got driven to the rocks of Heyglund, Ingut realized it must be because the gods decided we must be a gift for the people of this war-torn land.”

“Didn’t know I was a magician.”  Gregor muttered.  Mirowen kicked him to be quiet.

“Naturally, Ingut thought of his great king, Hroden, and brought the Roman here first of all, knowing that the king would understand these things far better than the lowly ship maker.”

King Hroden eyed them with an eye of serious consideration and another eye of amusement. A couple of men at a table laughed at the sight of the strangers, but the king quickly raised his hand for silence.