When Muhamed woke, he found the young farm wife sitting beside him, watching him sleep.  His booby-trap by the curtain looked undisturbed.

“Have I slept until dark?” he asked. “I had not planned on sleeping that long.”  He sat up and turned from her.  He felt the clay bottle with the last few drops of his elixir still in his vest pocket, and his knife still hidden in his cloak.

“The darkness fell a half-hour ago.”

“Good.  We need to go talk to people, to see if my work had any effect.”

“No need.  I have already talked to many,” the woman said.  “There are thirty of all ages ready to follow you to Babylon, to destroy your enemies.  Shall we go?” She seemed anxious.

Muhamed shook his head.  “You may have eaten, but I suspect it will take all night to walk to Babylon.”  He pushed his booby-trap aside and went into the other room.  The meat, bread, and broth looked untouched.  He shrugged.  These people did not exactly have a refrigerator.  He looked at the cup of water, and this time, he thought to skip it.  The woman noticed, but did not seem to care one way or the other.

“I will tell the others we will be ready, shortly,” she said, and stepped outside. 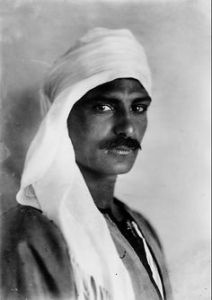 When Muhamed had eaten his fill, he questioned the broth.  But he checked again, and his few drops of elixir remained.  And besides, he told himself the vegetable broth, now cold, had not moved since supper.

He did not have to wait long.  The woman returned, and he rose to see what volunteers she managed to get him.  Outside, it looked like an ordinary enough crowd.  She was right.  They came in all ages and sizes.  One looked like a crippled old woman.  One little girl looked like a five-year-old.

“These are the result of your elixir. They suffered all day, but when the elixir expanded and came to rest in every part of their body, they came alive. They are ready now to kill whomever you wish.”  The woman smiled in such a way, Muhamed almost told her to stay in the village with the people until he sent for her.  He imagined moving on, alone, but he suspected they would follow and do who knew what.

“Does anyone know the best route and what gate we would best enter without causing suspicion?” he asked, as he considered losing the crowd once they got to the city.

“We have discussed this,” the young woman said.  “One man’s nephew oversees a small gate in the north.  We will go there.”

“Good.  Good,” Muhamed said.  “Lead the way,” he said, and two men and a woman went out front.  He followed, and decided he did not want to look closely at what damage and mayhem these people committed when they came alive, as the young farm wife called it.  He saw one old man, pale and lifeless, sitting against a wall.  He saw blood splattered on the wall, but he told himself it was just mud.  He told himself the man was sleeping, just sleeping.  He did not look up again until they left the village behind.

All night long, Muhamed felt more and more afraid.  The old ones did not complain.  The ones he considered children did not run and play, or do anything he expected from children.  They did not stop for food or rest, and he dared not make them stop.  He felt exhausted when about two hours before sunrise, they arrived at a copse of trees within sight of the city gate.  The farmer’s wife said they could rest there, and hide from whatever morning traffic might come to the gate.  They would go when the nephew came on duty in the late afternoon.  It sounded reasonable, but Muhamed put his back to a big tree when he sat, so he could keep his eyes on the others.  He feared to sleep, but he felt so worn, he could not imagine how he could keep himself awake.

Muhamed did wake, just before the sun came up.  Several men held him while they tied his arm and legs.  He saw the farm wife with his clay jar of elixir.  She held it up and smiled.  He tried to protest.

“It will do you no good.  You don’t know how to use it.  You haven’t the magic of Ashtoreth to make it work…” They gagged his mouth, and he fell silent.  Then the farm wife spoke.

“I will explain this in a way that you may understand.  This elixir has expanded into every cell in my body.  I can heal any wound.  You can cut me, puncture me, even my head or heart, and I can heal.  The only system not functioning correctly is the making of new blood cells.  It is like nature herself is fighting back against me.  We should be anemic, pale, weak, and as cold as death.  But we have found, if we drink the blood of the living, we can assimilate it into our systems.  You see?  You have made me virtually immortal.  And now that I have the elixir, I can bring more of us into flesh and blood. and we will at last be able to destroy all that is.

Muhamed’s eyes got big.  His mouth continued to protest, but all anyone could hear was muffled noises.  His modern mind told him such creatures did not exist.  It was not possible.  It was not real.  Thus, in the modern way, he denied the very reality that stared him in the face. Vampires did exist, and he created them.

“The farm wife smiled.  “It is so much more frightening and satisfying when the victim knows what is happening to him.”  One big man tilted Muhamed’s head to the side.  He screamed.  He yelled for help, a kind of automatic reflex word.  But no one was there to help him.  She bit his neck to puncture the carotid artery—the easiest, most blood-filled spot on the human body, and the blood dutifully began to flow.  She drank some, and some of the others had some, but she stopped the feast before Muhamed died.  She spit on the wound, and the wound closed up.

“Open it,” she said.  Two men grabbed him, and one removed the gag and forced his mouth open.  They did not need to do much forcing.  He felt so dizzy from lack of blood and oxygen to the brain, he almost passed out. The young farm wife leaned over and spit blood into his mouth.  He swallowed much of it, his own now tainted blood, though he gagged and could not swear some of it did not end up in his lungs.

The gag got replaced, and Muhamed felt the infection of blood and elixir filling his body.  He cried as the woman spoke.  “Now we wait until sundown.”  Muhamed died, and some unspeakable evil entered his body.