Lakshme, Sita, and Libra sat out under the night sky, sipping tea and counting the stars.

“Must you?” Libra echoed.

“You know I must,” Lakshme answered.

“Are there more Skudsku?” Libra asked. Lakshme shook her head, no.  The Skudsku, as Libra named the weed, fell to earth when Lakshme was young.  She first called it smart kudzu.  It grew like an ivy, much faster than kudzu, and could move, intelligently, and choke everything in its path.  It would have been bad enough if it fell in one place, but it broke up over India and landed in a number of places, determined to spread and eventually take over the whole planet.  Lakshme had to leave her happy home in Dwarka, travel up the Indus and down the Ganges, all through the budding Vedic civilization, fighting and destroying the Skudsku wherever her little ones found it had taken root.  She ended in Kalinga, a loosely formed land of cooperative tribes, not honestly a kingdom, between the Mahanadi and the Godavari rivers. Civilization only slowly leaked in their direction from the Ganges in the north.

“I have no word on Skudsku further south,” Lakshme responded.  “But if I have friends walking into the bad land, as Devi says, I must go to them.”

“It may be, sometimes you do too much for others,” Sita suggested.

“Karma works out, not in the grand things we do, but in the small, everyday things.  My work may never be perfect, pure, or holy, but in my humble way, I do what I can for others as I would have them do for me if I were in their circumstances.”

“Very wise.”  They heard the male voice before they saw the man.  Valmiki built, and in a sense, ruled the ashram they lived in.  “Did you learn this from your imaginary friend Devi?”  Valmiki and Rama knew nothing of the goddess, who stayed careful to appear only to the women.  Lakshmana knew of her, but only from a distance, and not that she was the goddess.

The women got prepared to stand and offer proper respect, but Valmiki insisted they remain seated.  He found a stool and joined the women in their tea and conversation.  He got them started again with a question.  “So, tell me why you must go with Rama to face the Rakshasa?”

“We do not know if the Asura is eating the people.  Only the use of stinging insects and spiders to disable the people suggests it,” Sita took up the explanation.

“All life is precious,” Libra said what she had heard Lakshme say a thousand times.

Valmiki continued to stare at Lakshme, until she answered.  Lakshme looked down at her own lap and spoke softly.  “Everyone needs a chance for forgiveness and a second chance to choose what is right, good, and true.  I cannot say more on that subject because of the future, but even the most vicious Rakshasas have not always been so.  They were once worshiped as the gods of the land.  They deserve a chance to repent of their ways and do penance to learn the right ways.  I can offer that, but I can only ask.”

“The Devas and Asuras were once the same?” Sita asked. 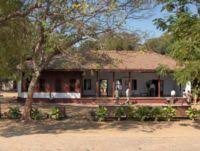 Lakshme took a deep breath and shook her head, but did not look up.  “The Ashri ruled this land.  The Divas came here six or seven-hundred-years ago.  Many of the Ashri joined them, though it felt like pulling teeth to make that happen without war.  But some Ashri resisted.  Most of the resistance has moved south, into the wilds, though not all.”

“South, where I came to build this ashram,” Valmiki said.  “Or do you mean south where the monkey people live.”

Lakshme slapped her thighs and looked up. “You and Rama,” she said, sharply. “They are not monkey people.  They are naturally dark skinned people, but people all the same.  They are Dravidians, a combination of dark skinned Shemsu and original Hamites who first peopled the land.  Many moved south when the Indus Valley began to build their cities.  Many more moved south when the Indo-Aryans invaded the land and spread their Vedic ways down the Ganga.  They are tribal.  Many are still hunter-gatherers, though they have a sort of high chief in Vali, Sugriva’s elder brother.  And I know half of what I am saying is hard to grasp, but they are not monkey people. They are just people.”  Lakshme let her steam run out.

“Wow,” Libra said, with great big eyes. The anger of the gods was something to behold, and the little ones were no less terrified when their goddess vented, even if not directed at them, and even if she was otherwise entirely human.

Lakshme continued more softly. “Many Asuras, the resisters, moved south with the people.  Sadly, Vali worships them and has let them run rampant through the southern lands. Even the Rakshasa that feed on the people.  The people are ripe to rebel, but the Asuras keep them down; now less so since Rama has killed some.”

“Lakshmana should not have cut off the ears and nose of Surpanakha,” Sita said, with a shake of her own head.

“Killing the demon would have ended it more mercifully,” Valmiki sounded like he agreed, but would never say Lakshmana made a wrong decision.

“Maybe Khara would not have come with his army,” Libra said, and cried softly at the memory.  Some people of Kalinga came out to support Rama, but Lakshme had to call on her little ones to fill the gap, and some died.  Lakshme felt some tears in her own eyes.

“And Vali escaped,” Valmiki added. He rarely said anything in judgment. Valmiki had a remarkable way of just stating the facts.

Lakshme sniffed.  “Well that happened yesterday.  This is today, and tomorrow I have to walk a long way.” Lakshme sounded ready to go to bed. She saw Rama and Lakshmana coming from their workout.  The martial arts seemed their best form of yoga.

“But wait,” Valmiki made Lakshme pause. “Because I have meditated long on this, and come to an understanding.”  He paused to order his thoughts while Rama and Lakshmana stepped up to hover around the group.  “I have concluded that you are indeed a goddess, as young Libra has referred to you more than once in my hearing.  You are the Devi of time.  The gods divide time by the ages in which we live.  People think of time in the days, seasons, and generations.  But real time runs in sixty-year cycles, roughly the number of days you normally live.  What incarnation are you?”

“Seventy-three,” Lakshme said. “But it is not incarnations.  It is simply rebirths, with no time off in between.  I am not a spirit, like the gods, who sometimes take on flesh and blood for a brief purpose and then go back to being a god.  I never get a break.  And I am almost always human, and even when I am not, sixty years about covers it.” Lakshme took a breath.  “But it is not something you should ever write about. Not ever.  Someday, the storyteller may jot down some notes, but that is risk enough.”

“The storyteller?  Have I met her?” Sita asked. 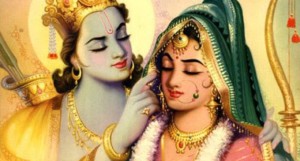 Lakshme continued.  “The things I deal with, not just here in this lifetime, but all over the world through the millennia, are things best not talked about. They are things that don’t belong to history—that might throw history all off track, and even to mention them might be damaging.”  Lakshme raised her voice.  “You should not write about me.  Please, leave me out of the story.”

Valmiki looked at Rama, then Sita and Lakshmana.  He finally looked at Libra and nodded slightly.  “I will not tell the story about you.”

Lakshme exhaled and stood.  “Good, now I can get some sleep.”

“We leave first thing,” Rama said, as he held out his hand.  Sita smiled and stood to take his hand and walk off to his tent.  Lakshmana followed the couple and Libra followed Lakshme, leaving Valmiki alone to sit and contemplate the universe.