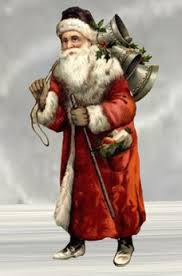 Cue: Carol of the Bells

“Christopher Shepherd,” Santa said Chris’ name as he slowly rose and walked down the center aisle.  “And you have seen the window.”

“Yes.” Chris did not know what to say. “Santa?” he repeated, and the old man nodded as he took Chris’ arm and gently led him to the altar.

“You can see the window better from here,” Santa said, and he turned his attention to point at the morning sun that streamed through the stained glass. “But, you see, there have been ten Santas since the birth of our Lord and Savior.”

“Ten Santas?”  Chris saw the window neatly divided into twelve slots, so it looked like a clock. Ten of those slots had pictures of people.  The eleven o’clock and twelve o’clock slots remained plain glass. 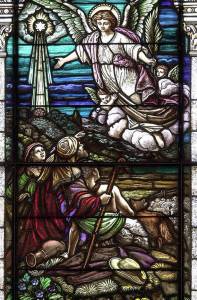 “Well, they haven’t all been called Santa, you know.  Let’s see.  I first met Kris on a trip to New York.  Mine was a merchant family, out of eastern Pennsylvania.  Christmas Eve, 1806, or 7… maybe 1805.  It was a long time ago.  Anyway, I explained the quaint Dutch traditions associated with Christmas to a young fellow by the name of Irving—that was his last name. Washington Irving.  I met him again in England about ten years later…” He waved off that train of thought and pointed again at the window.

“The first, the one o’clock picture, shows the first shepherd.  He was over sixty when the Lord was born.  A remarkable thing, to be so old in that day and time. He was out watching his sheep at night, and so on, you know, and the angel came to him, the Christmas angel. He filled Joel—that was his name—with the Spirit of Christmas on that night.  Love, joy, peace, generosity, celebration, and all.”

“Joel was a shepherd?”

Santa nodded again.  “From that day, wherever Joel went, the Spirit of Christmas went with him and touched so many lives.  He was there when the church started.  He went with the apostles to Greece. He eventually made it to Rome, where he picked up a young man to help him in his journey.  He cut through Gaul and went into the Germanys where the J of his name got pronounced like a Y.

“Yule, as it came to be called.  He got burned at the stake.  That happened around 140. You see, in bearing the Spirit of Christmas, he ended up living over two hundred years, kind of like Abraham, I guess.  But before he died, he passed on the Spirit of Christmas to his young Latin friend.  You see? Two o’clock.”

Santa pointed again, and Chris kept his eyes on the clock window.

“That young Roman considered what it meant to carry the Spirit of new birth, the celebration of the Lord’s birth.  In the Latin, it would be the name Natalis, but in Gaul, he compressed the idea and came up with Noel, in honor of his mentor, Joel.  Pater Noel, actually, once he got a few years on him and grew his beard, which turned white enough.  He carried the Spirit of Christmas for two hundred and four years before he passed it on to the original Saint Nikolas, back in the Middle East.  That was in 343.”

“Natural causes,” Santa said, and nodded with a small smile.  “There is a book that chronicles all of this. You can read about it, later.  He did not actually die, in fact, he took the job, and kept it well enough to put his imprint on the whole enterprise, at least the name Nicholas.  After two hundred years, when he was actually two hundred and seventy something, he came across a half-frozen man and his daughter in the Slavic wilderness.  He gave the man the Spirit of Christmas and took his place in freezing to death.”

“Four o’clock,” Chris pointed.  “I was wondering who the girl was.”

“Did she carry the Spirit as well?” Chris asked.

Santa did not exactly answer.  “Honestly, as the faith and Christmas celebrations spread, the job became too much for one person.  Ded Moraz was his name, and he chose to live in the far, frosted north.”

“Well…near enough.  He was the first to enlist the elves to the task.  That happened in the Scandinavian north, the land of the reindeer.”

Chris nodded, but he had a serious question.  “And that demon at five o’clock?”  He thought of Courtney.

“Another Nicholas, as he took the name.  Krampus was his demon.  From roughly 750 to 960.  Each bearer of the Spirit of Christmas serves about two hundred years.  Each Santa, if you will, from that point on, also had a demon of some sort to follows them around.  They frighten the naughty children, but you know, though they are powerless in Santa’s presence.  Kris said it kept him human, and I don’t disagree.  It is remarkable what Santa can do.  Faithfulness, humility and self-control are probably the most important traits to hold on to.”

“I can see that,” Chris said.  Santa paused to look in Chris’ eyes.  He said nothing, but after a moment he nodded and went back to the window.

“Six o’clock is the Dutchman, Sinterklaas, and his servant, Zwarte Piet. Servant, not slave, is the best way to refer to that.  Those were the dark ages, from about 960 to 1171.  In those days, the Roman Church tried to disconnect the celebration from the birth of the Lord and drag it back to December sixth, the supposed death day of the first Nikolas.  I don’t know what demon in Rome suggested such a thing, but it became a struggle. In the end, about 1171, a bishop, I won’t say which, beheaded Sinterklaas.”

“Burned at the stake, frozen to death, beheaded,” Chris said.

“I know,” Santa agreed.  “It is not an easy job.  In the Middle Ages, mostly in Europe, though just hinting of spreading world-wide, Sir Christmas, an honest to goodness knight, took the job.  He had a retinue of helpers by then, and the elves and fairies of Christmas as well.  He needed the help.  And in 1383, the one who followed, an Englishman, kept to the theme.  Father Christmas was what they called him.  He saw the celebration up to the days of reformation.

“The reformation.  That must have been a difficult time to hold things together,” Chris surmised.  “Christmas itself might have splintered into dozens of separate traditions.”

“There are dozens of separate traditions,” Santa said.  “Some still celebrate December sixth.  Some celebrate on January sixth—the day the wise men presumably arrived bearing gifts.  It is hard to keep track of, but the Spirit of Christmas, the love, joy, peace on earth, the giving and caring for one another and celebrating the time of the Word made flesh remains.”

“I will say, Father Christmas and Henry the VIII did not get along well.  But anyway, in 1601, the reformers wanted to move away from the Catholic tradition.  Sinterklaas had already dealt with the east-west schism, when the catholic and orthodox churches split.  This became like that, except the reformers were more nation-state or even congregational based, one of the main reforms being against a central, human authority. But that led to so many different churches—so many denominations.”  Santa shook his head, like the whole thing gave him a headache.

“Father Christmas found a German, since that was where most of the trouble centered. A Lutheran, Kris, with a beautiful young blonde daughter that he called his angel.  She took on the persona of an angel, sort of.  The Christkind.  Kris Kringle was his name, but some still referred to him as Nicholas.  I get Nicholas at times, or Saint Nick, sometimes. Can’t be helped.”

“I see you and Missus Clause up there at ten o’clock.”

“Yes.” Santa paused to pull out a handkerchief and sniff before he blew his nose.  “Pennsylvania Dutch, originally.  Clausen. Plenty of German roots, too.  She bravely went with me when the shop went bust. We headed to Indiana territory to make a new beginning.  We got caught in a snowstorm.  That was where Kris found us.  I forgot all about meeting him in New York that one time.  He offered me the job, and well… With the shop gone, and the Shawnee about to go on the warpath… Times being what they were, I accepted the job.”  Santa smiled and let out a little of his famous ho, ho, ho.  “I heard that once in a movie.”

“I know the movie,” Chris returned the smile.  “But that is more of a Halloween movie than a Christmas movie.”

Santa frowned.  “You know, I am not entirely happy with some of the ways I have been portrayed.  But honestly, each Santa, in turn, has had some impact on that portrayal—in the human psyche.  Nicholas, long white beard, living in the frozen north, and so on.  Then, there have been some exaggerations cooked up in the human mind.  Can’t be helped.  I hope you realize I don’t actually travel around the entire world in a single night, bringing presents to all the good boys and girls.”

“Oh, there is a workshop, and we make toys, but we also make plenty of ordinary things as well.  Shoes, coats, soap and clothes.  We package lots of food, mostly dried and canned, though some cookies and candy. Toothbrushes have been a big one these last fifty years or so.  Mostly, they get put in boxes and delivered to the poor and needy through others. Goodwill, Salvation Army, Samaritan’s Purse, and churches; thousands of churches all over the world.  I have delivered some few, special needs now and then, but mostly the elves take care of passing on our work to where it is needed.”

“Elves that appear human,” Chris understood, and had a revelation. “Those two soldiers in 1914, with the Christmas cookies.  They were disguised elves.”  His eyes got big.  “That old priest in the Catholic church was you.”

“Yes,” Santa admitted, before he looked down at his boots, what he could see over his belly. “And Plum and Roy.  Sorry about them.”

“They are all right,” Chris answered.  “Plum just talks too much without any watch on his tongue, and Roy doesn’t say enough.”

“Yes,” Santa let out that little smile.  “That about sums them up.”

“And Merry?” Chris said, but it was a question.

“That little girl… I mean, that lovely young woman.  She thought I was getting too old, which I am.  She wanted to bring you here to help me in my old age.  That was very kind and thoughtful of her.  But you know, once an elf gets attached, they are very hard to remove.”  Chris stared at the wall for a moment, and Santa looked at him, squarely.   “You know, if you marry her, she will stop being an elf and become human.”  Chris did not know that, and thought maybe that would be asking too much, but Santa took his arm again, as he did at the beginning.  “How about we let her decide that,” he said, and Chris nodded, before he swallowed his feelings and spoke.

Santa held up his hands to stave off Chris’ anger.  “She is here, and fine.  She is with her mother, Serissa.”

“Serissa? She is alive?”

“Serissa. She is the Christmas Rose, a fairy.” Santa paused to let that knowledge sink in.  Chris’ eyes got big as he remembered several strange events in Lilly’s young life.

Santa still had his hands up to make Chris pause.  “First things first.  Do you want the job?”