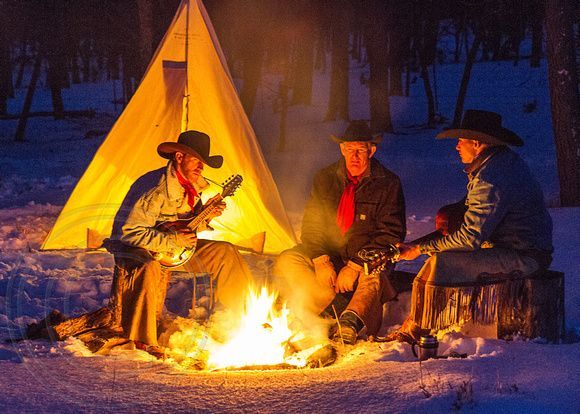 “This tree is more than two hundred years old,” Plum said, as he walked up from where the cowboys built a fire and got out what they had for supper.  One cowboy kept an eye on the reindeer to make sure they did not wander off into the forest that began a hundred yards off to the right.  The forest looked dark under the storm clouds, like a place even the Christmas lights could not brighten.

“It is tall enough, and bright enough with all the lights,” Merry said.

“It is very Christmas-like,” Chris agreed, but hesitated, before he added, “But something seems to be holding back the joy—the merry and bright—the Christmas Spirit.”

Merry took Chris’ arm and let out a small sound that suggested her heart might have broken.  “Missus Claus passed away a few years ago,” she confessed.  “And Santa has gotten very old.  It is not the same, but we try not to notice.”  She sniffed, and Chris slipped his arm around her to pull her in close.  Chris imagined one of the lights moved.  His mind said the wind, but there was no wind to speak of at the moment, like the calm before the storm.  Before he could look closer, someone called.

“Over here,” Roy’s voice sounded out in the snow.  “Mister Shepherd.  Merry.” Chris and Merry went to see.  Roy and two of the cowboys had gotten the evergreen out of the wagon and stuck it in a hole that Chris had not noticed.  They had spades to cover the roots, and Plum stood there admiring the tree.

“Looks nice,” Chris thought a compliment was in order.  “Looks bigger than I thought.”

Roy nodded, and Plum spoke again.  “You need to touch it to bring it to life.”

“Go on,” Merry said, and held his arm out toward the tree.  “Think of your Christmas tree at home.  Think of both trees, and all the love that went into them.”

Chris hesitated, but trusted Merry. He reached out and touched a branch of the tree, and at once the tree became strung with lights and ornaments.  The lights stayed lit, even though they had no place to plug them in.  The ornaments, he recognized.  His mother loved to decorate, and she kept those ornaments as well as she could through the years.  They looked worn, but lovingly clean, and… yes, he saw the ornaments he bought over the last ten years for his artificial tree. Chris dropped his face into his hands and held back his tears.  He mumbled for Merry. 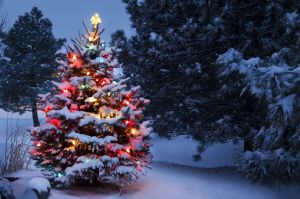 “Lilly would love this tree.”

He decided this game had gone on long enough.  He needed to find Lilly.  He needed to know she was all right.  He turned on Merry, took her by her shoulders, and said, “Tell me about Lilly.”

A dark wind blew through the camp.  The wagon shook.  The horses neighed.  The fire flickered, and the cowboy by the cooking pot yelled.

“They are stealing the reindeer.”

“All hands-on deck,” Plum yelled, and people rushed for their horses.

“Stay here,” Merry told Chris.  “You will be safe here, and I promise to tell you everything when I get back.”

Roy came up, trailing Merry’s horse.  She mounted and they rode in the direction the wind had gone, soon disappearing in the darkness beyond the lights of the trees.

Chris did not know what to do.  He sat down by the fire, left alone in the wilderness.  He stood and retrieved a blanket from the wagon and went to sit again, pausing only to assure the two big draught horses that they were not forgotten.  He poked at the beans that were cooking.  He sighed and felt grateful for the light from the tree behind him.  He refused to look at his own, personal tree.  There were too many memories there, and not all happy ones.  He supposed he felt grateful for the light from that tree as well.  Being alone, in the wilderness, at night, in a storm would be spooky, no, it would be frightening in the dark.

It began to snow great flakes of white, and soon, it began to snow hard.  The wind picked up, and Chris found his mind taken by the wind.  He remembered a day he did not want to remember.  Ricky was there.  He looked young.  Mama was there, too, weeping.  It was the day his father got buried.  They were at the graveside.

Chris sniffed.  He hugged his Mama and wept with her.  He tried to hug Ricky, but Ricky did not want to be hugged.  He looked out over the graves, and saw an angel there, in the snow. It did not appear a clear image; just an outline.  But Chris felt comforted.  He knew his father would be all right.  It was the promise of Christmas.

But it did not snow at his father’s funeral.  That happened in the summer.

Chris paused to gather his thoughts.  He looked again, but saw no image of an angel.  He stirred the beans in the pot and tried to wait patiently for the others to return. He looked at the fire and saw something he did not want to see.

He saw Ricky in full battle gear, carefully and quietly climbing the steps to the roof, clutching tight to his rifle.  The village was on fire, but sniper shot continued to come from the roof.  They could not call in air or artillery against innocent civilians.  They could not complete their mission under fire.  He came around a corner in the staircase. He faced a boy—barely a teenager holding an AK-47.  Ricky hesitated to kill a child. Triggers got pulled at the same time.  The boy collapsed.  Ricky got riddled full of bullets. 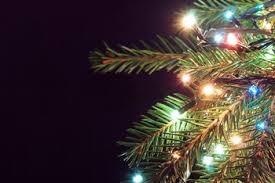 “No,” Chris yelled and covered his eyes.  He prayed for Ricky.  He prayed for Lilly, and Serissa, whom he never met.  He prayed for that boy, and wept some more.  He wiped his eyes, stirred the beans once, and stood.  It started getting too cold to just sit and wait. He put another log on the fire, and dreaded what was to come.

Chris turned to stare at the big Christmas tree set out in the middle of nowhere.  Indiana Territory, 1812, or actually, 1811, Christmas eve.  He imagined the lights were moving again.  It had to be a trick of the wind, the snowfall, and the ice in the branches.  The moving lights looked hypnotic.  He began to cry before he saw.

He held his mother’s hand when she died.  He wept then.  He wept again in the face of the tree.  He heard a voice then, or perhaps now.  It may have been the nurse.  He always thought it was an angel.

“She is in a better place now.  There is no more pain and no more suffering.”  Poor Chris went out the door to Lilly.  He held her and wept all over the little girl, and she wept with him.  They were all that remained, but at least they had each other. They had each other, Chris thought. He needed to blow his nose, but he heard something that took all of his attention.

“Uncle Chris…”  Chris turned toward the dark woods.  He thought the call came from there.  “Uncle Chris. Help me.”

Chris ran across the field and entered the woods without a second thought.

MONDAY, Tuesday and Wednesday, Christmas Day, the final chapter in A Holiday Journey:  Chris confronts the real Santa Claus, but it does not turn out the way he expects.

Until Then, Happy Reading 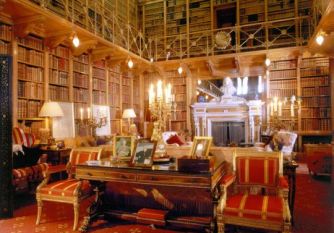