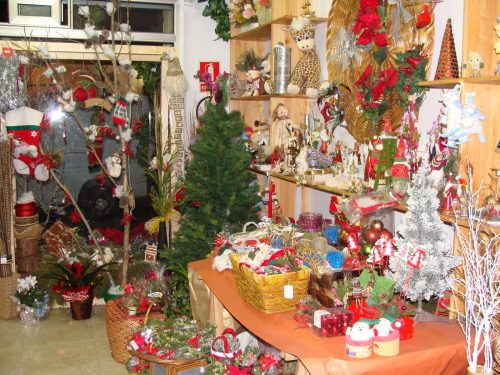 Chris got up in the morning, and stretched.  Sunday morning, he thought.  Maybe he should take Lilly to church.  It certainly would not hurt for him to go.

Chris opened the door to his room and paused.  His eyes grew wide.  Someone got into his apartment in the night and decorated.  He saw Christmas decorations everywhere.  He loved them, but to be honest, he imagined, Lilly will love them the most.  He first thought to blame Mary.  She had a spare key in case of an emergency.  His second thought was to wake Lilly, to show her; and he grinned, secretly, for what he felt would be a big, wonderful surprise.

Lilly was not in her bed.

“Lilly,” Chris called.  He poked his head back into the living area and shouted toward the kitchen.  “Lilly.”  It occurred to him that maybe Mary came over early, and maybe Lilly helped decorate the place.  They said they spent an hour and a half looking at decorations.  He really did not pay attention to the bags they carried, except to carry a couple, because they said they bought him a present.  He wasn’t supposed to peek.  And after decorating, maybe Mary and Lilly went out for treats.  He could not imagine how they did all this, and quietly, so he could sleep.  Then again, maybe the decorating woke him up in the end.  It did seem rather earlier than he normally got up on Sunday morning.

Chris got dressed, made some coffee, and waited as patiently as he could.  At last, he ran out of patience.  He went across the hall and knocked on Mary’s door. He waited again.  He knocked again.  Mary came to the door in her nightgown, rubbing her eyes, and Chris paused on that vision.

“Did you age five years overnight?” he asked.  Mary raised her eyebrows, looked up at him, but said nothing since she did not appear to be awake.  “I figured you for a college girl.  How old are you?”

“How old do you want me to be?” she asked softly, and somehow, the opening of her mouth to talk caused her to yawn.

“Is Lilly here?”  Chris got to the point.

“No,’ Mary said, and opened her door as if inviting him in to check.  He stepped only into the entranceway; enough to look around.  He had never actually been in Mary’s apartment before.  All he saw was Christmas.

“I see the Christmas bug got you, too.”

Mary looked down, shyly, like she did not know what to say, except she did not want to lie to him.  “Old family tradition,” she finally said, like an admission.  “Most of these decorations are like the decorations on your tree.  They are older than I am.”

Chris paused with one eye on a porcelain Santa doll, before he turned and eyed her, suspiciously.  “You weren’t there when I mentioned that to Lilly.  How did you know about the decorations for the tree being older than I am?”

Mary fidgeted, and would not look him in the eye.  “You mentioned it over supper.  Maybe Lilly mentioned it.  But what is this about Lilly being missing?”  She needed to change the subject

Chris shook his head.  “There are other kids in the building.  Maybe she is feeling better and went out to play so she would not disturb me.  There are a half-dozen kids she played with over the summer.”

“Has she done that sort of thing before?” Mary asked, “Leaving without telling you?”

“No,” Chris admitted.  “But maybe she did not want to wake me.”  He looked at Mary who returned a look of concern, anticipation, and something else Chris did not want to think about.  “I made coffee,” he said, quickly, before he said something out of line. Mary looked very attractive in her nightgown.

“I’ll get dressed and be right over,” Mary responded, and Chris watched her close her door.  He stared for a moment at the outside of the door, thinking improper thoughts, before he went into his own place and called again for Lilly.

Mary did not take long.  While she poured, and sipped some coffee, Chris noticed the window.  It looked unlocked and cracked open just a bit. That felt odd, since he never opened that window, and did not even know it could be opened.  The feeling that Lilly may have been taken in the night washed over him.  He felt very afraid for her, and got upset, imagining the worst.

Chris pushed up the window, and saw the screen in place, but for a small hole which had been cut to allow an electric wire inside.  He followed the cord to the plug before he craned his neck against the window.  Something looked lit up on the outside of the building, and it appeared to stretch the entire length of the building beneath his windows.  It looked like Christmas lights.  He went to his bedroom to see if it stopped there, or if his electric bill would have to cover the cost of something lighting up the whole outside of the building.  Mary came on his heels, coffee cup in hand, and he turned to her.

“Did you put up all these decorations?”

“No. I did not do any of the decorations in your apartment,” she said, honestly.  “Why?  Don’t you like them?”

Chris went back to the kitchen, and Mary followed.  He picked up a porcelain Santa that looked remarkably like the one he saw in Mary’s room.  “I like them well enough, but now I am seriously worried.  If you didn’t do this, who did?  I have to find Lilly.”  He headed for the door and grabbed his coat, and his phone.  Mary still followed, but offered a thought on the way out.

“I don’t think anyone who would sneak in and decorate your rooms would kidnap Lilly. I mean, Merry Christmas, and by the way, I am kidnapping your little girl doesn’t make sense.”

Chris did not answer.  He began knocking on doors, starting with Missus Minelli next door, and then where he knew the children lived, beginning with the apartment of the little girl in Lilly’s class who sometimes visited.  No one knew anything about where Lilly might be.  Chris and Mary checked the laundry room in the basement, and the roof, where the children were never supposed to go.  Chris knocked on the building manager’s door, and no surprise, no one answered.

He had a terrible thought and called the hospital, though he could not imagine medics coming in an ambulance and stealing a little girl; and without waking him.

Chris walked out of the building front door, but said to Mary, “She wouldn’t go out. Her coat is still hanging upstairs.” He walked to the side of the building, and saw the lights hanging perfectly beneath his windows.  It appeared to be a blanket of little gold and silver lights that stretched the perfect length of his apartment.  Carved out of the gold, in red and green letters, and surrounded by the gold and silver, the sign said, “Merry Christmas”.  To be fair, the main part of Chris’ heart and mind loved the sign.  Only a small part worried about his electric bill.

“It is cold out here,” Mary admitted, as she made a small snowball and tossed it to him, rather than at him.  “She wouldn’t come out here.”  Chris ignored the snow, but nodded to the cold.  They went back up to the third-floor hallway, but did not get back to Chris’ rooms before he had his phone out again to call the police.  Mary tried to say something, but Chris put her off.

“But, she is only six-years-old.”  He had to say that, several times.  Finally, the police agreed to send someone out, even if it was Sunday.  Chris hung up.

Chris looked both angry and upset.  “They say the law for minors requires a twenty-four-hour waiting period before they can do anything.  That is so stupid.  A child could be frozen to death, or abused and left for dead in some dumpster alleyway in twenty-four hours.”  He sat heavily on the couch.  “Now I am scared for her.  I thought she was with you.  She wasn’t. I thought she was with her friends. She wasn’t.  I thought she was off playing.  Again, no sign of her.”  He found a few tears, and spoke from his heart.  “I thought I could raise her.  I fought to get her.  I’m the only family she has.  She is the only family I have.”  He cried softly and briefly.  Mary found some tears, too, as she sat beside him on the couch, and surrounded his hands with her own.

“We will find her.  She will be all right.  Believe that. Why should we believe she is in trouble?”

“Um, decorations,” Chris said, as he moved his hands so he could hold Mary’s hands more securely.  “Someone came in here last night, and now Lilly is gone.  That can’t be coincidence.”

“Okay,” Mary said, and reluctantly let go of his hands to point out certain things. “So, let us look at the evidence. Everything here says love, joy to the world, peace on earth, and good will to all people.  There is no evil in any of it.  Judging by the evidence, if we believe the decorators took her, we should think only good has happened to Lilly.  We have to believe that.  Sometimes, you just have to believe.”  She touched the roof of the little table-top manger before she sat down and reached for his hands again.  Chris hesitated, before he nodded and gave her his hands; and Mary’s face lit up with her smile, like a Christmas light.  Chris smiled, too, but on the inside.