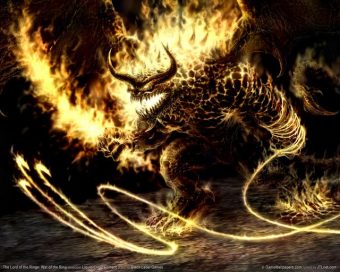 As the light grew in the valley, the slow, sneaky movement of the Wolv became evident.  Alesander pointed out the closest four out of six, and when they were ready, he said, “Fire.”  The Wolv were caught unprepared, and it took a moment before they crouched down and returned fire.  The return fire did not get through the screen of the goddess, though there were some good shots.  Sadly, the fire from the people had little impact on the shielded Wolv, except as a distraction.

The elves and fee were able to get close, and when the shuttle had a small explosion and began to smoke and send sparks on to the field, every Wolv eye turned to see.  The elves struck with five or six spears on each Wolv.  The wooden spear handles did not conduct the electricity of the shield, but the metal spear points strained the shield generator until it burned out.  The unprotected Wolv then died from multiple wounds.

When the two Wolv abandoned the shuttle, being without wrist shields, they got easily cut down by the fairies.  Two fairies, being the size of men in order to draw their blades, were sliced by Wolv claws in the exchange, one in the arm, and one right through his chest protector; but the wounds were not deep.  Eight elves were shot in the attack on the six Wolv in the field, three fatally, and the other five seriously, but the five would heal in the next hundred years. 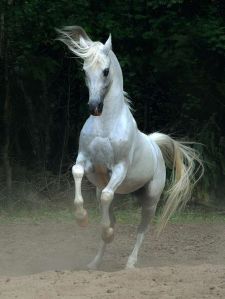 The smidgens, elves and fairies pulled back right away once the work was done, and good thing because the moment the sun broke the horizon, people had to shield their eyes.  A magnificent, dazzling white horse came racing over the far ridge. It glowed with a light as bright as the sun, and Junior had to look to make sure Ulladon did not turn to stone.

“They are all fine,” Rhiannon assured him as Junior turned his eyes again toward the horse.  It left the ground and flew, which reminded him of the twin horses of Apollo that drew the chariot of the sun.  It landed at a spot beside the Wolv shuttle, and stomped the ground several times before it opened its mouth and began to roar.  As it roared, it changed shape.  The horse stood on its hind legs, which thickened to ogre-like legs, and its front legs became arms.  Its body grew to a titanic size as the light it gave out faded and blended into the appearance of the body being on fire, especially in the eyes.  The horse nose diminished as the head ballooned.  The pointed ears remained, but softened, as the eyes moved to the front and the teeth became long and sharp.  What had been the horse became the titan from the cave, and it quickly grabbed the whip it carried on its belt.

The whip cracked three times, and the ground spit fire. Ten thousand Sarmatians in their armor, on their armored horses, carrying their deadly lances lined up far behind the titan, ready to charge.  Five thousand Scythians prepared to back them up.  The other combined tribes on the left and the right prepared seven thousand men each to attack the flanks.  It was close to double the number of defenders, and the enemy still had men in reserve.

The Sun-runner, Heliodrom, the titan stepped a few steps forward and cracked the whip, which somehow reached all the way to the line of defenders.  One Roman burned to a crisp.  One Celt burned next.  The third crack turned a Goth to ash, to blow away on the wind.  The fourth crack killed a Slav.  The fifth crack had been meant for Junior.  Junior saw it in the titan’s eyes, but a man in a long cloak with his hood up and a staff in his hand stepped up and raised his arm.  The whip curled around the arm and the man yanked the whip free of the titan’s grasp.  The titan roared, and the Sarmatians began to move forward at a slow walk. 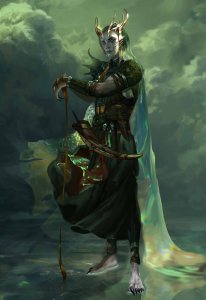 A second man showed up on the other side of Junior before Junior could say anything to the man in the hood.  This second man looked tall and lean, a swimmer’s build. His skin appeared gray-green and moist, covered only in seaweed.  He held something in his hand and held it out to Junior as he spoke from behind steel-gray eyes filled with death for Junior’s enemies.

“The Lance of Lugh,” the man said.  “And the apples taken by Apollo have been found and returned to the island of Avalon of the Apples where they can be guarded against misuse.”

Junior took the lance, said thank you to Manannan, Celtic god of the sea, and turned to the man in the cloak.  “You thought to make ambrosia with the apples of youth and healing.  You thought to make new gods for yourself.  Now, that will be impossible.”

“So I gather,” the cloaked man said in a familiar voice, because of course it was the Pater, Mithras himself.

Junior called for his own shield to go with the lance, and he caused the likeness of a dragon to appear on the shield.  Then he called for a plain white fairy weave tunic to wear over his armor, and he caused a dragon emblem to appear on the tunic as well.  “In honor of Fae and Berry’s father who sacrificed himself to bring down the Raven of Mithras.  All of the elves, dark and light, the dwarfs and the fee should have dragon tunics. It will help the Goths, Slavs, Romans and Celts remember who is on their side.”  Junior smiled toward the ladies before he turned to the task.

“Stinky.”  Junior called and whistled, and the mule trotted up, a true saddle with stirrups on its back over a blanket of white with red crosses on it, much like the knights of the lance. That was the thought that ran through Junior’s mind, though he honesty imagined more of a warhorse.  Stinky ignored the gods that stood to Junior’s left and right.  It butted right up to Junior, and Junior stroked the mule’s nose and instructed it before he traded paces with Gerraint. Gerraint mounted.  Junior had called to his armor to replace Greta’s dress when he first came, so all Gerraint had to fetch was his helmet.  He got ready, but he thought to add one thing out loud to whomever might be listening.  “Go for the face and eyes.  Maybe you can distract the titan this time so I can get close enough.”

Gerraint and the mule walked down the front of the man-made ridge and carefully went out beyond the trenches and spikes.  He paused there and saw the Sarmatians were still a long way off, coming from the hill on the other side of the valley. The horses still walked, though the line already looked a bit ragged.  It would be a couple more minutes before they started to trot, and 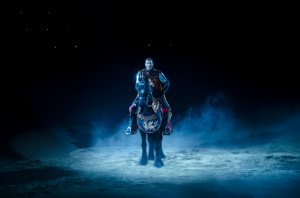 they would trot for a little way before they galloped and charged.  The ragged line reminded Gerraint that these were semi-nomadic men, and mostly farmers.  Arthur’s men were also mostly farmers, but these men and their horses did not have the rigorous training of the RDF.  All the same, they were formidable warriors when they went into battle. The Sarmatians invented heavy cavalry several centuries before the Middle Ages.

Gerraint paused long enough to be distracted.  He saw the look on the titan’s face, when the laughter stopped and got replaced with surprise.  Stretching out to Gerraint’s left and right, only a Titan size away, were what looked like thousands of knights of the lance. Stinky started to walk as Gerraint yelled in his mind.  “Yin Mo!” Then he saw something, or several somethings appear around the titan’s head.  They were giant images of the faces of all the ancient sun gods, and they swirled slowly around the titan’s head and looked down on the Helios with disapproval.  Gerraint made out the faces of Apollo from Olympus, Utu from Samaria, Ameratsu from far away Nippon, and Lugh as well, and he saw the titan raise his hands against the accusing faces.  Stinky started to trot when the knights trotted, and Gerraint thought real loud “Sunstone!”  He imagined having words with the elf wizard, but then he had to focus on what he was doing.

Gerraint told the lance to slay the titan, and no one else.  The lance had the reputation of an older dragon, slow to obey once it started to feed. He tucked the lance up under his arm. He knew the work well.  He also knew Stinky would never reach a thundering gallop, like a real war horse, but the mule’s size, weight and strength would make up for much of that when they rammed the lance home.

Grassly and his gnomes were out in force, all but invisible in the winter grass under the cloud filed sky.  The knights of the lance were spaced around Gerraint to give the titan a wide berth, but at the last second, the titan noticed one of the oncoming knights headed right at him.  He reacted too late, got one of Grassly’s arrows in his left eye and got the Lance of Lugh shoved up under his ribs.

The lance was hungry after being on the wall for centuries.  Gerraint tried to hold on, but the lance twisted in his hands.  It felt like a ravenous beast let loose to devour the very fires of the sun.  It drank the titan’s blood of fire and far from being burned by the sun, it remembered when the fire of the sun carried it to victory after victory. 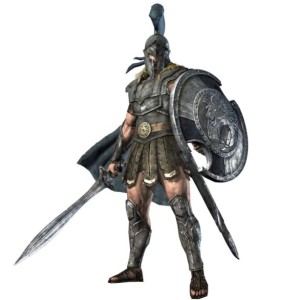 Despite the special saddle, stirrups and all, Gerraint got knocked completely off Stinky’s back.  He landed hard on the field.  He got shaken, but not hurt, and he rose quickly and pulled his sword, Wyrd, in case he needed to finish the job.  He watched as the faces of the old gods faded from sight, and the arrows of Grassly’s gnomes, that had no affect or bounced off at first, were now turning the titan into a true pincushion.  Gerraint smiled at the name for one second before he looked for Stinky. The mule skirted the titan and galloped with the knights of the lance for several hundred yards without Gerraint, before it stopped and started trotting back.  Gerraint only then looked up at his opponent.

The titan had been completely blinded by then, but the eyes were glazed over, and Gerraint watched as the titan fell to his knees.  The Lance of Lugh pushed out the back as the spearhead pulled the butt of the lance all the way into the titan’s body.  When the lance head became exposed, he heard a great moaning sound that echoed across the fields.  It came either from the titan’s lips, though the lips did not move, or from the titan’s body, like the slow leak of air escaping, or it was the lance itself roaring.