Greta felt pleased with the way things turned out, and would have said so if she had not been interrupted by a scream in the distance.  The men on the wall were turned toward the bonfire and clapping along with the music instead of watching for the enemy.  As feared, the Lazyges did gather reinforcements and brought them up into the hills.  One wall watcher fell off the wall inside the stockade and another yelled, “Plainsmen,” even as everyone could see the plainsmen perfectly well, scrambling over the wall in that spot, and sporting swords and long knives, ready to do battle as they came to the ground.

Greta sent her dress and red cloak away again as she recalled her armor, this time with all of her weapons.  Then she vanished as Gerraint, son of Erbin, a six-foot virtual giant for that day and age stepped into Greta’s place and immediately drew that big sword from his back.  Even as people were screaming and running away, some of the men searched for a weapon, and Mavis let loose three arrows from a bow that no one knew she had. Three Lazyges went down before Gerraint waded into the invaders.  He put three more down almost before Gwen could draw a breath and the boys could close their mouths.  Then the Lazyges made some mistakes.  One fired an arrow back at Mavis, not that he had any chance of hitting her.  One got a good right fist into the eye of Briana and knocked her head to the side.  Briana got mad, struck him back and the man went straight to the ground.  And one Lazyges let out a pirate worthy laugh as he cornered three young women against a wagon.  Gerraint went away, and the Nameless god stepped into his shoes. 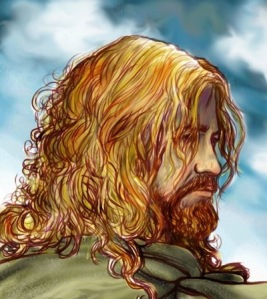 “Enough,” Nameless shouted a shout that reverberated all through those hills.  Every Lazyges inside or outside the wall froze in place and could not move. Nameless let his godly senses search the area and found the leader of this raiding party still outside, sitting comfortably on his horse, waiting for his expendable men to make it safe for him to enter the village.  “You.” The Lazyges leader instantly found himself inside the compound, suspended a foot off the ground, Nameless’ hand wrapped around his throat.  For only a second, Nameless let the man glimpse the deepest pits of Hella’s domain and experience the hopelessness of Tartarus.  The man caught the idea that Nameless could leave him there, and he came back to the compound without the same degree of sanity he had a second earlier.

“You.”  Nameless’ own word was turned on him as there came a flash of light and the sound of thunder beside the bonfire.  A woman appeared, tall and beautiful with a haughty, arrogant look on her face and fire in her moonlit eyes.

Nameless tossed the Lazyges leader twenty feet away and marched straight at the woman.  She lifted her chin and tried to show courage in the face of this man, but it did not look like he was going to stop.  When he got real close, she staggered back a step, but he caught her around the waist, pulled her in close and planted his lips on hers.  Her eyes got big for a moment before Nameless heard something go click in the woman’s mind.  Nameless was, after all, the son of Vrya, the Aesgard goddess of love, and he poured all that love into the woman’s heart before he let the woman go.  The woman took a couple of steps back and stared at him in silence.  This time, her eyes showed a layer of deep confusion over the fire of deep desire. She wiped her lips with the back of her hand and slowly faded from sight.

“Go,” Nameless said and waved his hand.  The Lazyges found themselves back outside the wall, seated on their horses.  Their leader screamed a scream that sounded only slightly sane, and he rode as fast as his horse would ride in the dark, certainly faster than would be safe, but his men followed without complaint

The man of the Wolf Clan that had been stabbed and thrown off the wall got tended to by Gwen, and the boys were right there, helping. Nameless smiled.  They were honestly good people.  He went away with that thought and took his weapons with him. Greta came back, but she kept the armor because it felt safe.

“Lady?”  Mavis came right to her elbow, her bow long since vanished, because people did not bring 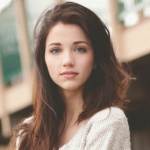 weapons to a feast.

“Come,” Greta said.  “We have to praise Briana for the effort, even if she gets a black eye, and then we need to find where Alesander, Lucius and Hermes are hiding.”

In the morning, Elder Dunova had ten men of the Wolf Clan, all volunteers, ready to escort the party, first to the village of the Raven Clan, and then to the Dragon Clan.  The men were all on horseback and had two mules of their own because Alesander assured them his group would not be going on foot.

“So, it’s the low road.  That is mostly safe.  The Lazyges would have to be stupid to attack a party of fighters.  Even against merchants and simple farmers, they always lose men whenever they come up on to the low road.  Of course, no one ever said the Lazyges were smart.”  Dunova grinned, and Alesander returned an honest smile.

“As long as the lady is safe.  My men and I and Briana have pledged to take her safely to her destination, wherever that may be.”

“So, you think she will not stay with the Dragons?” Dunova asked, but Mavis with her good ears reported curiosity in the question, not probing.

“Druids do not stay long in one place,” Alesander said honestly enough.  “She did mention wanting to visit her brother at Porolissum.”

“Back into Roman lands,” Dunova nodded.

“At least he did not say that like a swear word,” Mavis reported. 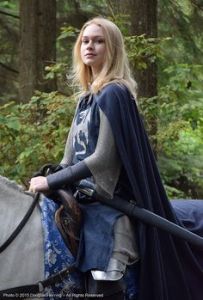 “Good,” Greta responded, and made Mavis ride beside her all that day.  Mavis stayed good, and only looked back now and then to where Hermes and Lucius followed. Alesander and Briana rode in front of them and seemed to be getting along well.  Greta imagined if it had just been the six of them, they might do well enough, but to be sure, she felt safer surrounded by the men of the Wolf Clan.

Greta spent the day observing the hamlets and many farms they passed along the road.  The west side of the mountains and the foothills were hardly the unpopulated wilderness it might appear to an outsider.  It really was a bulwark against the wild Lazyges, the plainsmen that rode the steppes that started where the hills petered out and stretched to the horizon.  She remembered there were some two thousand Celts that came through the forest to aid the defenders of Ravenshold against an invasion of the Germanic Quadi.  She wondered how many of Dunova’s ten men of the Wolf Clan might have been there.  It only happened seven years ago.