“Bryn ap Trefor, I am here.”  It sounded like a squeaky voice, and a man staggered into the room that could not have been five feet tall if he wore heels. Chief Bryn laughed for the next half-hour, and the only thing Dyrnwch could do was shake his head.

“He has been telling tales again.”

“Yes.”  Dibs spoke with some disgust, and a look that set Bryn to laughing harder.

“Trying to frighten us,” Mousden said, a bit loud.

“But, did you really fight off a whole Irish horde single handed?” Seamus wanted to hear a good adventure.

“It was more like fifty Irish, and my son, Addaon and a hundred of my men were there to help,” Dyrnwch admitted as he sipped his ale and sat on a seat obviously made for him so he could reach the table.  His son Addaon came with him, but so far, he kept respectfully quiet.  Gaius offered a compliment to turn the conversation.

“Your son has your look about him.”  Addaon appeared a good looking, full sized young man, but Gaius’ comment started Lord Bryn on another round of laughter.

“My thanks,” Dyrnwch responded.  “You are not the first to say so, but the truth is, his mother and I adopted him when he was very young.  I’m sorry, but we don’t know who his real parents might be.”

Oddly enough, Festuscato knew just from looking at the young man, at least he knew the boy’s father, but he did not feel it was the time or place to speak, so he held his tongue.  Mirowen also appeared to be holding her tongue, and Mousden took their example and said nothing.  In the end Bryn, Dyrnwch and Addaon all pledged to bring men to Caerdyf within the week, and the group moved on.

Mirowen opened up on the road.  “That Addaon is a breed, half-breed I would say, fairy I think.”

“Fairy for sure,” Mousden said.  He rode behind Mirowen and hung on to her waist.

“And a little something more,” Festuscato said, and knowing that he could never get away without explaining he added, “Talesin, that disobedient child of a mother is his father.  One day Addaon will have a daughter or a son, and they will have a daughter who will marry Uther and give birth to Morgana, the witch who is at least not a bad witch.”   Festuscato shut up, and Mirowen dared not ask another question because she knew Talesin was the son of Danna and a fairy Lord when Danna took on fairy life, and so Talesin became immortal, receiving that spark from Amonette, the serpent of Egypt, the hidden part of the goddess that remained when Danna became a complete fairy.  It was complicated, but a subject best not talked about, and Mousden felt it too. His eyes got big, but his mouth stayed closed. 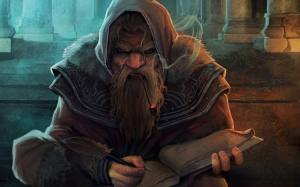 Heading down out of the hills, now clearly headed for the south coast of Wales, they came upon a sight beside the Roman road. A young dwarf sat on a wooden chest and looked despondent, like he lost his true love to a terrible tragedy. Gaius and Seamus got right down and went to see what could be so wrong to cause the boy to come to tears, but they stopped when they saw that it was not a boy at all.

“Why so glum, chum?” Festuscato asked in English because the words popped into his head, and he knew his little ones could understand every language.  He, Mirowen and Mousden also got down, but Bran and Dibs stayed in the saddle.

“Why is it not safe?” Seamus asked.

“Do you have a name?” Gaius asked at the same time, and the dwarf answered both questions with one word.

“Luckless,” the dwarf said.  “My name is Luckless, and that should explain everything.  My own people threw me out the minute I became a full-grown adult, because I am a jinx and they said it was not safe to allow me to stay.”  He took a deep breath and sighed.

“Your own family threw you out?” Mousden asked, with disbelief in his voice.

“My family was in the front of the line,” Luckless said.

“Well, this is your lucky day,” Festuscato said, with a gentle smile.  “Do you have any tools?”  Luckless nodded.

“My father gave me his tools, the family heirloom, with some things packed for the road,” Luckless said.  “My father said it was my inheritance early, right before he told me to go away.”

“We could take him with us?” Mirowen asked, with a look at Festuscato, and Mousden appeared to agree.

“And some stray puppy dogs,” Festuscato said, without explaining what he meant.  “But I thought of giving this lucky fellow a job.  I need a new cross and a silver chalice and two golden candle holders for the monks of Branwen’s Cove as payment for these horses.  I don’t see why this fine dwarf might not get the work.” He turned to the dwarf.  “We are going to see the Wizard of Oz.  Mousden is needing courage and Seamus is looking for an adventure.  Mirowen is not looking for anything because she is too near perfect as it is, but Gaius and Bran and Dibs are all looking to fulfill their obligations.  I don’t see any reason why the Wizard can’t change your luck.  Come with us.”

“But I don’t have any gold or silver,” Luckless said, like he only heard the first part, or that might have been the only part he understood.

“I’ll supply the materials,” Festuscato said. “Just tie your box to Dib’s horse so he can protect it and you can ride behind Seamus and tell him all your adventures. I must tell you, though, we have a couple of minor inconveniences to go through first, like an entire Irish army and then a Saxon army, but that should not be too bad.”

“Uncle Weland has taken the dwarf army out from the mines, two hundred strong to battle, but he refused to let me come even though I have strong armor and a sharp ax.”

“Up,” Festuscato said.  “Tell Seamus about the chain of Weland, and the ring of it he forged to woo his fairy wife.”

“How do you know about Uncle Weland?” Luckless asked, and then he began to cry because he knew who Festuscato was, and Mirowen and Mousden and Gaius all comforted the dwarf while Seamus asked,

R6 Festuscato: For Peace.  Sometimes, the path to peace is a struggle.  Until next time: