It took two months for the dragon wing to heal. Donogh went almost every day.  He would have gone every day, but sometimes he had too many chores.  On those days, he made sure whoever went took something special for Clugh.  “A boy and his dog,” Festuscato quipped.

Festuscato went himself every day at first, and Dibs, Bran and Seamus went often.  Mirowen said they were all mad, and Mousden screamed the same thought every time they invited him to tag along.

They kept Clugh fed by building a fire pit near the boulders where they could burn whatever deer or other generally smaller animals they could catch.  In the second month, Seamus went one day by himself with a book he made of blank parchment. He tried to get a sketch of the dragon, but Clugh would not leave him alone.  He wanted to be petted, and only took a break when he inhaled his daily offering of food.

Clugh slept for a whole week in the second month. Festuscato explained that dragons stuffed themselves over several months or years before they finally had to hibernate and digest it all.  The older Clugh got, the longer the time of hibernation.  He was aware that after ravaging a countryside, some big old dragons could sleep for a whole generation, about thirty or forty years. Clugh sleeping for only a week showed how young he really was.  Festuscato also pointed out that when a dragon awoke after a long sleep, they were very bloated with gas and tended to flame

everything in sight for a while.

“It is not a good idea to wake a sleeping dragon,” he said.

“It is not a good idea to go anywhere near a dragon,” Mousden shrieked.

Festuscato kept one eye on the dragon during that time, but the other eye stayed on Patrick.  The Bishop seemed to be making good progress and even converted the local Lord MacNeill’s mother.  MacNeill complained about it to Festuscato.

“Time will come when every Irishman will be a Christian, and then we won’t be able to fight anymore.”

Chief MacNeill’s home looked something like a fort, a good-sized manor house, barn and stables, barracks for the men that worked for him, and a short wooden wall around the complex.  Needless to say, he was not happy when he heard about the dragon in the swamp, but he and his men were stymied as to what to do about it other than hide behind their wall.  They were honestly afraid; all of the people who heard were afraid, but Festuscato and the others assured them they had things well in hand and would resolve things before they had any trouble.  The people did not exactly trust the Roman, but they were willing to hold back for the sake of any man who could command elves and pixies to do his bidding.

“Ha!” Festuscato nudged Mirowen one evening when they were feasting in MacNeill’s home with Patrick, Gaius and MacNeill’s mother. They were six weeks into the dragon business at that point, and the dragon was into his long nap.  “Since when do you do what I tell you?” he asked. Mirowen said nothing, but Patrick interjected a thought.

“I don’t know.  She and you seem to end up in the same place even if you come from completely opposite directions.”  Mirowen and Festuscato looked at one another and shook their heads.

“True enough,” Gaius agreed with Patrick.  “She is pure and you are anything but.” 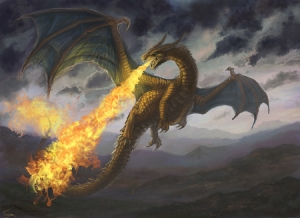 “That might have been true in the past, but not now that he has taken up with a dragon.  Madness.” Mirowen looked away.  MacNeill’s mother, Fianna dropped her eyes and wiped away a small tear, and MacNeill took a moment to show his concern for her.

“I am sure you have heard,” he said.  “My father was killed by the dragon some forty years ago when I was a small boy.  Many people died, including his druids who thought they could devise a way through magic and such things to control the dragon.”

“They were the first eaten,” Fianna interrupted, and Patrick responded to her.

“Trust in the Lord, the Almighty. He is the only sure and certain help in time of trouble.”

“Anyway,” MacNeill began again with a hard look at Patrick, not happy with the interruption of his tale.  “They say the dragon began in the Alps, burned its way across Gaul, and eventually crossed over the sea to settle in our fens.  Some say there were two of them in that rampage, but some say only one.  I can tell you, there was consternation in the lands all around here for forty years, on and off.  Leinster got burned regularly.”  MacNeill snickered at the thought.  “Anyway, about ten years ago it appeared as if the dragon moved north.  Ulster suffered, and maybe that encouraged some to accept the Roman offer cross the sea to live between the walls, I don’t know.” He paused to grin.  “I remember Lord Giolla, Leinster’s right hand man, sent a small army against the fens.  They did not fare well.”

“They got bogged down,” Festuscato joked, and to the looks of the others he added, “Well, someone had to say it.”

“Anyway,” MacNeill continued.  “About a year ago, almost two I suppose, everything stopped. No one knows why, but there has not been any word of any dragon in the fens for ten years, and for the last two, no word of any dragon in Ireland at all, until now.  Now, people are afraid to go into the fens again, and I say I can hardly blame them.”

“It isn’t like that,” Festuscato said.  “I can make a good guess what happened two years ago.  First of all, I would guess two dragons, and I would guess Mama dragon had her babies in the fens.  Papa dragon did his best to feed them for forty years, but by then the babies started getting old enough and big enough to be worth eating.  I would guess Mama dragon took her babies elsewhere, and Papa dragon followed.  No telling how it ended up.  At that age, more or less, the babies are old enough to escape and make their own way in the world if it comes to that.”

MacNeill and his fellows, Cormac and Murdoch all groaned at that thought of having the whole countryside covered with dragons.

“Anyway,” Festuscato used MacNeill’s word.  “I don’t know how it turned out between Mama and Papa dragon, but little Clugh got left behind because his wing was broken. He probably hid from Papa, and likely would not have survived if young Donogh had not found him.  The boy fed him and nursed him as well as he could for at least a year before we arrived.  Now, with Greta’s help, the wing will be properly healed, and then I just need to decide what to do with him.”

“We’ll make a raft so you can take him with you when you leave,” Cormac mumbled and Murdoch nodded in agreement.

“I should whip that boy,” MacNeill mumbled at the same time.

“The opposite, I would say,” Patrick objected to MacNeill’s thought, and Festuscato picked up on it.

“Donogh has proved himself to be clever and capable and fearless.  I would think you should help raise the boy.  He may prove very valuable in the future.”

“We may take him for the church,” Gaius suggested.

“Now wait a minute,” MacNeill put his hands up to hold off that thought.  “What the Roman says makes sense.  If he is as capable as all that, I may bring him into the fort and train him myself.”

“Lord MacNeill.”  A man stood in the doorway, reluctant to interrupt the event.  “The people from the village are coming in the gate. Sean Fen has sailed into the port with three ships and a hundred men thirsting for blood.”  Everyone stood except Festuscato and Mirowen.

Festuscato first threw his wash cloth down on the table. “What is it with this pirate?  Why does he feel obliged to interrupt my dinner parties?”  Before MacNeill could give answer to his man, Mousden came flying in, screeching and screaming.  He went straight to Festuscato and Mirowen where he squeezed between them and shivered. Mirowen did her best to calm the pixie. She got him to get big and made a place for him between her and Festuscato even as Bran, Dibs, and Seamus came tumbling in the door.  Dibs still carried his sword, and it looked used.

“They off-loaded some men in a cove a mile down shore and they came up to take the tavern at dusk,” Seamus reported.

“We would not have gotten out if Mousden had not distracted them with all his screaming,” Dibs added.

“Lord MacNeill.”  Another man came into the room.  “A message from Sean Fen.  He says send out the dragon and his men so he can exact justice for his men that were murdered.”

“Dragon?”  MacNeill looked confused until Cormac whispered in his ear.  “Of course, I had forgotten.”  He turned to Festuscato who sat looking calm and undisturbed. “Actually, that explains a little bit.”

“Lord,” the man was not finished.  “The druid with Sean Fen says send out the priests. There is a price on their heads.”

“Tell him,” MacNeill paused and looked at Patrick and his mother.  “Tell him I will do no such thing.  He will have to fetch them himself.”  MacNeill and his men sat again at the table and Gaius helped bring up chairs for Dibs, Bran and Seamus.  Dibs, Bran and Gaius looked and sounded almost as calm as Festuscato, but Seamus was new.

MacNeill got their attention.  “I cannot help you,” he said.  “Sean Fen is my cousin.  He was born in the fens, but when the dragons came forty years ago, his father, my uncle took him to sea, saying a dragon would not be interested in all that water with so little to burn.”

“Now Sean Fen has taken over for his father,” Fianna interrupted her son.  “He spends his days raiding Wales and sometimes Cornwall and Lyoness.  He is a horrid man.”

“He doesn’t get much for his efforts,” MacNeill added.  “And what he gets he wastes on drink and women, and buying the favor of men like Leinster.”

“But you can’t help us because he is your cousin.” Festuscato made it a statement, but MacNeill answered it like a question.

Festuscato sighed and stood at last, so the other members of his company stood as well.  “Might as well go see what Sean Fen has in mind,” he said.

“Might as well,” Patrick agreed, and the priests followed Festuscato and his company out the door.  Mirowen held tight to Mousden’s hand, and Fianna followed her and remarked how she was not aware Mirowen had a son, and so big, and she was so young.  Mirowen did not bother to correct the kindly old woman, but with Fianna along, MacNeill and his men also followed, curious about how things might turn out.

Festuscato let go of his comfortable clothes and called for his armor and weapons as he exited the home.  Dibs and Bran took a bit longer as they unwrapped their dragon tunics that they kept folded and hidden in a secret pocket they had built into their own version of armor.  When they climbed the five-foot rise that was just inside the nine-foot wall that allowed a man to stand and look down on an enemy, Mirowen put Mousden in Fianna’s hands.

“You stay with this nice lady,” Mirowen said. “She is the mother of the Lord of this castle and there are no safer hands you could be in, so stay with her and stay big.”  Mirowen meant it.

“Yes, mother,” Mousden teased, and stuck his tongue out at her.