The sun came up over the sea to reveal a sail angling to cut them off.  Festuscato squinted, but Captain Breok recognized the ship right away.  “Our Pictish friends,” he said, and sighed, and set about getting the sail down and running his crew through their litany of please don’t kill me.

Patrick came up with a word.  “I noticed last time you asked Mousden for the small bag. I would guess Captain Keravear decided there must also be a big bag somewhere.”

“They were probably waiting just out from the docks at the Inver-dea.  Probably saw us pull into port and thought to try their luck on our way back out to sea,” Treeve suggested.

“But they had no way of knowing we would be on board again,” Gaius countered.

“True,” Treeve responded.  “But it was worth a shot, and if you were not on board, there would probably be a cargo worth something; and Captain Breok has his crew so well trained to cower and not resist.”

“They probably also decided that your water sprites did not really pose a danger,” Patrick added.  “I mean, what can a blob of water really do to hurt them?”

“Give them a bath, I bet,” Gaius said, as Bran and Dibs walked up.

“What’s the plan?” Dibs asked, not that he expected an answer. 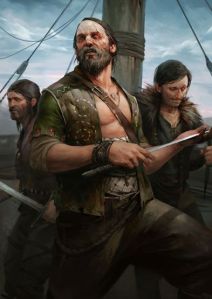 It took an hour for the Pictish ship to come along side and tie up.  It looked the same as last time, with Captain Breok and his crew in the bow showing the epitome of respect and abject cooperation, and Festuscato and his people in the stern, lined up like a group awaiting a family photo.

“We talked about it,” Captain Keravear started right in.  “Seeing all those water waves up on the deck was a bit of a shock, I admit, like seeing your pointy-eared woman and that demon, but then we talked about it. Maybe you are the Dragon and maybe you are not, but we figure there are only three of you and lots more of us. So the way we figured it, you should give us the rest of whatever gold and coins you have and we will be on our way.”

“Captain,” Festuscato’s words were sharp.  “You have already been paid for your trouble and I am not in the habit of paying for the same service twice.  There may only be three of us that you can see.  I won’t say how many more may be waiting in the cabins and below deck.  You know I have at least one elf who is quite capable of going unseen among humans. You also know the elf answers to me. Do you really want to know how many more may be on board?”

The Captain paused.  Apparently, these were things he had not considered.  There could easily be others in the cabins and below deck hidden and waiting to come when called.  At least one of the Picts took the thought of invisible elves seriously. He jumped when the wind picked up and shifted his hair around.

Then the wave came, and like the last time, everyone had to splay their hands and feet to keep from falling down.  This time, the deck not only got covered with water sprites, but they came with a person.  He looked tall, lean, and naked but for the seaweed that clung to him. His gray skin appeared the color of cold steel, and his eyes glowed like the furnace.  Pict and Cornish sailors alike shrieked and turned away.  Some fell to their knees, covered their eyes and trembled.  The Pictish Captain dropped his jaw and bugged out his eyes but otherwise appeared frozen in place.

Festuscato’s crew remained more composed, though Mirowen and Mousden dropped their eyes as a sign of respect.  Patrick showed no surprise when this sea-monster of a man came right up to Festuscato and dropped to one knee.  He was slightly surprised by the one word the monster said.

“How did you figure it out?” Festuscato asked.

“Really?” the man-monster responded.  “You have been broadcasting who you are from Rome to Britannia, and really since you took a governess.”

“Mannanon,” Captain Keravear exhaled the name of his supposed protector while Festuscato tapped his foot.  With a glance at Patrick, Festuscato went away and let Danna, the mother goddess of the Celts come and stand in his place.  She stepped up and bent down to kiss the man-monster on the head while she spoke and helped him to his feet.

“You bad boy.  When are you going over to the other side?  You are late, you know.”

“Soon,” Mannanon said with a grin, and an appearance that suddenly did not look so monster-like.

“Well, this is your lucky day.  This is Captain Keravear.  I believe you have met, and I have already paid him for his trouble and I will not be paying him twice.  Will you please take him and his crew and their ship back to the Caledonian shores where they will be too far away to cause us any more trouble.  I have these holy men to deliver to the Irish.”

“Yes,” Mannanon said, with a glance at the Priests. “The new way.”

“And it is a good way, and why you should not be here,” Danna insisted, as she turned Mannanon away from the clerics and toward the Picts.  “Now, please take out the garbage, only don’t hurt them.”

Danna appeared very tall for a woman, but Mannanon stood a good bit taller, like a basketball player, but with the slim build of an Olympic swimmer.  He leaned over and kissed Danna on the cheek.  “Kind heart,” he said, and smiled a sort of Bran smile, and vanished along with Captain Keravear and his whole crew and ship.  Danna traded places with Festuscato right away so he could deal with the questions.

Captain Breok wasted no time.  “Get the sail back up.  Colan, get aloft to see if there are any more sails on the horizon.  Treeve, go get Gerens out of the hold.  Tell him it is all over so it is safe to come back out.”

Festuscato stepped up to his spot on the railing where he could keep out of the way.  Mirowen took Mousden to the cabin.  Bran and Dibs helped lower the rudder.  Only Patrick and Gaius came up with a question or two.

“Who was that?” Gaius asked.

“An old Celtic sea god, and a bad boy who does not belong here,” Festuscato answered.

“And the old way needs to be gone,” Festuscato agreed.

“And the other side?” Patrick asked.

“Death,” Festuscato answered.  “As near to death as a god can get.  He needs to give up his flesh and blood and become the pure spirit he is, the true force of nature he is without eyes and ears or any senses in this world.”

“And who was that woman?” Gaius asked.

“The mother goddess of all the Celts, and another one who does not belong here,” Festuscato said and sighed.  “I lived her life eons ago.  Before Christ, nature bore witness to the truth, but now the old ways need to be gone.”

They stood in silence for a time before Patrick asked one more question.  “Were you there?”

Festuscato nodded as if he anticipated the question. “When he was born and when he was crucified, but those stories have not been told.  Someday.”  Festuscato quieted, and Patrick looked again at the sea.

“I will pray for you,” Patrick said.

“Good,” Festuscato responded.  “I need all the prayer I can get.”

Captain Breok took them to a port that straddled the land between Leinster and Ulster.  The Lord there, a man named MacNeill, had no love for the King of Leinster, and at the same time, he had not been in a place to be pestered by Palladius so the gospel might receive a fresh start.  Patrick got excited and said surely this is the place, but when they docked, they found a reception committee.  MacNeill had his two roughs with him, Murtagh and Cormac, and behind him were three clerics, the survivors of the work of Palladius, Teigh, Aon, and Seamus.

“Come,” MacNeill said with a big grin.  “I have set the barn for you to hold services after your fashion.  Fathers Teigh and Aon and their wives have made the bread and gathered the wine and the women and children are gathering there.”

Patrick did not know what to say.  He hardly knew where to begin with married priests and church in a stable.  Mirowen nudged him.  “I asked my Uncle Macreedy to let them know we were coming,” she said.

“Is everyone in your family named Macreedy?” Festuscato pulled Mirowen aside and asked, though he would know the answer if he thought about it.

“The males, mostly,” she responded quietly, as Patrick finally spoke.

Gaius turned to Festuscato.  “The Bishop will take it from here,” he said to suggest Festuscato back up.

“It is all yours.”  Festuscato smiled, hoped things would work out this time, and he took Dibs and Bran to speak a moment to Captain Breok.  Eventually, they would need passage back to Britannia, but for now they headed to the nearest tavern, and Treeve and Colan followed.  MacNeill and his roughs also followed them, but from a distance, so Festuscato thought to stop and let them catch up.