The horses panicked.  Many stampeded with the mules, fortunately straight at the Saxons. Many men got stepped on, and many more Saxons got stepped on as well.  The quake felt strong.  Gerraint half expected the Earth itself to split wide open in a magma chasm and explosion. He could only picture bombs by the gigaton.   He tried to estimate the time in his mind, but the quake never stopped.  It seemed forever, and all the counting of seconds in Gerraint’s head meant nothing.  He lost track.  He rolled on the ground and tried to keep his face free from slamming into any rocks. He expected giant boulders of granite to strike up through the ground at any minute.  Then finally, the quaking subsided.

Martok, a lifetime Gerraint would not live until several thousand years in the future spoke into his head, like it was his own head thinking.  “An unbelievable four hundred and thirty-two seconds, and the epicenter was west…” Martok’s voice faded because Gerraint did not have time for that.  Ten of the twelve small catapults were salvaged.  The flammable balls were fetched from wherever they rolled.  All of his horsemen were now horseless, and some had lost all their weapons in the process.  Bows and arrows were the first concern.  A strong line, three deep was established against the Saxons in case they did charge.  Men were sent back to the hill camp to fetch whatever weapons they could find.  Some men had only the knife at their belt. Gerraint set the weaponless men to carting the wounded back to the camp.  Some of the men who were stepped on by horse or mule refused to leave the battlefield, but some had broken arms or legs and had no choice.

The Saxons were slower to recover since most of Gerraint’s men were trained to battle, while most

of the Saxons were not. When the first flaming ball hit the Saxon line, some of them were still just standing up. Soon enough, balls of fire started splattering everywhere in the Saxon line, and the Saxons were near panic. Even then, their commanders refused to attack.  Most of the fires could be avoided and went out when their fuel was spent, but added to the Saxon broken arms and legs, some were badly burned, and this did not raise the Saxon morale.

The Saxon line backed up, slowly, determined to hold their ground and wait for the British to attack.  Gerraint took that opening to walk down the line and repeat his orders.  “On the signal, run forward a hundred paces.  Fire three volleys into the enemy and then return here.”  He said it about ten times as he walked down the four hundred men, three deep line.  When he got good and hoarse, he stepped to the front, raised his sword and yelled, “Now!” as he lowered his sword.  The men performed well, though not without flaws.  On the third volley, there were some arrows in answer, but not many.  The Saxons looked to be having a hard time getting organized, but they were perfectly capable of backing up further toward the trees that ran right up the ridge.

Gerraint’s eyes were distracted for a moment as the three thousand or so Saxons who filled the flat gap between the two ridges turned and attacked Bedwyr.  Whoever was in charge there clearly judged Gerraint as the lesser threat, or maybe he wrote off Gerraint’s Saxons as lost.  Arthur got bogged down at the top fighting on foot against the Saxon cavalry, also on foot.  He was in no position to protect Bedwyr’s flank with his horsemen as had been the plan. Meanwhile, the influx of as many new troops as the British started with would devastate the British, whether the Saxons were fighting uphill or not.

Gerraint could not worry about that just yet.  He suddenly got a clear picture in his mind, and he imagined that earthquake must have shaken something loose in his brain. He saw Deerrunner and a host of little ones right at the edge of the trees.  All he thought was now, and the Saxons in front of him started to fall as they were pelted by arrows from behind

“Here, Lord.”  The boy stood right beside him.

“Help get what spears we have to the men in the center line.”  He ran off. “Uwaine.”

“You take the other side.  The men need to walk in formation and hold the formation to be effective.”  Uwaine nodded but Gerraint felt unsure if Uwaine really understood.  “Spears to the center line and point them at the enemy. Swords in the front.  Bows in the back line.”  The men took a little time getting adjusted, and Gerraint waited as patiently as he could.  Then he shouted again.  “Walk.” He heard Bedivere and then Brian and finally Uwaine repeat the word down the line.  “Walk them into the woods.  They won’t escape from the woods.”  Walk them into the woods at least got repeated.

Gerraint heard a giggle by his feet.  The Little King imagined what might be in the woods.

“Stay in formation.”  Gerraint yelled that several times and it got repeated several times. Then Gerraint mumbled, “Where’s a good Roman phalanx when you need one?”  The Little King giggled again.

The Saxons, still with twice Gerraint’s twelve hundred men, did not like the look of that formation.  Some fought, and lost.  Some of the British simply could not wait and ran out to engage individual Saxons, and sometimes won.  Many of the Saxons broke for the woods, and as promised, they did not come back out of the woods.  Some of the Saxons finally surrendered and Gerraint heard a loud “pssst!” 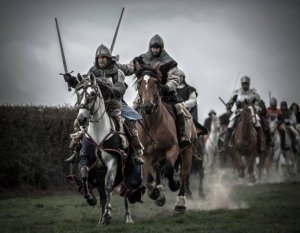 Lemuel the gnome stood there, and his people had gathered and calmed five hundred of Gerraint’s horses so they were ready to be ridden.  “Last one up is a rotten egg,” Gerraint yelled and mounted the nearest steed.  The cavalry of Cornwall raced to the horses, but by then the foot soldiers had come up, picked up fallen Saxon weaponry where needed, and they could easily handle the surrenders, with the help of some dwarfs and elves who should have known better than to expose themselves.

Only then did Gerraint allow himself to look at the other side of the battle.  Bedwyr’s men were being driven back to the woods.  Arthur’s men appeared to be gaining the upper hand, but looked in trouble as some of the Saxons at the back of the pack down below decided to help out their horseless cavalry.  Two things happened then that would validate history for years to come.  Over that ridge came twenty-five hundred men from the north under Kai, Loth and Captain Croyden.  They swept over Arthur’s position and slammed into the Saxons, once again gaining the upper ground for the British.  Then Gerraint called for lances even as he took an arrow in the leg. He spied the archer, and that man became a pin cushion so by the time the man fell, it was hard to see the man beneath all the arrows.  The dozen Saxon bowmen who were with him instantly discarded their bows and fell to their knees, trembling.

“Ready.”  Gerraint yelled as he reached down and broke the shaft of the arrow in his leg.  He decided he had one more shout in him. “For Arthur!”  The riders responded.  “For Arthur!”  and that charge broke the back of the Saxons for good.

Very little quarter was given that day.  With Kai and Loth’s men added, some ninety-five hundred men fought for Arthur.  Roughly half of them would never go home, and a third of the ones who made it home, died in their beds from wounds sustained on the battlefield.  Of the twelve thousand Saxons who fought in the campaign, less than two thousand survived for any length of time.  The Saxons and Angles from East Anglia to Wessex were devastated.  Even with further immigration from the Germanies, it would be a generation before they could mount any sort of serious offensive.

After that generation, though, some enterprising Angles exploited the animosity between the Scotts and Danes and move into the wide land between the two.  That land was called Bernicia before they joined with the Saxons in Deira to form Northumbria.  The Danes stopped coming to Britain for a time, though when the Vikings started coming three hundred years later, they were surprised to find people who knew their customs and ways and who claimed to be of Danish descent.

Loth’s family moved full time to Edinburgh and ruled over many of the Scots there.  Kai’s descendants held on to Caerlisle and made a pact with some Scots in the west to form the kingdom of Rheged.  York stayed independent for a time as the Kingdom of Elmet before it became tributary to Northumbria or Mercia at one time or another.

The British Midlands became Mercia surprisingly quickly, as the Saxons finally moved out of the coastal fens and alluvium to farm the bountiful land.  Likewise, the Saxons in Wessex slowly took more and more of the west, taking Southampton, Dorset and Somerset, and finally swallowing a large chunk of Devon itself. But like the Romans, they never really went further west than the old Roman town of Exeter.  Cornwall remained proudly independent, if not entirely free. Wales also remained free of Anglo-Saxon influence for centuries.

Most of this is now in the history books, but not all. There were aftershocks from that devastating earthquake, but they only amounted to ten or fifteen seconds of mild tremors.  The damage had already been done.  On the day of the Battle of Badon Hill, Lyoness sank into the sea.  One part of the sea bed pushed up in a peninsula, but the main part of Lyoness, that great forest covered land. got swallowed by the ocean.  Her great wood-built towns and villages were broken up and floated off in every direction. The Scilly islands sank a bit more so some became too small for even a single small farm. The center of Cornwall itself pushed up with granite until it became like a spine through the land. But mostly, the people of Lyoness, including Geraint’s sister, did not survive.

Bedivere did not know about his mother when he fought on the battlefield.  He thought he was weeping only for his father, Melwas, who sustained a terrible belly wound and counted himself lucky to die in a few hours instead of lingering for days or even weeks.  Gerraint comforted the boy, as did Uwaine, even while Uwaine yelled at Gerraint for being so stupid as to get himself shot.  The Little King tended Gerraint’s wound and got the arrowhead out cleanly. He said he had done this many times for his own men, and was expert at it.

“You must keep it clean and with clean bandages,” he said.  “And it should heal without infection.”

“Yes, doctor,” Gerraint slurred his response through the alcohol anesthetic, now that his leg went completely numb, and for that matter, so was the rest of him.  He only felt able to smile when Arthur found him and yelled at him.  Then Percival did the same.  Last of all, he came face to face with Pelenor, his old master, and Pelenor lit into him.  Gerraint had only one thing to say to the man when the man paused to take a breath.