Gerraint mounted, waved to those present, with a special wave to Flora who watched both her sons go off to war, and he took Bowen and Damon to meet Lancelot and Lionel.  It did not take long to plan what they would do.

Gerraint would take Damon and a hundred men down the forest path, to where they could hit the Saxons on the flank.  Bowen, the elder brother, would guide Lionel, Lancelot and the four hundred to the place of the fallen tree, as they called it.  Then they would cut straight to the mountain village from there and strike the Saxons from the rear.  The plan seemed simple enough, but Gerraint would arrive two hours ahead of the others, so he would have to remain hidden and quiet for a time, and wait.

Gerraint and his men reached the edge of the wood around three that afternoon.  They could see the village from there, and saw it burning brightly.  The Saxons were on foot below a cliff face, their horses kept back in Gerraint’s direction, away from the fire and smoke.  There were several cave openings that could be seen in the cliff, some ten or twenty feet up the rocks.  It looked like the Little King gave up the village begrudgingly. Gerraint, with his fairy good eyes, counted more Saxon bodies than British ones.  Now, the Saxons were below the caves, but behind cover where the arrows could not reach them.  It looked like a stalemate, as long as the Little King’s supply of arrows held out.

Gerraint, Sergeant Brian and Damon sat at the lookout spot, though Gerraint was the only one who could see clearly at that distance.  The others could only make out the gist of what was

happening when Gerraint pointed things out to them.  They waited a half hour, which seemed an eternity, and a true little man came up to Gerraint, right out in the open, and removed his hat out of respect.  This man stood only two feet tall, what one might call a gnome or nature spirit, and Gerraint quickly realized the man had to be invisible to the others, so he did not let on that they had a visitor.

“Lord,” the gnome said.  “The Saxons are building ladders and are about done.  They have many men hidden behind the big building that is not burned, and plan to attack all at once with the ladders.  Some are going to places where they can hide behind cover and shoot arrows at the cave openings.”

Gerraint picked up his head for a better look, but the smoke and remaining buildings in the village made things difficult. “Thank you Lemuel.”  Lemuel was the gnome’s name. “You know what would be really good?  If those Saxon horses broke free of their binds and tethers all at once and stampeded right across the base of the cliff face.  It would be especially good if that happened when the Saxons came out with their ladders.  Do you understand?”

“The Saxons have ladders?”  Brian squinted his eyes.

Lemuel answered at the same time.  “I understand.  That should not be hard.”  He scooted off and vanished in the tall grass while Gerraint slapped Damon on the shoulder.  “All right, son.  Let’s get the troop up and ready to ride.”

“What?  Aren’t we supposed to be waiting?”

“Not if the Saxons have ladders,” Brian said.  “Fat chance those horses will stampede, though.”

“Trust in the power of positive thinking,” Gerraint said, and trust in luck, or Lemuel, he thought.  It felt like a lot to expect a gnome to get it right and not stampede the herd too soon or too late, but the edge of the herd was all he could see from horseback because the trees stood in the way.  He had to trust.

Gerraint separated Brian and thirty men from the rest of the troop.  They got torches and had special instructions to ride the back street of the village. They were to set the last of the buildings on fire, the ones that the Saxons were using for cover, in order to drive the Saxons into the open.  He gathered the rest of the troop and gave easier instructions.  He called for lances and then they waited.  It amounted to ten minutes sitting on the horse.  Brian began to think Gerraint had lost

the nerve, but suddenly the Saxon horses broke free and they could hear them as they rumbled out of sight.  Brian grinned and went to lead his group while Gerraint yelled to the seventy.

“Ride along the cliff straight through to the other side to drive their horses out of reach.  There, we will turn and charge at them again.  Ready?  For Arthur.”

The men responded and charged.  When they came around the edge of the forest where they could see the battleground, they saw the last of the Saxon horses trampling along. Honestly, Gerraint did not have to ride through to drive the Saxon horses out of reach of the Saxons.  Most of the smoke and the smell of the fires being blown in that direction encouraged the stampeding horses that were not going to stop until they cleared that area.  Still, Gerraint had long since determined that men with lances had the advantage riding through the lines.  Once they stopped to fight it out, they became like an awkward Gerraint fighting the Little King.  The horseman had the height advantage, but the flexibility stayed all with the man on foot.

The Saxons, who had thrown themselves up against the foot of the cliff when the horses came, recovered what ladders they had left and renewed the assault.  More men came from the village, so they had a crowd at the base of the cliff when Gerraint and the RDF plowed into them.  Some Saxons thought the stampede was over and were surprised.  Some thought it was another group of wild horses from the same pack.  Some only belatedly realized that these horses had lancers on top.  For quite a number, it was the last realization they ever made.

Gerraint formed up his line while Brian finished and came to join him.  Brian lost six men somewhere among the fires and smoke.  Gerraint turned at the front to yell.  “We go straight through again and sweep the Saxons from the cliff. When we get to the other side, we turn immediately and charge to stay and fight.  Remember, you have height on horseback, but quarters are tight among the wreckage.  Do not hesitate to dismount if it is to your advantage.

“Straight through.”  Gerraint turned.  “Once more into the breach,” he whispered before he yelled, 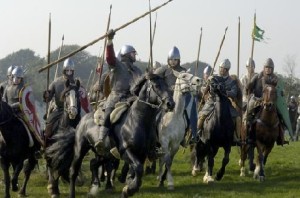 “For Arthur.”  Again, the troop responded and charged.  Some bright Saxon chief had gathered a few archers, but it seemed a pitiful thing.  The troop easily swept the cliff base clean of Saxons.  The Saxons had to run for the now burning buildings.  Some ran further into the charred remains of the rest of the village.  Some did not stop running when they reached the village edge.  Gerraint gave those last ones no thought at all, knowing that Dayrunner would not let any of them escape.

When Gerraint turned the troop for the final charge, he saw that his hope had not been misplaced.  Rope ladders came down from the caves and some fifty men followed the Little King into battle.  That evened the odds a bit, but Gerraint knew this would be where things got tricky. The RDF wore a virtual uniform and were easy to distinguish, but telling the men of the little King from the Saxons might not be so easy.  He told Damon to stay by his side, and then they charged.

The Saxons were already beaten in their spirit and it became only a matter of cleaning up the mess.  On a normal battlefield, more than a hundred would have escaped, at least on foot, but in this case, none made it out of the woods. Gerraint and his troop fought well, but the Little King and his fought with a raw vengeance.  They let none escape, even if they were trying to surrender, and Gerraint did not yell at them until the end.  There were fifty on their knees at the end, twenty of whom only escaped out of a building right before the burning roof collapsed.  The Little King counted his survivors apart from the women and children that were safe up in the caves.  Gerraint lost some men, but few when compared to the Saxon losses. 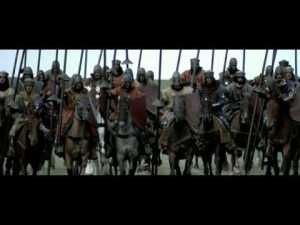 “Me too,” the Little King agreed.  He eyed their prisoners and wondering if the village had enough rope left to hang them all.  They paused when they heard the four hundred thundering across the fields. When they arrived, they slowed as Lionel and Lancelot quickly assessed the situation.  Lancelot bounded from his horse, ran up to Gerraint and complained.

“The Saxons had ladders,” Brian said gruffly. “We couldn’t wait.”