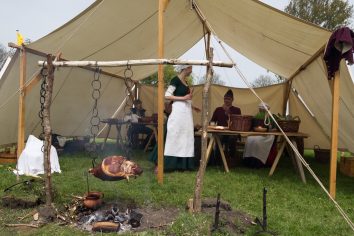 Gerraint got an arrow and set it down on the table that held the chess pieces they were using to represent the enemy formation. He set the point right at the space between the two legions.  “Greta says we need a flying wedge.  Look at the shape of the arrowhead.  The knights of the lance can hold that shape.  All we have to do is stay between the lines.  We will break through and divide and circle back to hit the Romans from the rear.  Even the vaunted Roman phalanx cannot stand up to heavy cavalry, especially when attacked from the rear.

“Claudus has kindly left us this rise and these woods. He expects a dawn attack, but we should have no trouble rearranging our men under cover of darkness.  Hoel’s footmen will move here, to strike the Roman left flank.  Arthur’s footmen will move here, by the lake to strike the Roman’s right flank.  With attacks on their sides and rear, the Romans will crumble, but they will have only one place to run.”

“Yes,” Hoel said with a slight touch of worry.  “Right up this rise to where we are presently standing.” 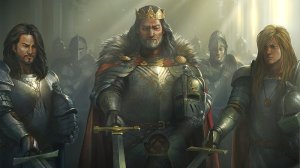 “That is why we leave a thousand of our men, all our best archers, hunters here between the two groups of foot soldiers.  I have a thousand more, excellent archers, with axe men and men good with a blade to back them up.  Do not ask where they come from.  Do not ask about the knights of the lance.  Just trust they are on our side.”  Gerraint took a breath.  “I want this over.  I miss my family and I want to go home.”

“Where are these men of yours?” Grummon immediately asked.

“Trust me.  I have wings to fly that you know nothing of.  Eyes that see further, ears that hear better,” Arthur and Percival joined him at the last.  “And a reach longer than ordinary men.”

“Aha,” Feswich imagined the flaw.  “But you have forgotten the Roman cavalry.  As we fall on the backs of the Roman foot soldiers, they will fall on our backs to great harm.”

“You let the knights of the lance take care of the Roman cavalry.  When we divide to attack the Romans from behind, the knights will continue straight at the Roman horses.  I expect that struggle will not take long.”

“I have seen three of your knights,” Hoel said.  “Show me what you are talking about.”

Gerraint nodded toward the tent door and Arthur said, “Come.”  They stepped out and found two hundred horses standing in perfect rows and so perfectly still and quiet, everyone gasped, audibly, except Gerraint, and maybe Arthur. The Knights dipped their lances to the ground as the one knight had to Gerraint, Arthur and Lancelot in the forest. Then, without a word, they dismounted and fell in unison to one knee, holding tight to their shields, and their huge horses did not budge one inch.

“They will hold the formation,” Gerraint said. “All we need to do is ride between the lines.”  Gerraint smiled before he jumped.  Feswich started to reach for a Knight’s visor to see what lived inside all that metal. “No!  Don’t do that.  You don’t ever want to do that.  It is a great sin, and certain death to look upon a knight.”

Feswich paused.  The church presently only had a foothold in Amorica so the concept of sin was not widely understood, but the words certain death sounded plain enough. He wanted to say something, but Gerraint spoke over him.

“Please go prepare for the dawn attack, and ask Yin Mo to meet us in Arthur’s tent.  We will be there as soon as we can, and thank you.”

The knights said nothing.  They mounted again in unison, peeled off row by row and headed back into the woods.  Only Gerraint seemed to notice, but it appeared that the knights had been standing on top of some other soldiers and tents with no affect and without those soldiers seeming to have noticed.  But by then Arthur began to lead the others back into Hoel’s tent to finish the conversation and finalize their plans.  Gerraint said nothing.

Two hours later, Gerraint, Percival and Arthur returned to Arthur’s tent and Arthur said it was a good thing they had the fort as a fallback position, if needed.  Percival started on an entirely different track.

“You know, now having seen real knights, every young man in Britain, Wales and Cornwall will aspire to be knighted. Probably everyone in Amorica, too.”

“I assume that was where the word knight came from,” Arthur picked up the thought and directed his non-question to Gerraint.”

“Yes,” he said.  “And history.  Soon enough every young man in Europe will want to be knighted.”  And he entered the tent and yelled.  “I said a hundred, like in Greta’s day.”

Yin Mo, now an elderly elf with a long white beard and hair reminiscent of Meryddin, looked unfazed.  “You said no more than Greta’s day, and there will be no more.”

Gerraint frowned.  He remembered Greta in the Temple when the battle took place, so she was not in a position to complain about there being more than a hundred. Gerraint wanted to yell again, but he figured he got committed, and Yin Mo was the expert on the Knights and their capabilities.  Gerraint decided not to pry.  He said simply, “Thank you,” and the elderly elf gave a small bow and faded slowly from sight until he disappeared.  Percival spent the rest of the evening squinting.  He did not mean anything bad by it.  He just tried to understand, but Gerraint had forgotten Yin Mo had such oriental features, and that was a very strange sight in Arthur’s part of the world.

Arthur’s men and Hoel’s men moved like union garbage men at four in the morning.  Bing, bang, crash.  Surely, they were telegraphing their plans, Gerraint thought. The archers had all been selected and they took up their position.  The horsemen saddled up and stood around, Hoel’s men in particular talking in uncertainty.  Many said this would not work.